The MMO That Changed the World Returns With WoW Classic

Blizzard announced during Blizzcon 2017 that WoW Classic servers were on their way after years of anticipation. Ever since Wrath of the Lich King, fans of World of Warcraft have wanted official Blizzard servers set in the base, vanilla experience of the original in 2004. J. Allen Brack, the executive producer of World of Warcraft definitively said Classic servers would never release at Blizzcon 2013, following the “No!” with “and by the way, you don’t want to do that either. You think you do, but you don’t.” Well, despite the conflicting statement, WoW Classic servers are officially live and available to anyone with an active World of Warcraft account on PC or Mac.

After the success of World of Warcraft Classic breathing new life into the dying franchise, we can definitively say: No, J. Allen Brack, you think we didn’t want to do that, but we did. Twitch views are up, WoW Classic YouTube content is flooding the platform, Blizzard hasn’t given us official server population numbers, but judging from the plethora of people on the one server I’ve played on so far, it’s safe to say that the World of Warcraft is as alive and well as ever. Especially considering the current client of the game isn’t experiencing a complete lack of players. No matter how you slice it, WoW Classic has done for the aging MMORPG what several of the expansions couldn’t do: maintain hype and engagement for more than a couple of weeks.

Then Versus Now, Alliance Versus Horde

Classic WoW returns gamers to the original Azeroth that started the World of Warcraft machine (specifically patch 1.12) that took the leadership role of the MMO genre and maintained it to this very day. While many of the best things from Vanilla WoW are alive and well in WoW Classic, it also features several of the same bugs, imbalances and other quirks that made it great. Action bars are once again packed with abilities and talents which were stripped from the game in Mists of Pandaria in an effort to appeal to casual gamers.

The community carries the Classic World of Warcraft experience as it did fifteen years ago. In my experience, I came across multiple examples of people helping each other and me. I watched high-level guildmates help their friends through zones full of enemies with Skulls and question marks indicating their levels. I requested a tailor in trade chat and they’ve made every bag I’ve equipped ever since. I saw people giving coin to complete strangers so that they can obtain their new skills, which is no longer a thing in today’s version. None of this would have been appreciated for what it is if WoW Classic had the layering system of the live version of the game which combines multiple servers to populate the world around you. If you make a character on Smolderweb, that’s your server. When you play on it, you’re playing with other people from Smolderweb and although people have manipulated the toned-down version known as Sharding, the system is mostly foolproof according to Blizzards internal testing.

Enemies are stronger than they are in the current version, just because their level is grey to you doesn’t mean you’re just going to one-shot it. Currency is harder to come by and the Auction House is flooded with materials and other necessities that would otherwise net you a nice profit. Expect to die a lot whether riding solo or grouping with friends and when you aren’t dying, make sure you’re eating or drinking. Dungeons are particularly tedious this time around as many gamers didn’t experience vanilla or avoided the private servers that were around (RIP Nostralius) so they’re handling dungeons like they would in the current version of the game. To get a group going for a dungeon, you have to do it the old-fashioned way: spamming local and/or Trade Chat for members to join you, then running to the specific dungeon or raid. There is no pressing the I key then being instantly teleported to the dungeon after dancing naked on the Crossroads mailbox while in queue, you’ll have to actually know where to go and what to do. 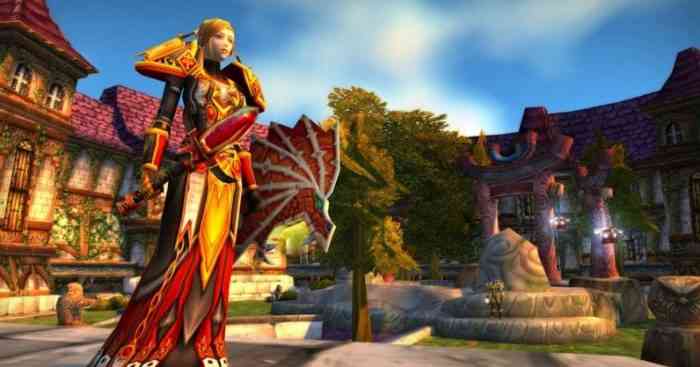 The community is as amazing as it was in Vanilla World of Warcraft as the veterans such as myself step up to the plate to help the newbies. While there are a handful of level capped 60’s, most high leveled people I encounter are in the 50+ range as leveling in classic is no joke. Though the live version of World of Warcraft has a lot of great things to offer between the voice-acted cinematics and the crisp combat animations but there’s an amazing charm to WoW Classic that hasn’t been replicated since the Burning Crusade came out. There’s a vastness to the world of Azeroth before the Cataclysm shattered and molded it. There’s a uniqueness yet a familiarity with each of the races and classes that even the most seasoned Warcraft veterans don’t share with the Pandarens and the Goblins or the Monks and the Demon Hunters. I always heard you can’t come home again, but this is the first time in my adult life that I have seriously questioned that phrase and I like to think Blizzard is in the same boat.

World of Warcraft Fans Want Dragonriding to be Permanent
Next Top 5 Video Games Arriving in October 2019
Previous Gears 5: Top 7 Tips To Help You Dominate in Versus Mode