Developer Taito is revitalizing Bubble Bobble after a lack of releases for a decade. Being the first Bubble Bobble in ten years, Taito emphasizes four-player co-op as the main feature of the game as previous Bubble Bobble games only allow for two-player. European Nintendo Switch owners will be able to play Bubble Bobble 4 Friends November 19th and North American fans will receive the dinosaur platforming classic in 2020. 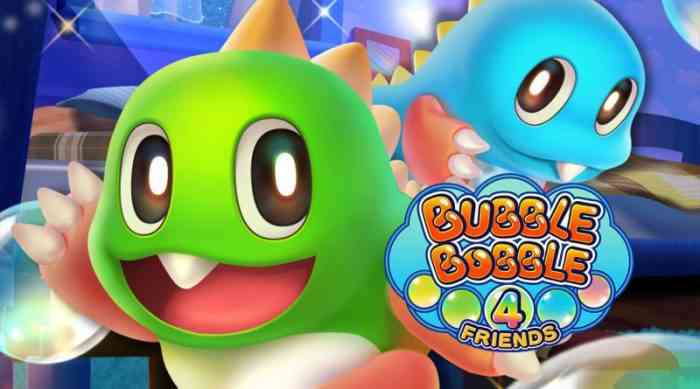 Bubble Bobble’s last title was a 2010 mobile release but the release of Bubble Bobble III was in 1995 so it’s a big deal the Nintendo Switch is exclusively getting Bubble Bobble 4 Friends. The new game features the familiar adorable dino mascots with a richly vibrant colour scheme. Taito is familiar with reviving franchises that have been dormant and fans have been anticipating the release of a Bubble Bobble title for years. Given Nintendo’s history with Taito, the Switch is a great console for a game like Bubble Bobble because of the co-op nature of the console, being able to turn one controller into two easily. We’re curious how Bubble Bobble 4 Friends will combine their game design of handheld games and console games for the main hybrid console on the market. The new four-player cooperative mode is expected to be the main attraction to the game for Switch owners as it’s a very multiplayer focused console. Bubble Bobble 4 Friends will likely use Switch Online to connect people who can’t play together in person.

The charming trailer is full of nostalgic scenes upgraded for the high definition of the Nintendo Switch. It’s apparently geared towards kids but if you grew up playing Bubble Bobble in the 80’s or 90’s, this should tempt you as well. Did you play any of the older Bubble Bobble titles? Are you hoping this ends up on another platform? Let us know in the comments below!