Whilst Arrow Heads raised the hopes of many during PAX West, its release was met with very mixed feelings across the board. It has a colorful art style, an announcer with a voice like smooth honey, and gameplay that, for the most part, I enjoyed. So what happened?

Arrow Heads has two game modes to dive into; a free-for-all PvP match where you fight against three others, and an arena mode where you fend of hordes of bears either on your lonesome or, again, with up to three others. The controls are simple and easy for anyone to pick up, which is a necessity for party games, but the aiming felt incredibly clunky. You aim and shoot by holding down the right stick in the direction you want to fire in, and then releasing it when you want to shoot. It seems simple enough, but the odds of it actually landing where you want is very low.

Each area you fight on is littered with environmental death traps to add some variety to each map, but after a while, you’ll have played every map and things begin to get a bit repetitive. That isn’t to say the maps aren’t well made; each map has unique little twists and some wonderful graphics and character designs that make Arrow Heads stand out from most other party games.

“Arrow Heads relying heavily on its multiplayer would be fine if it had a consistent player-base, which, sadly, it does not.”

To spice up the combat even further, there are powerups that each player can generate by picking up little blobs of honey. These powerups only last for a few seconds but buff your weapon with a random attribute such as firing missiles instead of arrows, or an instantaneous laser beam. Some powerups are even dropped into the map and create a stampede of players rushing over to it.

I enjoyed these game-modes for the most part, but the problem I’ve been having is finding anybody to play it with. I had a lot of trouble finding even one person to play with, and with a game as reliant on multiplayer as Arrow Heads, that’s a pretty big issue. I’ve never thought of a small player-base being a negative point for a game, as it has nothing to do with the actual game. It becomes an issue, however, when a game focuses solely on the multiplayer aspects and doesn’t leave you much to play around with in single-player; no AI to replace the people, and no real progression to give you a reason to play once the gameplay starts to go stale. 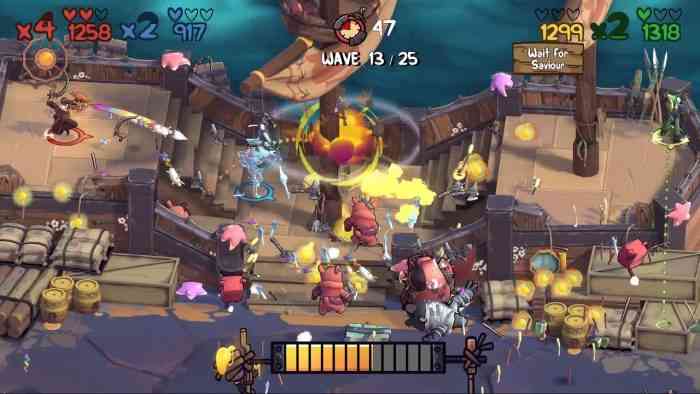 Whilst Arrow Heads certainly supplies an online platform to easily find people with, I have yet to be able to find anyone. Even now, as I’m writing, I’ve had it open on my other monitor for almost half an hour and have matched with zero people so far. I’ve even refreshed it a few times just to make sure. The lack of players in this multiplayer game makes me worry, which is a damn shame because the game has all the ingredients to be a fun little distraction.

Sure, there’s a single player aspect to it as well, but that isn’t enough to stand up on its own. The combat is fast-paced and enjoyable, but playing on your own without any bots isn’t fun at all. And, sure, there is also local multiplayer, where you can plug in three other controllers and go at each other, but that’s assuming I even have three friends in the first place. Without either of those, I was left in a pickle with no one to play the game with, and half of the game simply made unavailable to me. 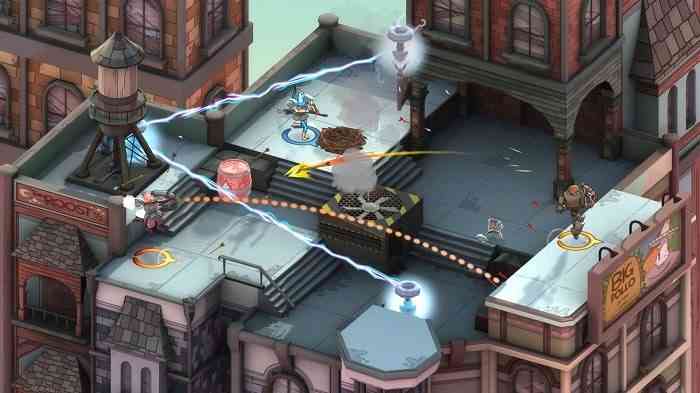 Arrow Heads relying heavily on its multiplayer would be fine if it had a consistent player-base, which, sadly, it does not. This isn’t to say the game wouldn’t be fun to play with friends. The game modes are challenging and the combat is enjoyable when it works, but if you’re the only one of your friends picking it up then you’re going to have a bad time finding someone to play it with, and with a lack of an AI to bolster the single-player there isn’t much of the game to be played. 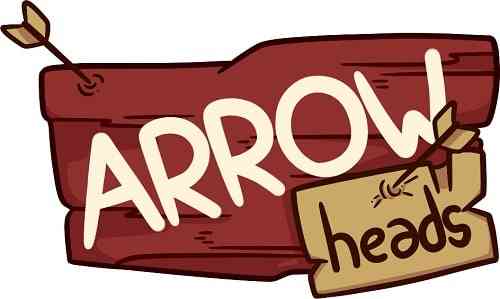