If you’ve been gaming for at least a decade, there’s a good chance you’ve come across the Burnout franchise. The Burnout franchise is a series of over-the-top racing games with a heavy emphasis on crashing. The second Burnout game introduced a special Crash mode which specifically required players to drive into an intersection, cause a crash and rack up as many points (insurance dollars) as possible. This is exactly the same premise as Danger Zone and since the Burnout franchise has disappeared since 2011’s Burnout Crash!, there is definitely a void that needs filling! Is Danger Zone the heir to Burnout’s throne or is this one car-crash that you’ll wish you had airbags for?

Danger Zone’s premise revolves around you driving a driverless car through a pre-created, virtual simulation section, smashing into other vehicles and creating the biggest crash possible. To get you acclimated, you’ll begin Danger Zone with a series of four tutorial stages teaching the various aspects of the game. Aside from driving and steering, there are only two other concepts you’ll need to know; the Smashbreaker and pickups. The pickups are floating tokens throughout each level that will earn you additional money or Smashbreakers. If you collect all the pickups, you’ll get a Grand Slam, earning even more money. Then there are Smashbreakers which are devastating explosions that you can manually cause after a specific number of crashes have occurred in a level. You can earn additional Smashbreakers by collecting the Smashbreaker pickups (most levels have at least two or three). 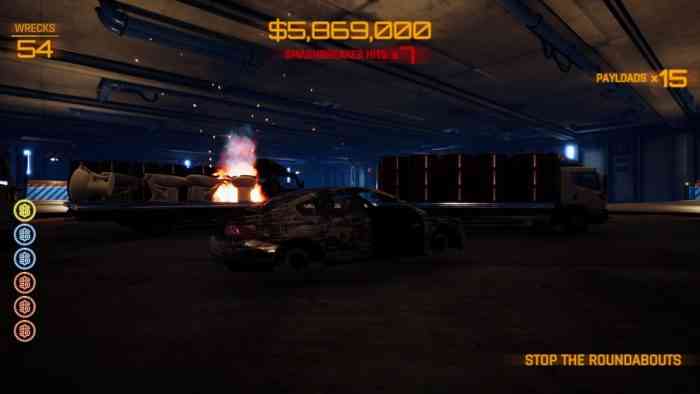 After the tutorials, you’ll play through four “Test Phases”, each consisting of six different “Crash Tests” (read: levels). This translates to 32 different levels to play through. Each level you’ll compete for a medal; bronze, silver, gold, and platinum. The only way to unlock the next level is to earn at least a bronze. The game has a bit of a learning curve, and it would have been nice if I could have tried different levels (at least within that first “Test Phase”) instead of being forced to repeat the same level over and over until I earned at least a bronze. Additionally, the game features a leaderboard that shows the scores closest to yours and I appreciated the fact that it also included a stat showing how many times the other players took to earn their score.

Danger Zone took me just over four hours to complete (with the exception of the “Score 10 Platinum Medals” achievement… still plugging away at that!). The first hour or so, I really did not enjoy the game – in part because of the learning curve. The vehicles don’t handle like they should in a racing game, the steering was really loose and it was way too easy to oversteer. Falling off the track causes “de-resolution” (in other words, disqualification) which resulted in some frustrating moments. It wasn’t uncommon for me to rack up a decent score, only to be bumped off an edge by another vehicle without any possible way of avoiding the hit. My enjoyment of the game ramped up when I started alternating crash attempts with my sons. I also found the last two Test Phases were vastly more enjoyable than the first two Test Phases. Of course, as I continued to play, I also learned a few tricks, such as how to handle the car when using a Smashbreaker and collecting all the pickups in a course to earn higher scores. 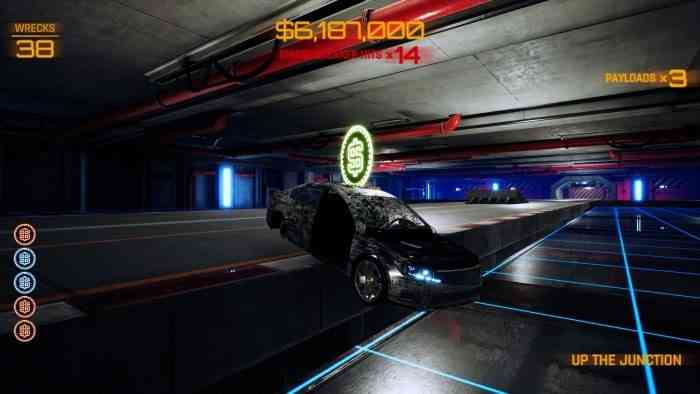 Visually, the game is quite bland. In fact, I popped in Burnout 2: Point of Impact (2002) as a point of reference for the Crash sections, and honestly, there are certain aspects where the 15-year-old game looked better; specifically the environments and the games heads-up-display (HUD). The game’s audio is essentially non-existent. No music at all (not even Kenny Loggins!) and simple sounds like roaring engines, police sirens and explosions make up the remainder of the sounds. The game features no multiplayer at all, and that’s a damn shame – even the ability to have a couple players taking turns (without the need for swapping controllers) would have been a great addition.

Danger Zone takes the formula made famous by Burnout’s “Crash” mode and tries to recreate it, but that’s pretty much all it accomplishes. It really doesn’t do anything better than what Burnout did 15 years ago and in some cases, it fares worse than the older franchise. I really hope the developers intend to offer some post-launch support – the 32 courses probably won’t take most gamers more than a few hours to plow through. If you’re absolutely desperate for a Burnout replacement, then you might get some satisfaction out of Danger Zone.

And since I know you’ve had it stuck in your head since reading the game’s title, here you go… 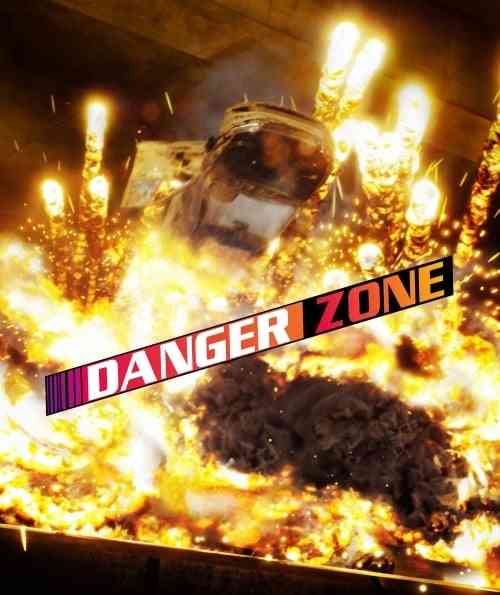 Devolver Digital Valued At $950,000,000 In London Stock Exchange
Next A Hat in Time Review – Stuck in the past, but in All the Right Ways
Previous Arrow Heads Review – Hello, Hello, Hello… Is There Anybody out There?