The President of the United States recently held a press conference at Four Seasons Total Landscaping in Philadelphia and the landscaping business has already been immortalized in VRChat. Led by YouTuber and virtual reality enthusiast CooperTom, who re-created the bizarre Trump press conference setting, furries have swarmed the VRChat version of Four Seasons Total Landscaping to meet up and hangout. VRChat is available right now for Oculus devices and PC. 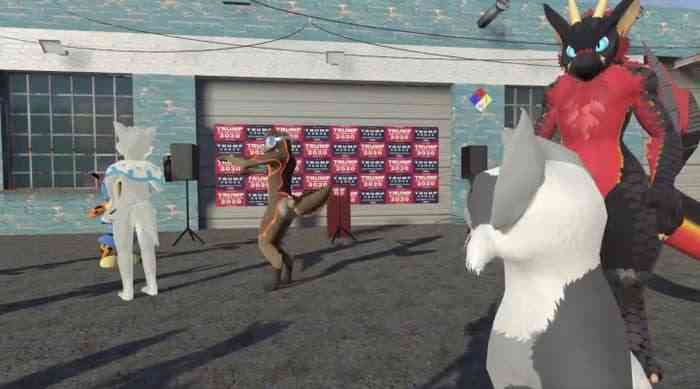 VRChat was created with the intent that gamers would create and share their own social virtual worlds, and CooperTom has taken trolling to a new level with the creation of his Four Seasons Total Landscaping setting. Since release, he has edited the Trump press conference signs to read “Dump” instead of “Trump.” The landscaping business apparently took CooperTom around five hours to create in VRChat, and it has significant attention to detail. While furries were among the first people to congratulate CooperTom for his flawless emulation of this press conference disaster, but many others have reached out to him since.

Most of us didn’t need to know that the Four Seasons Total Landscaping in Philadelphia was located between an adult bookstore and a crematorium before Donald Trump held a press conference there, but CooperTom has done a great job of encapsulating the look and feel of the Philly business. “Man, I can’t believe the Four Seasons VRChat world went crazy like this!” said CooperTom on his official Twitter account. “Hey, I’m out of work! I can make crazy stuff like this for you. I also specialize SOX compliance/reporting and SolarWinds monitoring. I NEED A JOB!”

Are you impressed at the levels of trolling from CooperTom and the furry community in VRChat? Let us know in the comments below!


Doom Eternal May Be Getting More DLC Next Week

Gamers Still Like the Design of the Original Xbox