Young Horses joined several other developers during the recent PS5 games showcase to unveil their next-gen title, Bugsnax. Bugsnax is a first-person adventure game centered around wild creatures who are also some sort of food. The Bugsnax creatures inhabit the land of Snaktooth can form together to create bigger food monstrosities or can turn part of you into some sort of food item. Elizabert Megafig is a helpful tour guide who invites the main character to explore the island and catch Bugsnaxs along the way. Bugsnax will release for the PS4 and PS5 this holiday season, officially announced as part of the PS5 launch lineup. 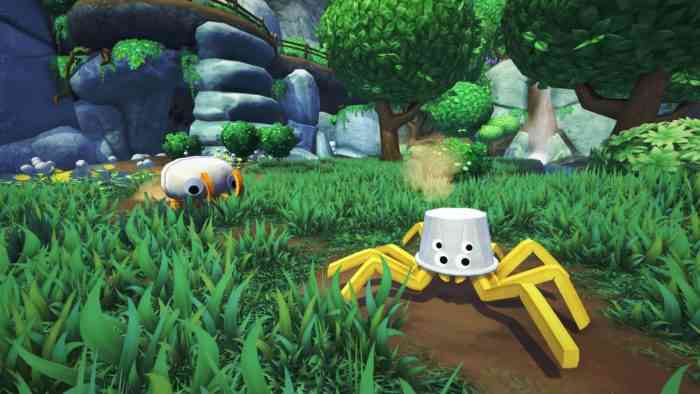 “We just love making weird stuff. It’s been tough staying silent all these years, and it brings us joy and relief (and dread) to finally show off Bugsnax,” said Creative Director of Bugsnax, Kevin Zuhn. “It’s so much bigger and weirder than we ever could have imagined when we started. It surprises and delights us constantly and we hope it has the same effect on all of you.” While we liked the hilarity that ensued during Octodad, Bugsnax looks to be delving into monster collecting and exploration while also including the wackiness familiar to Young Horses.

“We’ve also been hard at work integrating the features of PS5,” said President and Co-Founder of Young Horses, Phil Tibitoski. “I’ve personally been super excited to see the dynamic feedback of the DualSense controller bring life to our world! Feeling vibrations change with the terrain underfoot, the triggers tensing as I snap a trap shut on a Bugsnak and then hearing its cute little chirp through the controller speakers right next to my face, it’s honestly so cool.”

Will you be trying the PlayStation exclusive Bugsnax this holiday season? Let us know in the comments below!