Respawn Entertainment has officially unveiled the upcoming changes coming to Apex Legends, including gameplay changes and what Apex gamers can expect from the new map. The key focus of the map in the trailer is a new coastline, with the gameplay centering on newly added quests which brings players and foes alike together to complete tasks akin to the most seasoned MMO’s. The trailer centers around the new hero which has already been unveiled by Respawn, Loba Andrade, as she narrates the upcoming changes. Apex Legends is available on PS4, Xbox One and PC, with Season 5 coming on April 12th. 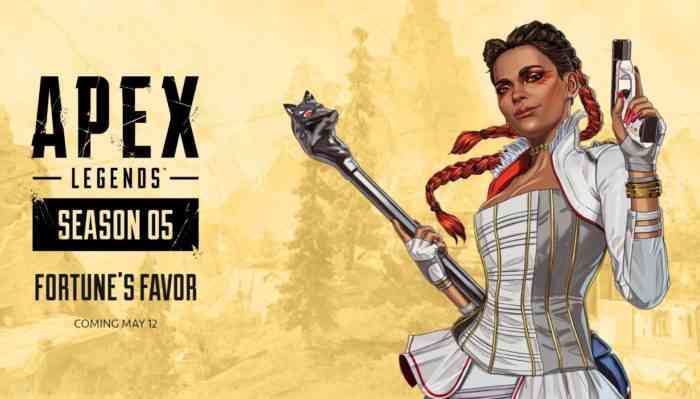 Skulltown and Thunderdome have been removed from Kings Canyon to make way for an enlarged bay with a new area called Salvage. The questing brought to Apex Legends is in the form of Season Quest which involves looting Treasure Boxes and battling Prowlers while extracting. This will bring people together to create battles over the Treasure Boxes as multiple squads hunt down the same loot in Season 5. With the new season on its way, a new Battle Pass brings three new Rare skins for Legends and a Legendary Hemlock skin.

Loba Andrade’s abilities were highlighted in the Season 5 gameplay trailer, focusing on her powerful staff and discs she can throw to teleport to safety. This focus on mobility makes her an easy secondary character for Octane and Pathfinder fans alike. The trailer included a rather cringy cover of Duran Duran’s “Hungry Like the Wolf,” which you can see below. We’re looking forward to seeing all of the new changes and fresh content added to Apex Legends with Season 5 but adding questing seems like a step in the wrong direction.

Which of Season 5’s big changes are you most interested in? Let us know in the comments below!