According to Ninja Theory, the first post-launch character will be added to Bleeding Edge next week. Mekko the Dolphin will act as a tank in the 4v4 shooter, absorbing damage with an ability called Lifeline and damaging enemies with a sonar gun. The Dolphin is contained in a fishbowl where it controls a crab mech that swiftly navigates the battlefield like a dolphin navigates our real life oceans. Bleeding Edge is available now on Xbox One and PC, with the title being part of the extensive Game Pass lineup. 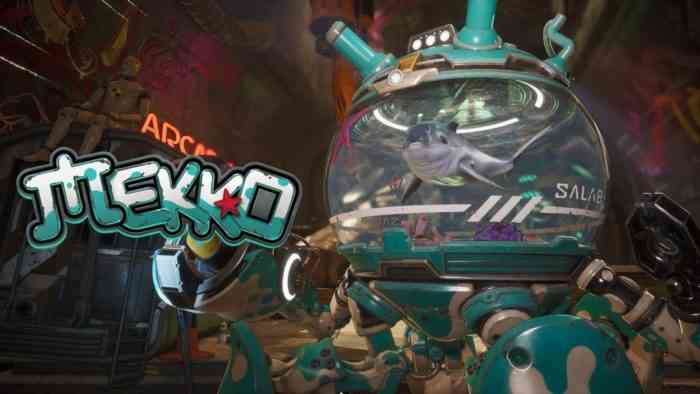 Mekko the Dolphin has numerous abilities that help it control the battlefield, with a charge that pushes back enemies and lifeline tethering them to a nearby teammate. The sonar gun is Mekko’s primary damage dealing ability, while it can shield the mech with a bubble shield which will absorb incoming damage. These tanking abilities will help Bleeding Edge fans take damage for their friends while controlling the battlefield as a mech controlling dolphin. With a roster full of zany characters, Mekko the Dolphin may be the wackiest fighter in Bleeding Edge as of next week. Are you curious what we thought about Bleeding Edge? Check out our review here!

Safety Zone is a Mekko ability that will provide health and armor to injured allies nearby and with Lifeline, Mekko can reel in nearby allies who haven’t located the Safety Zone yet. Mekko has two Super Abilities: Sonic Barrage and Exclusion Bubble. Exclusion Bubble will be able to remove one enemy from the picture entirely, being encapsulated in a floating bubble that floats over the battlefield. Sonic Barrage, on the other hand, is a knockback that will eliminate enemies when combined with stage hazards.

Fans of other Bleeding Edge characters still have the Techno Viking board and a new emote available to all characters to look forward to next week.

Will you be playing as Mekko the Dolphin next week in Bleeding Edge? Let us know in the comments below!