A modder has officially brought Baby Yoda to Star Wars Battlefront 2, replacing the whimsical BB-8 droid with the real star of The Mandalorian. When he’s moving around the battlefield, Baby Yoda fits right in and the mod brings new UI and SFX to the small critter. There’s an additional mod that will replace the BB-8 Star Cards with Baby Yoda themed ones, making both mods an essential combo. Although gamers on the PS4 and Xbox One won’t be able to implement these Baby Yoda mods, PC players can download the mods and join the baby alien on the Battlefront 2 battlefield now. 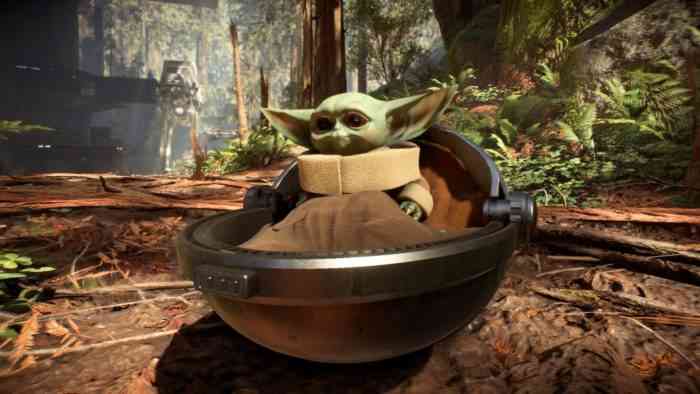 “I started this as a joke mod but it ended up being pretty cool. He looks wacky on the frontend,” said the creator of the Baby Yoda in a Nexus Mods post. “There is nothing I can do about this. I can’t change the animations to make BB8’s arm or wire go away. Everything is fine in-game though.” Although the Baby Yoda doesn’t look so good when it’s stationary, apparently when it’s in action with the Baby Yoda Starcards mod, it really comes to life. This is a fitting addition to Star Wars Battlefront 2 with the Ewoks recently joining the roster as well.

The Baby Yoda mod replaces BB8 with the new character introduced in The Mandalorian, the Disney+ original Star Wars TV series. While the character hasn’t officially been revealed to be a younger version of Yoda from the Star Wars film saga, fans of the series have dubbed the child as such until it’s given an official name. The ISB Agent is another recent addition to Battlefront 2 and he’s the Empire’s first dual-wielding character as part of the New Age of Rebellion expansion.

What’s your favorite episode of The Mandalorian? Do you have any Baby Yoda merch? Let us know in the comments below!