The SMACH Z is a Customizable, Portable PC

The SMACH Z unit is being shown off at Gamescom and it features an embedded AMD Ryzen V1807B SoC which combines with the Radeon Vega 11 to produce AAA quality visuals on the handheld device. The SMACH Z is customizable from the input buttons to the internal specs and the colour of the unit itself. SMACH Z was crowdfunded on Kickstarter and IndieGoGo three years ago and is expected to release soon. The unit is priced between $999 to $1799 depending on how much RAM and storage space gamers want. 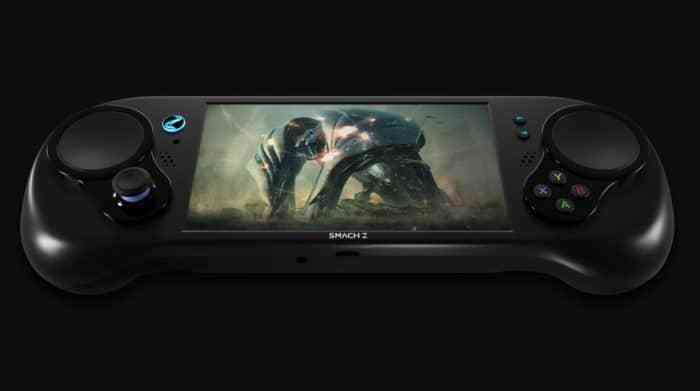 Gamers who purchase the SMACH Z can expect up to 32GB of RAM and a 480GB SSD which will contribute to the processing speed of the unit itself and can change the button layout of the unit. The portable device comes in five colours as of now: Radioactive Green, Indigo, Pearl White, Fire Red or Deep Black. Gamers will be able to access their Steam library as well as Origin, GOG, etc. which gives anyone who spent during a Steam Summer Sale or GOG Black Friday sale access to a number of games immediately on release.

The battery of the SMACH Z lasts between two and five hours depending on what it’s playing and has a 45 minute charge time. The portable device runs like a PC, allowing users to install Windows or Linux and is capable of streaming video, making video calls, surfing the web and any other function you’d expect from a PC. Gamers can connect the portable device to a screen, keyboard and mouse which would make it one of the smallest towers on the market.

Are you a fan of portable gaming that’s intrigued by the SMACH Z? Is this a purchase you’ll consider in the future? Let us know in the comments below!