New mobile racing game, Hot Wheels Infinite Loop was unveiled and released during Gamescom and it’s the first title published by Mattel themselves. This mobile racing game is free-to-play and is already available on the App Store and Google Play Store for gamers to compete for upgrades in real-time against other people from around the world online. 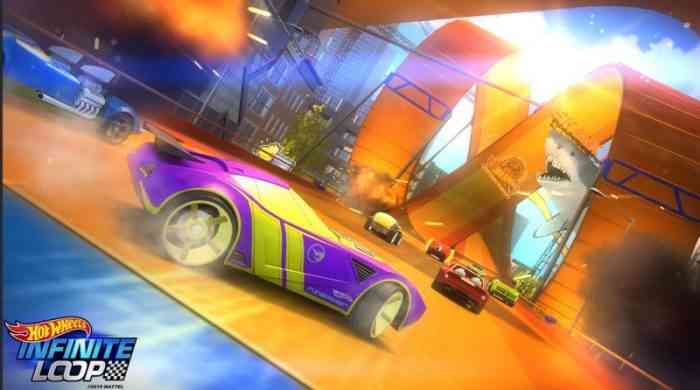 Many of the classic Hot Wheels cars are re-imagined in Infinite Loop, such as Rodger Dodger, Bone Shaker and Shark Bite, which will give long-time Hot Wheels fans something to look forward to. The collecting aspect of Hot Wheels has always been integral to the brand and Mattel maintains that theme in this game, allowing gamers to collect their favorite Hot Wheels, both new and old. Infinite Loop takes place in the year 2068 when stunting, smashing, crashing and doing tricks is encouraged while racers compete in the ultimate racing league. The crashing and smashing aspects make us curious what similarities Infinite Loop shares with Burnout as races are also considered battles.

Tournaments will provide more rewards and prizes in Infinite Loop and gamers will have to avoid traps and obstacles familiar to the Hot Wheels franchise such as the giant shark from Hot Wheels Shark Attack. Mattel mentions gamers will be able to race in New York and London, among other familiar locales in this mobile racer. Apparently Hot Wheels Infinite Loop will also offer a subscription service but the details of it aren’t elaborated upon. Likely this will include a season pass or a similar reward system. Each legendary Hot Wheels car will feature skins to unlock while gamers level up by acquiring rare cars.

What are some of your favorite Hot Wheels cars? Are you excited to try Mattel’s first mobile game? Let us know in the comments below!


What Exactly Can You Personalize in Hot Wheels Unleashed?