Mario Kart 8 Gets Free Breath of the Wild Update

Nintendo has announced that a free content update has come to Mario Kart 8 Deluxe adding a new version of Link from Breath of the Wild and his badass motorcycle from the Champion’s Ballad DLC.

The update is available now and introduces Champion’s Tunic Link, along with the Master Cycle Zero and its Ancient Tires and Paraglider parts. 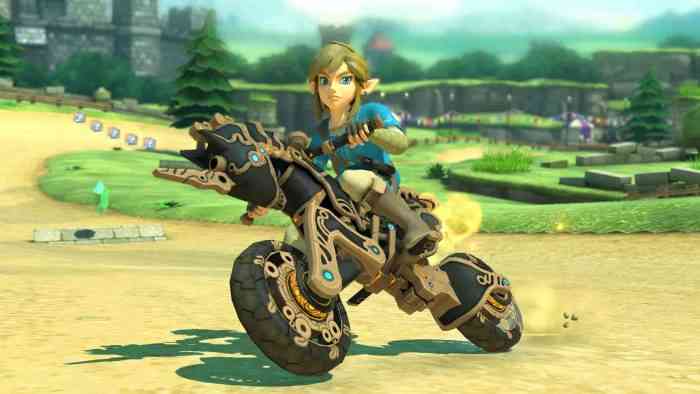 This comes hot on the heels of Nintendo’s Head of Software Development Shinya Takahashi making a statement on Twitter that the game would see further updates. Plural, so there’s sure to be more in the works for the Switch’s second-best selling title. Perhaps Star Fox? F-Zero? Wii Fit Trainer?

That’s really all there is to report on the subject, but Nintendo has also just announced a series of Mario Kart-themed Hot Wheels at SDCC, which is cool. Nintendo’s also working on bringing the franchise to mobile, and Zelda fans have put together a real Breath of the Wild cookbook.

Mario Kart 8 Deluxe and Breath of the Wild are both currently available for Nintendo Switch.

Be sure to check out our reviews of Mario Kart 8 Deluxe and Breath of the Wild: Champion’s Ballad, and let us know what you think of Link’s second coming in the comments below.

Nintendo Isn’t Listening to Their Fans and It Shows
Next
Sakurai Worried He’s Ruined All Future Smash Bros. Installments
Previous
Blizzard Apologizes for Messing Up World of Warcraft with Patch 8.0