Just after Marvel Ultimate Alliance 3: The Black Order was released, at San Diego Comic Con, the first bits of DLC were announced. The first pack includes X-Men’s Cyclops and Colossus. These two heroes in their 90s costumes are free and will be available for download on August 30th. The second pack, which will be the first round of paid Marvel Ultimate Alliance 3 DLC, will be titled Curse of the Vampire. The Curse of the Vampire pack had no official release date at the time, but now we know when it is coming. 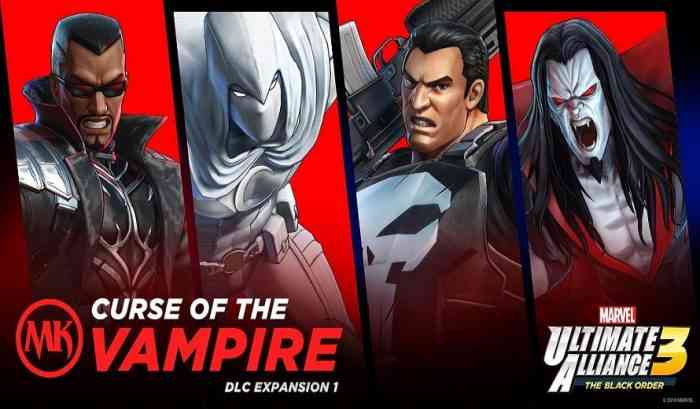 The characters known as the Marvel Knights included in the Curse of the Vampire are comprised of Blade, Moon Knight, Punisher, and Morbius. When announced at San Diego Comic Con, not much was revealed other than the characters in this pack. Now, we are learning that new missions in a new mode will be part of the DLC. A Gauntlet Mode will be introduced that can be played in a co-op group. It is unclear if it can be done solo, but the missions included are described as “intense”.

DLC Pack 1 of the @MARVEL ULTIMATE ALLIANCE 3: The Black Order Expansion Pass launches 09/30, as the Marvel Knights join the alliance! You can also take on an intense series of co-op missions in the new Gauntlet Mode! #MUA3

The Curse of the Vampire DLC pack is going to be available for owners of the Expansion Pass on September 30th. Remember, this and the free Colossus/Cyclops DLC packs are just the first. There will be at least a couple of more DLC packs for The Black Order.

Which of the Marvel Knights is your favourite? Let us know in the comments below.

Marvel’s Avengers: Infiltrating an AIM Base in Warzone Gameplay Video

Ninjala 2.0 Update Fixes All of Ninjala
Next
DayZ Unbanned in Australia After Removing Cannabis from Files
Previous
Hot Wheels Infinite Loop Speeds onto iOS and Android