The X-Files – “My Struggle” Recap

After a 14 year hiatus, The X-Files is back on the small screen. While it’s true that the original series limped over the finish line, fans have steadfastly declared that the truth is still out there. Now, we have the opportunity to see if that’s true. With Gillian Anderson, David Duchovny, and the spectacularly grumpy Mitch Pileggi on board, let’s dive into the miniseries premiere “My Struggle.” Remember, trust no one.

The episode opens with an absolute crash course in X-Files lore. Fox Mulder pontificates while images drawn from he and Scully’s adventures litter a table. For those unfamiliar with the series and its lore, most of the opening scene will sail in one ear and out the other. For me, a certifiable X-Files nut, it was a perfect appetizer to get me prepared for the rest of the episode.

Fortunately, My Struggle draws heavily on (probably) the most famous UFO related event in history – Roswell. The conspiracy story that seemed to be largely solved gets twisted in the clever fashion The X-Files was so well known for. What do we know? The answer is everything, but also nothing. It’s a nice set up for the rest of the series, making a great deal of room for maneuvering in an already jam packed mythology. 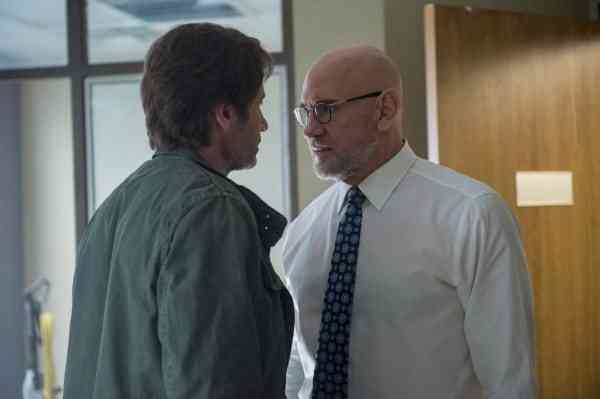 Flashing forward to the present day, we see that Scully and Mulder have been torn apart – Scully uses medicine as her crutch, while Mulder still firmly clings to his want (need?) to believe in what he’s been working toward. They’re soon brought back together thanks to guest star Joel McHale, who does a nice job as the conspiracy uncovering Ted O’Malley. Ted has made a mint being a right wing alarmist (publicly), but is a true blue believer on the level of Mulder behind the scenes.

Ted introduces us to Sveta (Annet Mahendru), who claims to have an abduction history very similar to Scully’s and may also have Alien DNA.

Scully is predictably dismissive while Mulder becomes certain that Sveta is the key to solving the mystery of Alien involvement on Earth. The remainder of the episode treads familiar X-Files ground with Mulder chasing down leads and coming to grand realizations and Scully trying to ignore her experiences and her cosmic attraction to Mulder. The best news of all is that the chemistry that made the original series so special is still undeniably present in My Struggle. Some of the interactions were stiff (as one might expect after 14 years – I discount the 2008 film which didn’t do much to capture the X-Files feel) but that magical chemistry shone through by and large. 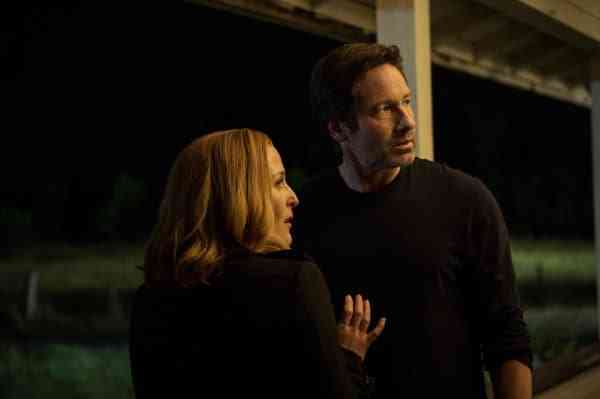 So Mulder hangs out with Ted and gets a real taste of Alien technology in the form of a reproduction craft – reverse engineered from crashed Alien tech. It runs on ‘zero point’ energy and element 115, a nice nod to the real world of intelligence industry ‘whistleblowers’ who claim to have experienced basically everything the Alien craft scientists speak about.

All this tangible evidence gets Mulder excited, the character’s undeniable charisma starts to really shine, and suddenly it feels like we never left his side. He meets with the ‘Old Man’ who has previously promised to tell him the truth about Roswell if he assembles the puzzle correctly, and is told he’s close to the answer. What else is there to do but share the theory with his ex-partner?

In Mulder’s theory, Aliens were drawn to Earth by nuclear weapons. The crashed Roswell craft was captured by the societal elite, who have worked feverishly to obscure that technology in favour of money making schemes, and to carefully erode public freedoms. The goal? An elite only society not unlike that seen in Elysium. Scully goes berserk, calls everyone crazy, and reveals that Sveta’s DNA is NOT Alien. 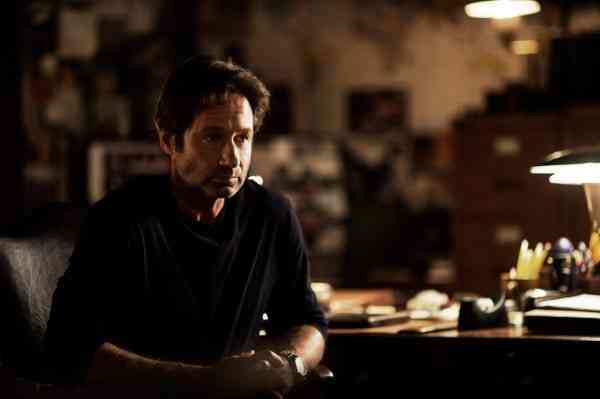 The episode does an admirable job of walking that line of uncertainty – is Sveta the real deal? We get our answer at the episodes climax – Scully’s rerun tests reveal that Sveta DOES have Alien DNA, as does Scully herself. Unfortunately, it’s too late. The Alien reproduction craft is destroyed, the government permanently unplugs O’Malley, and somebody blows up Sveta’s car. The path is uphill from here, but it’s all ok as Walter Skinner reopens The X-Files. It’s a bold move to so severely alter the mythology of series in a single episode, but I like the confidence Chris Carter wrote this episode with.

I sincerely hoped this series would incorporate some of what made the original so unique – fantastic self-awareness and the willingness to poke fun at itself. I’d wager we’re on our way to at least a couple monster-of-the-week episodes (score!). In all, My Struggle struggled a little in places, but made me smile in all the right ways. Oh, and the exact same opening sequence as the original? Amazing!

Paul will recap each week’s episode of The X-Files – so stay tuned right here for more. Be sure to also check out our recent recaps of Arrow, Legends of Tomorrow, and The Flash!

A Fallout TV Series Has Been Confirmed and is Now Under Production
Next
Pokémon Debuts Its First-Ever Super Bowl TV Commercial
Previous
Surreal Adventure ‘Between Me and the Night’ Gets Full Release Feb. 22