Oliver is also back from his winter break and he’s dealing with the fallout from Dahrk’s last attack. But just how far will Oliver go in his hunt for Dahrk? Let’s take a look at Arrow – “Blood Debts”.

We open in the cemetery 4 months from now, the same scene that ended the first episode with Oliver swearing to end things and kill ‘him’. So, let’s just get this out of the way. Oliver has killed literally hundreds of people at this point, so forgive me for not being blown away by him promising to end someone’s life. Additionally, if this cemetery scene is 4 months from now, doesn’t that guarantee that Felicity lives through this shooting? In less than 30 seconds, they’ve already pulled all the suspense out of the episode.

Anyway, now we’re back to the present and Felicity is being rushed to the hospital which is intercut with Oliver beating the bejesus out of several Ghosts (AND KILLS ONE) as he looks for Dahrk. Since the Ghosts are committing suicide instead of talking, Oliver decides that Andy is their only hope of finding Dahrk. Felicity wakes up after surgery and everyone is there to see her except for Oliver. Diggle decides to go with Oliver’s gut and talk to Andy again but does most of the talking with his fists. Oliver reaches out to Lance in a last ditch effort to find Dahrk, an action that would expose that Lance has been working both sides. Oliver goes to the building Lance met Dahrk in but instead of finding him, finds a bunch of dead Ghosts as well as an anarchy symbol painted in blood on the wall.

The symbol is the calling card of one Lonnie Machin, whom everyone may remember from earlier this season when Thea set him on fire. They do a team break as everyone focuses in on finding Machin. Diggle returns home and Lylah lectures him on the way he’s been treating his brother and how he’s changed towards his brother. Thea confides in Laurel about what happened to her with Dahrk, because confiding in Laurel has never come back to haunt anyone in this show. No. Not at all. Laurel walks in on her father embracing Felicity’s mom and they quickly move past it, but let’s be serious, this will become a burning issue sooner rather than later. She talks to Lance about him blowing his cover but they get some dark news. The blood Machin drew his symbols in was actually the blood of his foster parents, not the Ghosts. 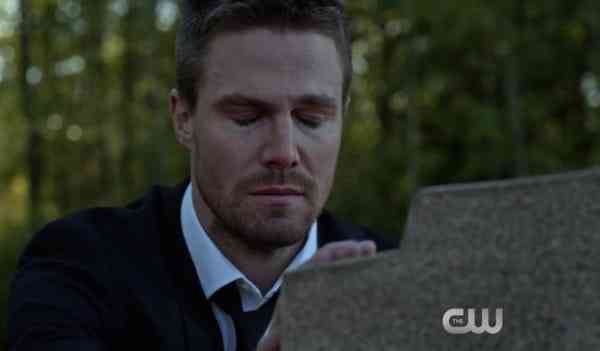 The team tracks Machin to Dahrk’s now vacant home (not sure when that happened…) and they find the house totalled. Of course, it’s a trap and only Thea can get away to chase Machin down and gets ambushed by him. Luckily the team manages to come and save Thea in the nick of time, though she didn’t really appear to be in any real danger. Oliver interrogates Machin in a very similar fashion to Diggle with his brother but is interrupted by news that Felicity’s surgery didn’t go well. Diggle goes back to Andy and takes Lyla’s advice and reaches out to him as a brother, not as a prisoner and it gets through to him. Thea is left with Machin, cause that makes sense. She almost gives into her blood lust but leaves Machin alive as the police show up. At the hospital, Oliver is hit with the news that Felicity’s injuries are permanent and she’ll never walk again. It was only a matter of time before they took the final step and completely turned her into Oracle…

Oliver realizes that Laurel is the one who brought Machin in and goes to intercept the police transporting him, breaks him out and tells him to make sure Dahrk is dead. Oliver confronts Laurel who always seems to take a ‘holier than thou’ attitude despite being such a terrible friend and all around awful human being. Cue Diggle showing up and giving the obligatory speech that will keep Oliver from killing someone later in the episode. Thea goes to Alex and breaks up with him (cause that’s still a storyline, I guess) but they leave the door open for the future. They lose the tracker on Machin and the team demands Oliver go see Felicity. Felicity is in surprisingly good spirits and, as usual, is Oliver’s rock and gives him the inspirational ‘you’re a hero’ speech. The team tracks Machin down and they roll out for the big showdown.

Machin has Dahrk’s family held hostage and is about to torture them with a blowtorch when the team shows up. Turns out Machin is an amazing combatant and the Arrow’s have their hands full. Thea chases Machin while Oliver finds Dahrk and the two Arrow’s have a choice to make. Of course, neither of them kill anyone, and both make an escape. Machin beats Thea and Dahrk promises to leave the Green Arrow alone so the Arrow can say goodbye to his family before he kills him. As we wrap up, Diggle comes to his brother and they start to play cards again, just like old times. Alex shows up to Thea’s and they decide to keep pursuing their relationship (cause apparently this is still a storyline). Oliver and Felicity have a moment and Felicity let’s Oliver know that she’s still committed to their fight. Dahrk is hiding his family and it turns out that his wife is a much bigger part to play in all this then we thought. 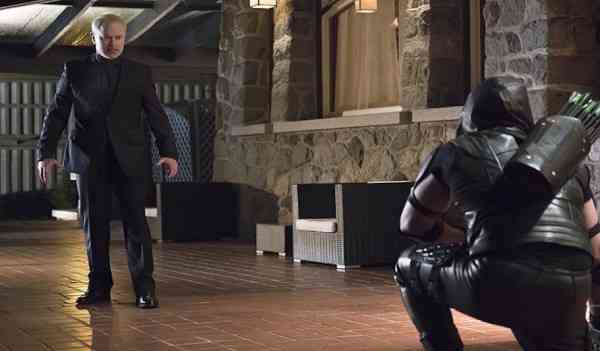 We finish back on the cemetery we started in and Oliver climbs into a limo with Felicity who looks surprisingly spry and she is just as committed to killing whoever it is they’re talking about.

In the flashbacks, the injured Oliver is being taken back to camp by Conklin who is relishing outing Oliver. Conklin gets Reiter’s permission to kill Oliver, but instead he decides to opt for a little payback and flogs Oliver. Luckily for Oliver, the artifact that Constantine left causes the tattoo on his stomach to glow which makes him valuable to Reiter. Oliver manages to get he and Taina’s safety but they are both now prisoners of Reiter’s.

The return was pretty good as the team dealt with a lot of morality issues in the wake of the escalated violence by Dahrk. The call back to the cemetery continues to deepen the mystery as to who they were burying, but my gut still says Thea. I guess we’ll see! As for the second half of the season, without the weight of Legends of Tomorrow on its shoulders, it looks like Arrow may be able to make a comeback and give us a decent season after all. Here’s hoping the trend continues.

The Flash – “Flash Back” Review
Next
UK’s Dare to Be Digital 2016 Game Design Competition Now Open for Registration
Previous
The Top 10 Amazon Gaming Deals This Weekend, Counted Down