Two things are infinite: the universe and the amount of leaked skins Fortnite will have. That’s okay though. The way I see it is if a leak doesn’t spoil a narrative or cinematic surprise, it’ll come out eventually, so who cares? If I see all the characters that will come to Fortnite from now until the end of time today, show them. Today’s biweekly Fortnite leak is the DC comic book hero Green Arrow. Traditionally, he is basically Robin Hood, but this one is modelled after Stephen Amell’s character in the CW series Arrow. 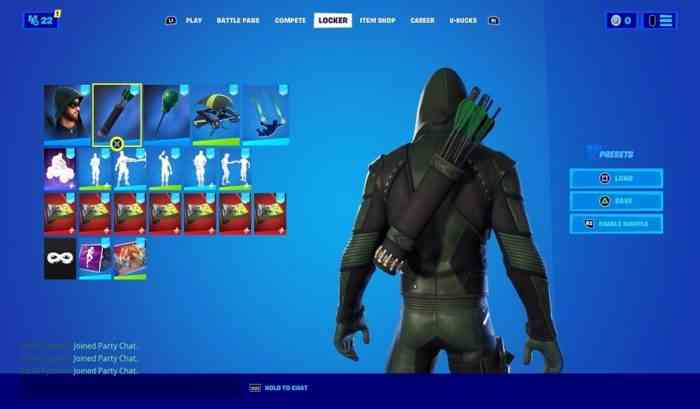 Green Arrow, or as known in the show the Arrow, often wears a bycocket hat with a feather in it like Robin Hood, as well as a green tunic. His look in the CW show is modernized a bit with a hood and an armored, green and black body suit. This is the depiction that Fortnite has chosen for the Green Arrow crossover. This skin was leaked by a few users, who were accidentally granted access to it. And what else to do when you get an unreleased skin, but dance?

The Green Arrow skin also has some accompanying cosmetics, such as a green quiver Back Bling, a staff with a green boxing glove on it (which appears to be the pickaxe), a unique parachute, and green trails for free-falling. There is no telling when Green Arrow will make his official debut in Fortnite, but it cannot be too far off. Operation Snowdown also begins in Fortnite today. Fortnite is available on PC, mobile devices, Nintendo Switch, PS4, Xbox One, PS5, and Xbox Series X.

Are you looking forward to this skin? Let us know in the comments below.