The original Transformers defined an entire generation of cartoon and comic book fans nearly 25 years before Michael Bay’s ‘vision’ for the franchise hit the scene. The G1 Transformers are the definition of super rad giant ninja robots, and now there’s a game to shine the spotlight on those 1984 gems. Platinum Games’ Transformers Devastation is here, and it’s part trip on the wayback machine and part modern brawler combo fest.

Since its inception, Platinum Games has been making the same style of game. Frantically paced, combat heavy, and challenging spectacles that demand creativity and flawless execution to achieve high scores. Crucially though, Platinum titles are all distinct and memorable, despite sharing common themes. Transformers Devastation is no exception to either of those points.

Transformers Devastation’s plot is nothing groundbreaking. Megatron is trying to destroy Earth, and it’s up to Optimus Prime and the Autobots to stop him. This is, of course, the plot of darn near every Transformers property in history, but I was still charmed by it. The voice acting is nostalgia inducing, conjuring memories of several other 80’s cartoons and making me feel generally warm and fuzzy. Peter Cullen in particular is great, and makes every line sound majestic even when it isn’t. This isn’t a particularly long game, but the variety it provides in play style and difficulty make replay value high. So while the storyline won’t blow your hair back – I bet you know exactly what the outcome is right now – fans of the series or old style cartoons will sport giant Cheshire Cat grins from beginning to end.

“Fans of the series or old style cartoons will sport giant Cheshire Cat grins from beginning to end.”

The game progresses more or less linearly, with slight deviation. For the most part you’re funneled down boring hallways with unsatisfying platforming in between battle zones. There are plenty of collectibles and unlockables to be discovered, but here’s an interesting bit: Transformers Devastation is also a loot game. I bet you didn’t see that one coming did you? Hidden chests and caches throughout the game hide weapon drops that get analyzed upon returning to the Ark (the Autobot base). There are a huge variety, from specialty items like Prime’s Axe and Devastator’s Drills to elemental fare like the Hyper Thermal Battle Hammer. From what I can tell, these are randomly generated, and can be combined with other items to imbue stat boosts and attack power increases. It’s a neat system with endless combinations to be had, but I wish the game explained stat upgrades in a more transparent fashion.

You’ll also be gathering currency along the journey that can be used for several things. From purchasing new moves to developing character upgrades, the path is diverse and it was a lot of fun to tune up my Transformers as I saw fit. 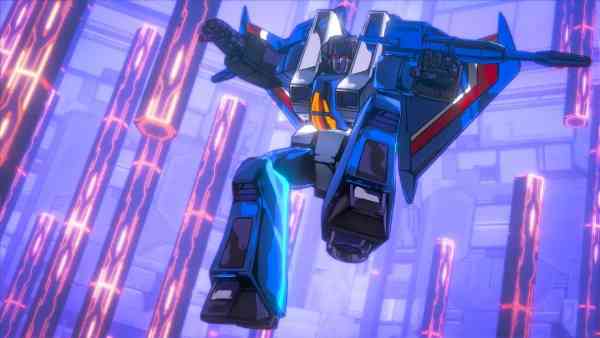 But Transformers Devastation is a Platinum game, and stars giant transforming fighting robots. As such, combat is the focus, and that combat is damn good. Each skirmish requires a carefully and quickly generated plan. Battles happen at breakneck pace, and on higher difficulties a single error can easily end you. There are of course the standard light and heavy attacks you’d expect, along with a long combo list for juggling opponents around, but the real game changer is the transforming. It happens near instantly (complete with the badass original sound effect), and provides a whole new dimension to combat. It’s easy to quickly transform to avoid a flurry of attacks, as vehicle forms hit top speed near immediately. Each character also has a vehicle attack that can be unleashed after a staggering combo lands, and can be chained together with other attacks several times to really wear down tougher enemies.

There are also ranged attacks, but this is a definite weak point. The reticule controls feel both squirrelly and sluggish, and trying to line up shots as Cybertronians dart around is challenging at best. I tended to stick to up close battling unless I could hide behind some cover and take chicken shots at enemies perched out of reach. My other serious problem with Transformers Devastation is the camera. For a game that requires situational awareness, the camera is a liability. Locking on is not an option in Devastation, and it can be incredibly frustrating. Against Jet based enemies (read: MOST of the Decepticons) it is near impossible to keep track of where your target is, and many fights consisted of me wheeling the camera around endlessly like a carnival ride while trying to squeeze off a few attacks. With the attacks mapped to face buttons and the camera to the right stick (the way it should be) you can’t do both at once, so a little more camera AI or a lock on option would be like a gift from above. 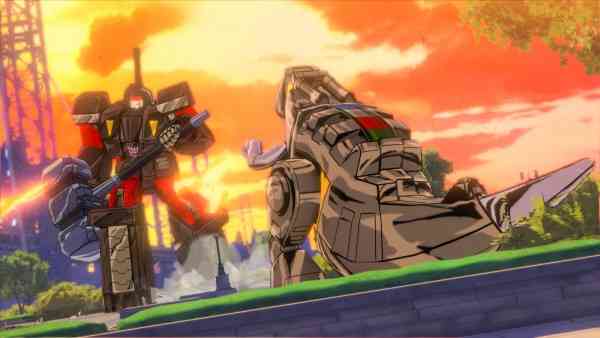 Visually, Transformers Devastation is marvelous. It’s smooth as butter and gorgeously animated in the G1 Transformers style, and the amount of on screen action is impressive. At times, that level of on screen crazy gets out of hand though, as one particular scene had me feeling rather motion sick. Fortunately, everything else looks so slick I can give it a pass for a few minor missteps. The transformations in particular look great – I found myself doing it for no other reason that it looks cool.

Transformers Devastation is a great action game marred by a few design hiccups. Camera issues can make combat a chore, but that combat is extremely satisfying at its core. Fans of cartoons, action games, comics, Transformers, and fun will likely have a good time with Platinum’s latest. Is it the best they’ve done? No. Is it still a good time? Heck yes. 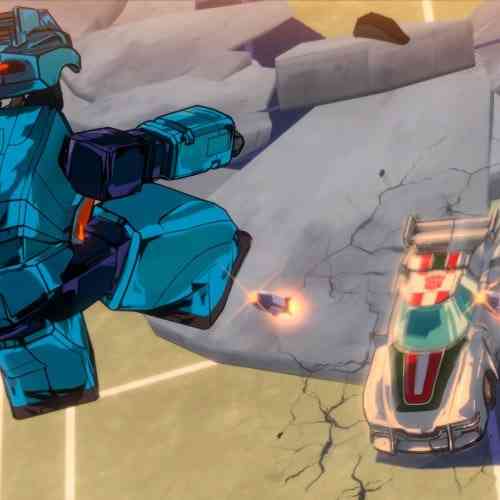 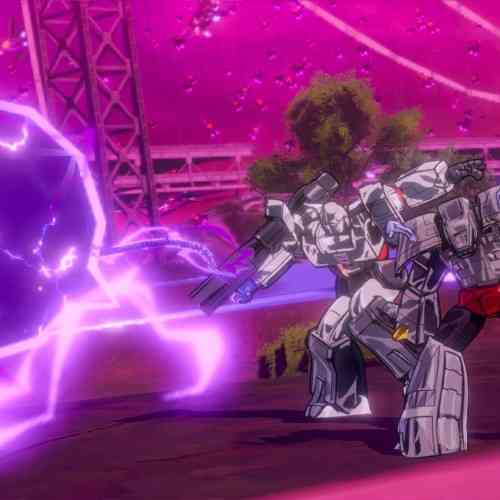 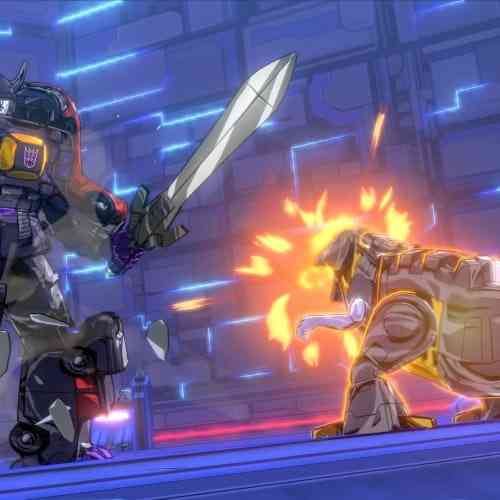 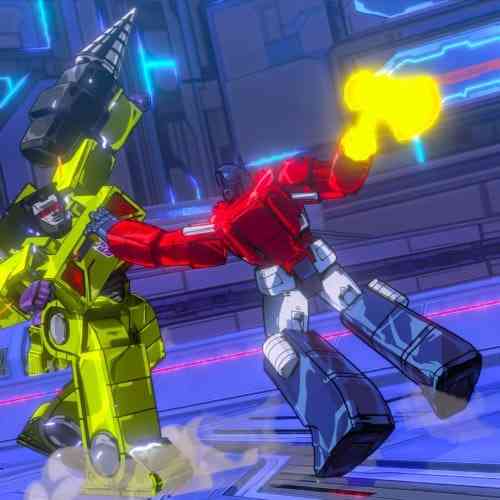 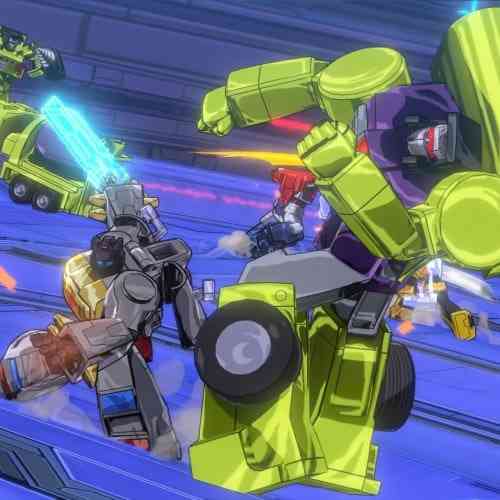 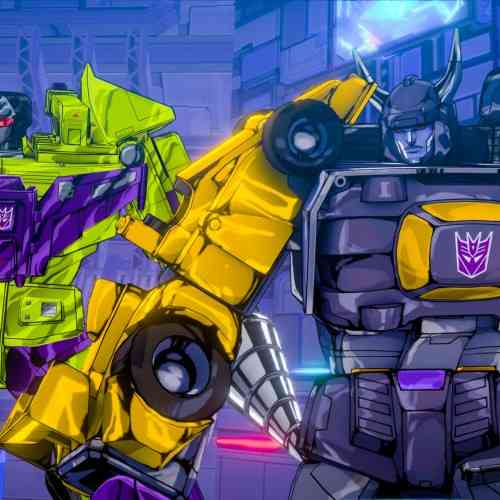 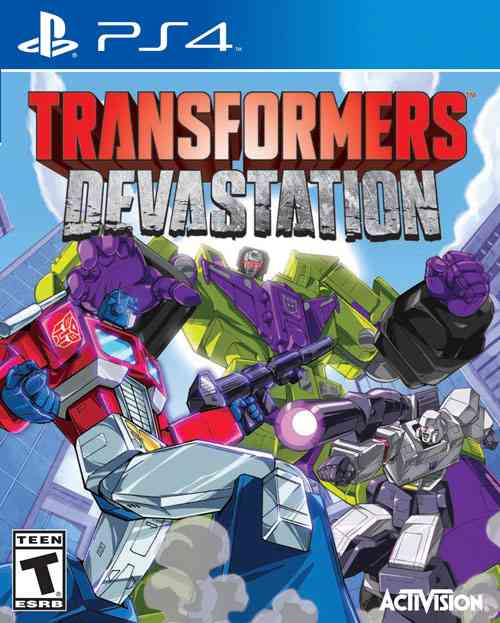 PlatinumGames Has Many Games to Announce
Next Dragon Quest Heroes: The World Tree’s Woe and the Blight Below Review – A World of Nostalgia
Previous Skyhill Review – Dull & Repetitive Rogue-like Fails To Deliver