Dragon Quest Heroes: The World Tree’s Woe and the Blight Below Review – A World of Nostalgia

Dragon Quest returns in an all-new, and unexpected way, by utilizing the Warriors/Musou beat ‘em up style of gameplay. It’s not the first time Omega Force has mustered up a crossover/spinoff title that utilized the Warriors/Musou formula as we’ve already seen it used in Dynasty Warriors Gundam, One Piece: Pirate Warriors, and Hyrule Warriors. Dragon Quest Heroes: The World Tree’s Woe and the Blight Below (yes, it’s a mouthful, so I will refer to it as just Dragon Quest Heroes from here on out), is the newest iteration for the Dragon Quest franchise while also being a Warriors/Musou franchise, a mash-up I never thought I would experience. Even more unexpected, I never thought I would be explaining and expressing how much this mash-up DOES work, and oh so well.

When you boot up Dragon Quest Heroes and start your adventure, the first thing you’re greeted by is the option to pick which one of the two heroes you want to play as. You have the choice between the female character Aurora, or the male character Luceus. The game assures you that regardless of whom you choose you won’t miss out on anything. You can also rename them if you wish. Soon after you decide the name and character you want, a colourful cut scene ensues introducing the world and story of Dragon Quest Heroes. 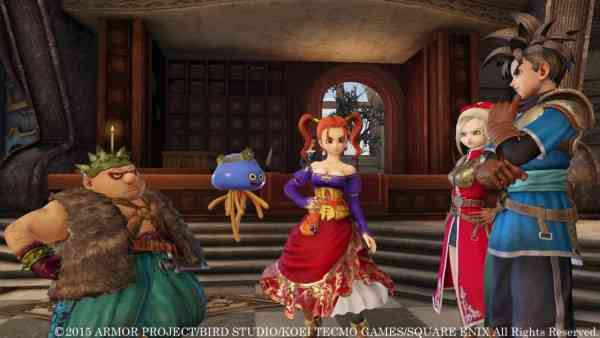 The story starts off with the familiar, and dare I say, loveable monsters from the Dragon Quest franchise living alongside people in harmony; however, that soon ends as a dark shockwave engulfs the land turning the monsters into a frenzied rage as they begin to turn against people. From that point on it’s up to you, the hero, to traverse the world of Dragon Quest Heroes to restore order and peace to the land. Throughout the game you’ll meet familiar faces from past Dragon Quest games and also new ones that all come to your aid and form your party.

Dragon Quest Heroes is brought to life through a combination of CG animation, portraits illustrated by Akira Toriyama, and RPG-like text boxes with scrolling text that all ooze with nostalgic beauty. Beeps and boops ring in your ears when text scrolls on the screen and classic RPG-like music plays when saving your game – old-school RPG feels, it’s marvellous. While the story is far from a masterpiece, it’s a light-hearted and simple concept that welcomes the various features the game has to offer, which is what you should really be more focused on.

Although the core combat is of the Warriors/Musou formula, Dragon Quest Heroes actually spices it up to make it unique and its own. The gameplay has a more strategic approach than other Warriors/Musou games out there as you have an array of spells and abilities to perform that cost mana, and you actually need to dodge while also planning your moves. The only move that doesn’t seem to add anything to the mix is blocking as it’s delayed when executed and just doesn’t better, or even as well, as dodging. Meanwhile, an entirely new, and pretty neat, mechanic is the usage of “Monster Medals” where slayed monsters have a possibility of dropping medals, and once obtained they can be used to summon that very monster to fight by your side on the battlefield. So, you can have a couple of monsters helping you out on one side of the map while you and your companions fight on another side of the map, allowing for a more strategic approach.

“While Dragon Quest Heroes is still a hack and slash game with a gazillion of monsters on the battlefield asking you to hack’em up, it’s a refreshing upgrade from the long-lived base formula.”

As you wipe out more enemies you’ll earn EXP, level up, and have the ability to assign where your skill points go. Since each character has their own fighting style, abilities, as well as strengths and weaknesses, assigning skill points allows for some customization and flexibility as to how you want your team to be. Speaking of team, you can also form your very own party of four, freely taking control and switching between the characters during battles. While Dragon Quest Heroes is still a hack and slash game with a gazillion of monsters on the battlefield asking you to hack’em up, it’s a refreshing upgrade from the long-lived base formula.

While the game only has one mode – that is, the single player main story adventure – it’s within the adventure that there are other things you can do. When you’re not on the battlefield, you’ll be transported to an area that acts as a hub containing all the things that help you pass the time, as well as allowing you to gather some items. For example, you have NPCs that assist you to create, buy, and sell weaponry as well as accessories. The cool thing is, whatever weapon you equip on a character, it will actually change and show in battles. You’re also able to decide who will be in your party when going into battle and who will stay behind.

The most important thing about the hub area though, is the map – that’s where you can see and attempt all the side and main story quests. Unfortunately, the side quests are mostly repetitive and lackluster as they are located in places you’ve already been and related to monsters you’ve already fought a bunch of times. It really is just a process of getting from point A to point B, kill the monster(s), run to the reward chest, open the chest to obtain your reward, and then get transported back to the hub. Although I was let down a bit by this aspect, the most disappointing feature, or lack thereof, is the absence of co-op. It downright begs for it as the game has two main heroes and would just be much more jam-packed and entertaining with the ability to duke it out together with a friend, locally or online. 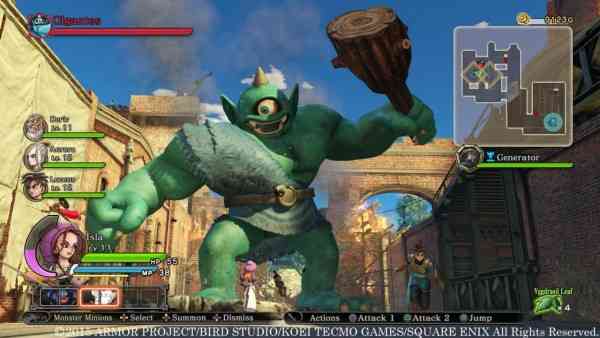 Visually, I can humbly say that I hope the next full-fledged Dragon Quest game looks as beautiful as this one. It’s colourful, detailed, yet lavishes in simplicity to capture the charm of the world of Dragon Quest. Whether it’s making the characters and monsters come to life or the fluidity of actions in battles, the game does it seamlessly. When you look at the original 2D art designs of monsters and characters from past Dragon Quest games and wonder how they would look like today, look to Dragon Quest Heroes – it can show you some of them in gorgeous HD.

In terms of sound, the music isn’t as top-notch as the visuals, but it is still good and does its part to present the entire package. It’s nostalgic, catchy at times, but that is about it; it is not as memorable as other orchestral heavy music I’ve heard in the past. Voice acting, on the other hand, is wonderfully done in both English and Japanese (yes, you have a choice in which you want to hear) as the voices match the on-screen visuals and scenarios quite well.

Dragon Quest Heroes does an exceptional job in displaying how the beat ‘em up Warriors/Musou formula works with the beloved Dragon Quest RPG series. It blends in strategic and RPG elements flawlessly making the game unique and full of nostalgia. The visuals are gorgeous and should easily please fans of the Dragon Quest franchise and newcomers alike. While at times things can feel repetitive, the greatest loss for the game is its absence of cooperative play as it just begs for it. Nevertheless, Dragon Quest Heroes is a solid nostalgic trip and unique hack and slash game that many can unwind over. 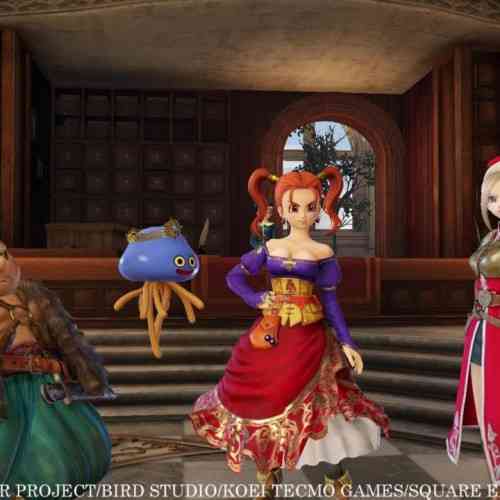 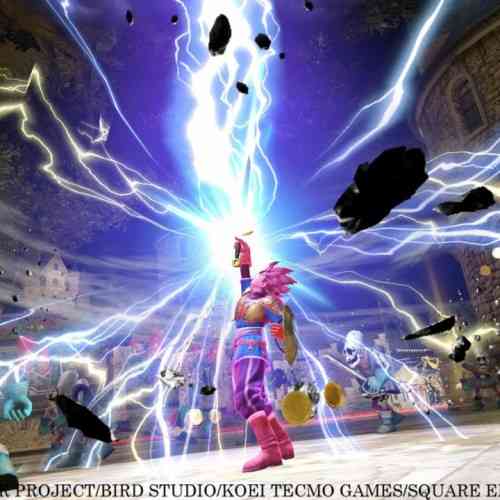 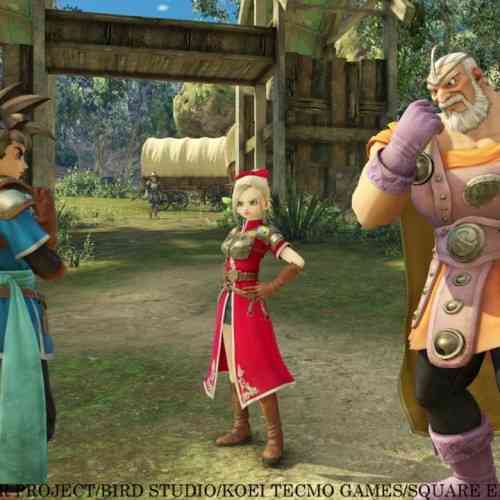 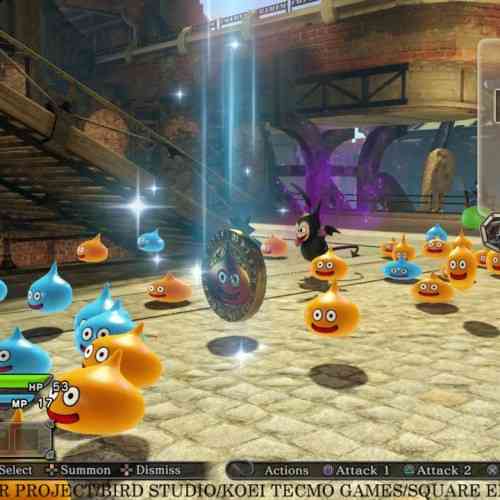 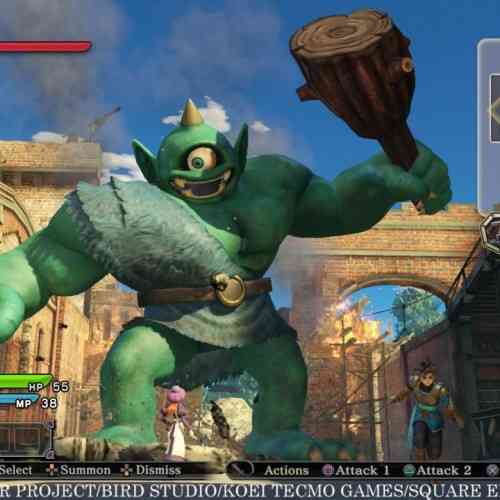 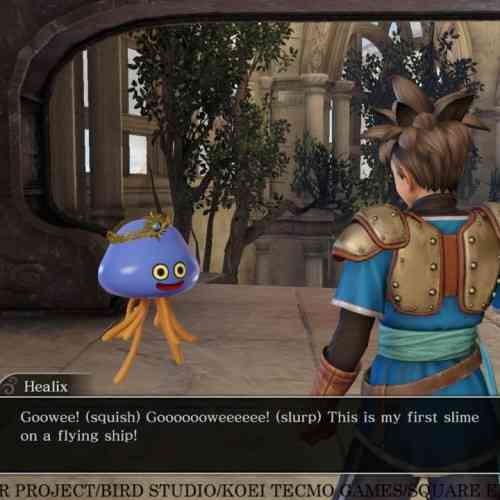 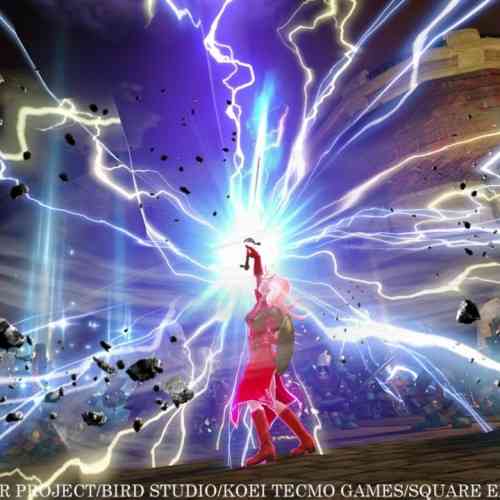 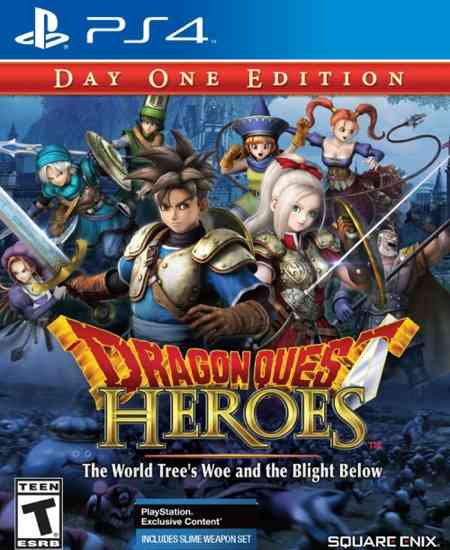