The T248 wheel is set to release this month, and with it, Thrustmaster is hoping to usher in a new era of its budget line of sim racing products. The T150 has performed admirably for the last six years, and to be fair, it still does. The T150 is, after all, routinely recommended by experts as a fantastic launching point for anyone’s sim racing career. Having had some experience with it myself, it’s tough to argue that sentiment.

Though I’m no expert, by any means, I do have a fair bit of time behind sim racing wheels. And I can safely say that after giving the T248 a proper evaluation – putting it through its paces with WRC 10, Gran Turismo Sport, and Assetto Corsa – this is a product that will make anybody that’s intrigued by taking the plunge into sim racing quite happy.

If you haven’t had a chance to do so already, be sure to check out our unboxing of the T248. Strictly from a cosmetic perspective, my initial impressions of the unit were positive. I appreciate the modern look of the wheel, finding it bears a resemblance to the likes of newer Audi or Mercedes models. The buttons are all spaced out in easy-to-reach spots, and though they don’t quite have the tactile feel that I was hoping they would have when pressed in, nothing feels cheap.

Aiming For The Podium

I’m not sure if the same can be said for the rim, however. While it’s a soft leather that lines the outside of the wheel, the inside was left exposed. This hard plastic hasn’t been ideal for endurance races, so be sure to bring a set of gloves. But, even with a solid pair of mitts handy to amend the issue (and given the T248’s price point), knowing Thrustmaster skimped on wrapping to save a few bucks is a tough pill to swallow.

Conversely, the LED race dashboard implemented into the center of the wheel adds a decidedly premium feel to the product. Sure, it’s a basic blue and white display that leaves nothing to the imagination, but its usefulness can’t be understated. Making use of the two dual-position encoder switches, you’ll have a plethora of options at your fingertips for when you need to adjust on the fly. Want your lap times or fuel level displayed? No problem. Need to change the amount of force feedback mid-lap? You’ve got the green light to do so.

Another area in which the T248 excels is the paddle shifters. I was immediately impressed by the snappy, responsive feedback they gave. And I appreciate that they’re slightly curved on the backside, giving my fingers a perfect cradle to rest in comfortably. Additionally important, the shifters require a decent amount of force to activate, eliminating the problem of miss-shifting that so many cheaper wheelsets suffer from. Front to back, this is a well-built product and one I expect to last through years of usage.

But, it isn’t 1999, anymore. All the bells and whistles won’t mean much if the T248 can’t deliver intuitive force feedback. It’s essential if you want to compete on the track these days.

Tinkering Under the Hood

Thankfully, Thrustmaster mostly nailed the execution of their hybrid belt and gear-driven wheel. Both under and oversteer are conveyed accurately, giving the user plenty of time to make adjustments and straighten out. Plus, there’s an impressive amount of torque under the hood that’ll take you by surprise if you’re not ready for it. In fact, with settings kicked up to the maximum, there were a few crashes in Assetto Corsa that genuinely made me question if the wheel would hold up. But, alas, she’s still going strong.

Speaking of going strong, the T3PM pedal set that’s included in the bundle has been an, admittedly, unexpected joy to use. Though they don’t provide the same sort of accuracy and consistency that a solid pair of loadcell pedals will provide, the magnetic H.E.A.R.T. technology that’s replacing the standard potentiometer in the brake pedal makes a world of difference. Braking feels much more natural, approaching levels of feeling like an authentic vehicle in ways that Thrustmaster’s previous T3PA pedals could only dream of. 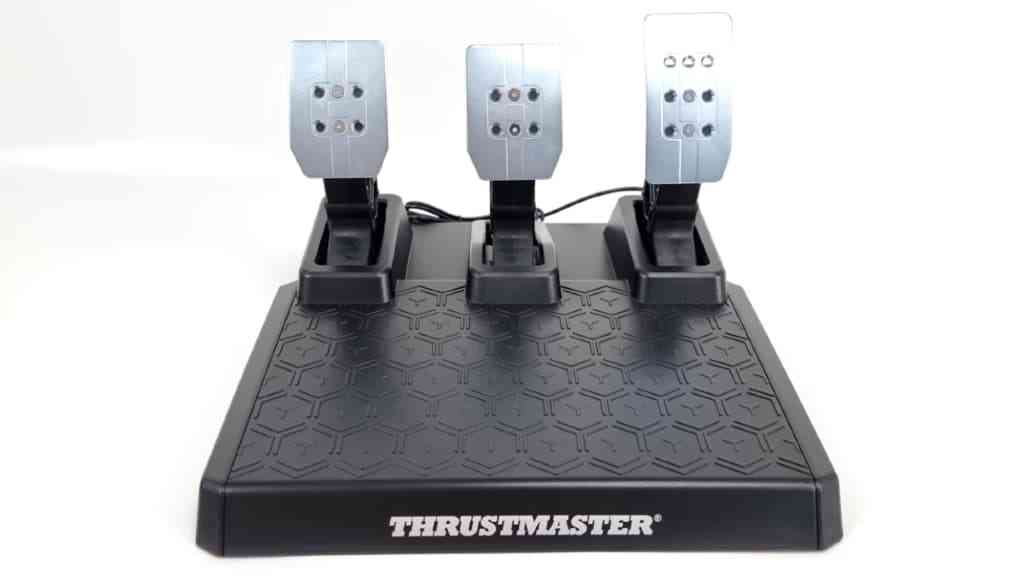 Nothing’s perfect, though, and The T248 comes with its fair share of issues. Coming from a purely belt-driven setup in the T300 RS, the T248 is much noisier than anticipated. I assumed that the belt would help alleviate most of the noise that gears tend to produce, but I don’t think the T248 is any quieter than the T150 – a purely gear-driven wheel.

I’m also not convinced that the pricepoint necessarily vindicates this over a T300 set – a unit that’s about $100 more. The T248 base doesn’t allow for the wheel to be swapped out, meaning you’d never be able to make use of the extensive line of aftermarket options available. And, given that the T150 can be found for much less, I worry that the T248 might not quite catch on for the entry-level sim racers like Thrustmaster is hoping it will.

Take the plunge, though, and I think you’ll find a lot to like.

Overall, I’m a big fan of the Thrustmaster T248. It’s been through the wringer with me and come out on the other side with primarily high praise. The force feedback provided will be more than adequate for the vast majority of people who use it. And the pedal set is fantastic, somewhat helping to justify the hefty price tag. It’s undoubtedly an improvement over the T150, and more importantly, it provides a world of difference compared to a standard controller. If this is your first foray into sim racing, you could do a lot worse.

***A review unit was provided by Thrustmaster***

A bit clunky/noisy
Hard plastic on inside of wheel
Expensive 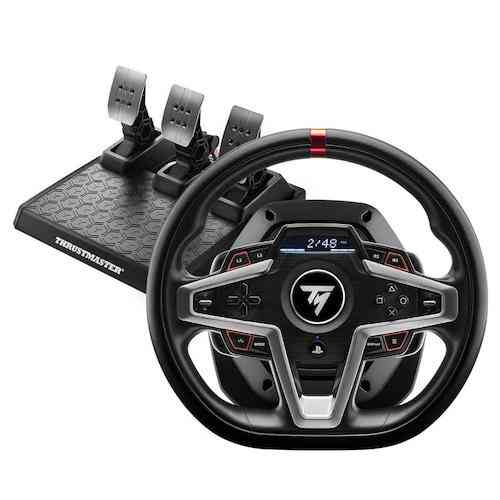