I’ve been reviewing and previewing plenty of Metroidvania as of late, and I can say that nothing has caught my attention as Unsighted has. Made by Studio Pixel Punk, a tiny indie team of only two people, this title is an incredible achievement in game design. It not only checks off everything that makes Metroidvanias good but also executes those points masterfully with their own unique flairs. Good combat? Check. Great movement and platforming? Check. Iterative puzzle designs? Check. Truly rewarding exploration? Check. Diverse powers and weapons? Check.

It even has an interesting story that will ask the player to make tough choices with large consequences for the characters involved, which means each of your playthroughs could look completely different. To add more replayability, there is a procedurally generated rogue-lite mode and a boss rush. As if that wasn’t enough, you can even bring a friend along for some jolly cooperation!

The Ties Between Story and Gameplay

In the futuristic world of Unsighted, humans have been mostly replaced by sentient androids after their attempts at trying to eliminate them backfired. Unfortunately unable to ever find peace, the androids have now begun to lose their minds, turning into savage killing machines without reason. You play as Alma, an android amnesiac who wakes up in a lab full of hostile robots.

I would say the game is a sci-fi post-post-apocalypse. You can find ruins of human civilization and the androids’ attempts at rebuilding which are also falling apart. It’s interesting, but it felt familiar, the game’s setting really reminded me of something else. Can you guess what it would be? Focusing on the female android protagonist who fights with swords might ring a bell… 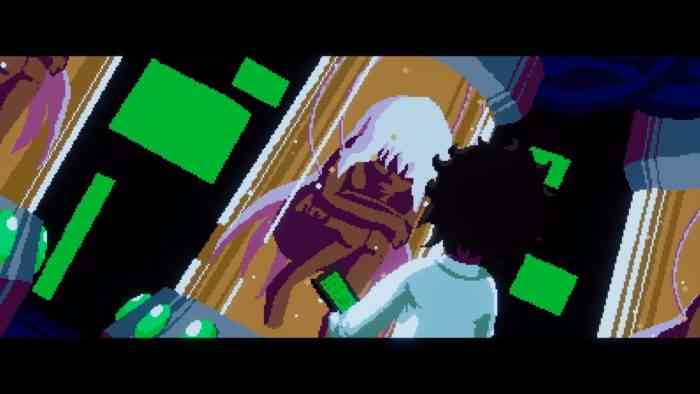 If you thought Nier: Automata, we are on the same page! The moment I realized that it was Unsighted’s main source of inspiration, so many things clicked. The upgrade system, for instance, utilizes the chip system from Nier. It revolves around having limited space where you can fit your upgrades while allowing you to change your chip layout at any safe point. This means frequently switching your builds depending on your playstyle and circumstance, with the added complexity of managing limits.

While the androids losing their minds was also a part of Nier, in Unsighted, it’s not only a story element, it’s a major gameplay feature. Every single character is going mad, including you. By consuming something called Meteor Dust, you can elongate the sanity of any character for a little longer. You will have to eventually decide who’s worth keeping around, perhaps for their utility, or for your relationship with them. It is genuinely depressing to see friendly faces turn into monsters one by one as the world empties of safe places. Time is ticking and every second matters, encouraging you to master the movement. Additionally, your death has consequences of fast-forwarding the time which provides large stakes to every battle.

The genius part of this mechanic is that you can use the Meteor Dust as currency as well. No, nothing inconsequential like turning it into money or something ignorable. It’s the only way to get more charges of your healing syringe. You can try ignoring it and use all your Meteor Dust “selflessly” by donating it to people, but the combat is extremely punishing. Eventually, the realization dawns that the time wasted by your deaths due to charitable actions may have led to more avoidable casualties. But should you spend it all on yourself? How much is too much? I’m being honest in saying that I’ve not seen a resource management system as impactful and interesting as this one in a long time, maybe ever.

Unsighted just feels good to control. Alma moves very quickly and precisely, with plenty of mobility options that you can master. The dodge/jump button nails that perfect spot of feeling fair while not being a skill-less spam button to get out of trouble. Falling off into the void places you back to your last safe spot rather than killing you, allowing you to take risks with their difficult platforming designs.

The exploration is the best I’ve seen all year. With it being player-led and very little gatekeeping, the devs seem very confident in giving players the power over the game flow. With creativity and skill, you can be in many places earlier without the “prerequisite” powers, and down bosses you were supposed to avoid. Exploration is truly rewarding, and can even provide you with new tools that offer you powerful new solutions to bosses and puzzles. This made me so happy because I personally hate it when games put obstacles in your way that can’t be beaten unless you do exactly what the devs intended you to do. Oh, you don’t have that power? Sorry, this boss can’t be damaged, or this door won’t open. It screams insecurity. Unsighted lets you go free in the world and tells you that if you are good enough, you can do anything.

When it comes to weapons, they can largely be categorized into melee and ranged. You can mix and match as you will, double ranged or double melee is no problem, with many combinations offering some unique interactions to play with. There is no specific style the game seems to prefer, and you can easily play the entire game with just ranged or melee, although using a bit of both would make your life easier. 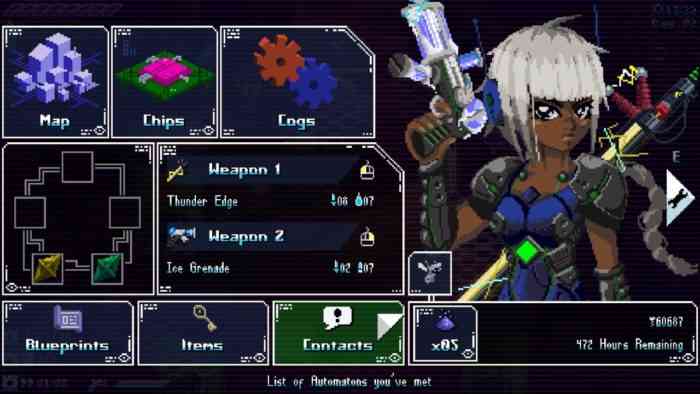 The balancing is pretty brilliant. Many games seem to have a pretty tough time with this, usually leaning heavily to one side. Ranged is of course safer, with active reload (ala Gears of War) making an appearance to rewards good timing. To emphasize this mechanic, you are drastically slowed and vulnerable while reloading as well. For melee, to compensate it being riskier, your hits deliver more impact as well as slowly refilling your empty healing syringes.

The weapons choice within each class also manages to be quite interesting and drastically different. For instance, many other games would have taken the axes and swords in this game and done the boring thing of just making one slow and powerful while the other opposite. In Unsighted, by creating a ridiculous stamina cost for swinging the axe around, you have to make each hit count, and due to the fact that parrying enemy attacks let you land a single critical hit, you get much higher returns on parries with an axe. This means axe revolves around slow, defensive play, while sword lets you get much more aggressive and dictate the pace of combat rather than having to wait for your opponent.

So Close to Perfection

Man, oh, man, I wish the writing was better. Don’t get me wrong, Unsighted’s story is not terrible by any means, and I tend to be on the harsher side in judging narratives. It’s just that what we have here is so generic that it lets down the exceptional ludonarrative set-up in the Meteor Dust mechanic.

I think the problem lies in the protagonist, Alma. I don’t judge solely on cliches, but an amnesiac protagonist certainly raised some red flags from the get-go. It’s a lazy technique that thrusts us into the action and lets us experience/learn things for the first time with the protagonist. The problem arises when the game eventually tries to make us care about something we have no connection to. Here, Alma gets flashbacks of her lover and friends, and she is filled with determination to find them. Sure, the short cutscenes are cute, but it takes more than that for me to fall in love, because I’m sure it took more than that for Alma to fall in love in the first place. Then, as amnesiac games usually go, the entire story revolves around piecing together the past, and the entirety of Alma’s personality devolves into the badass “I must find her” type.

The side characters, for as much emphasis there is with them, are usually one-dimensional and trope-y as well. Which I suppose is to be expected in a game that’s not really about dialogue. 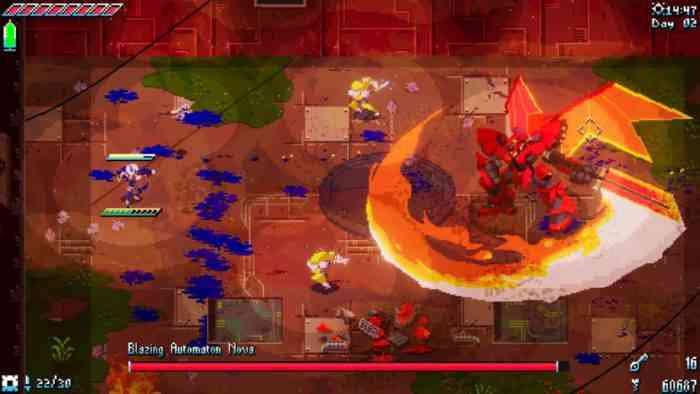 But that’s the thing, if all games were judged on their story, many masterpieces wouldn’t be very good, especially in the Metroidvania genre. A good story is a bonus, and Unsighted’s gameplay is fundamentally near-perfect. But I can’t help being disappointed at what this could have been with good writing. If I could have really fallen in love with the characters, it would have been so emotional when they turned mad, or if I was to be forced to choose between them and someone else I may need to beat the game.

But don’t let that discourage you from getting the game. With couch co-op and the addition of Steam’s Remote Play Together, you can play with another person with just a single copy, provided you have a solid internet connection. Unsighted is an utterly amazing title for a debuting indie team that is well worth your money and attention.