In 2001, the fantastic Samurai Jack premiered on Cartoon Network and sliced the hearts of many across the world. Not only did it introduce the samurai culture to a younger generation, but its stylish action sequences and colorful cast of characters engaged older audiences too. After a 14 year hiatus, Genndy Tartakovsky revived the cult classic, which has led to the latest game in the franchise, Samurai Jack: Battle Through Time.

Set during the bittersweet finale of season 5, we follow Jack as he ventures through time in order to defeat his nemesis, Aku. Central to the narrative is Jack’s relationship with Ashi which helps give purpose to each stage in the game. With the original voice actors, creator (Tartakovsky) and head writer (Backmen) at the helm, will fanatics get the sharp stab they’ve been waiting for or will it be more of a blunt prod?

Taking inspiration from games such as Devil May Cry, you progress through a linear level which is sectioned off as enemies appear. Once you have sliced and diced your way through the horde you may progress. Any hack and slash game lives and dies by its combat as this is central to everything you do and unfortunately, this is where Samurai Jack: Battle Through Time falls flat. Using a control scheme similar to classics in the genre helps to bring familiarity when decapitating enemies. You can quickly dispose of them by hammering out combos or simply by bashing one button. However, Samurai Jack lacks the nuances that made games such as Bayonetta stand out amongst the crowd. Strikes lack impact and evading is cumbersome making the combat feel like it needed more time in the dojo.

Samurai Jack’s art style is instantly recognizable. Its use of minimalism and sharp corners helped to build a vast and innovative world that fans have yearned to explore. Transitioning to the virtual world has proven difficult for many television franchises, and sadly, Soleil Ltd has also struggled to successfully recreate the world of Samurai Jack. As a fan of the franchise, visiting memorable environments from the show was a thrill. Whether you’re chopping down foes in Aku City or dissecting villains in Boon’s Castle, exploring your favorite areas will crack up those nostalgia levels. Regrettably, the excitement fizzles out in a matter of minutes. Areas are claustrophobic and lack inspiration in terms of design, making each stage feel like a slog rather than adventure. 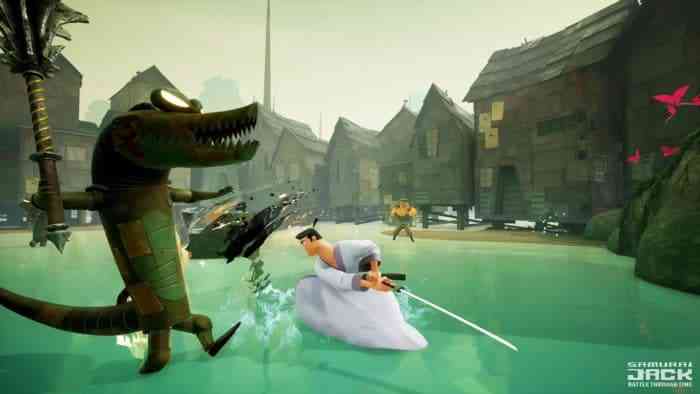 Creating 3D renditions of the characters was necessary in order to develop a game of this nature but its unimaginative method is what irked me. The bog-standard digitalisation of characters lacks the originality of the show and as a result, the game looks and feels dated. Using a cell-shaded graphical style may have helped anchor the title to the TV show but instead, we are given a mundane design that fails to capture the essence of the show.

Samurai Jack was famed for its style. Final blows would be accompanied with box frames, close-ups and slow-motion sequences, yet these are oddly absent in the gameplay. Although the cutscenes are well done and stay in line with the conventions of the show, the moment to moment gameplay lacks the style that we all associate with the television show.

Samurai Jack: Battle Through Time’s best moments come in the 2D sections. As the camera zooms out, it has a drastic effect on the visual fidelity making the game look much better. At times you encounter enemies and platforming sections but more often than not, these are simply transitional segments which lead you back to the monotonous battle arenas. 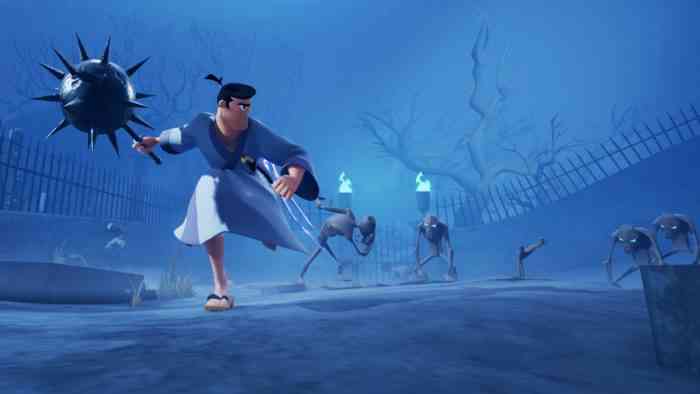 As you progress, you unlock a variety of weapons which comes with some cool looking combat animations. Although each weapon does feel different, they can also break which adds another frustration to your journey. Throughout the adventure, you will also collect both skill points and bushido spirit points in order to upgrade your warrior the way you want. You can unlock an array of combos which does make the combat slightly more interesting…but not much. In terms of replayability, there are a range of challenges to complete, and each stage is scored, so if you wish, you can revisit the icon locations and obliterate those who stand before you.

Samurai Jack: Battle Through Time is a mediocre trip down memory lane. Although interacting with beloved characters is amusing, its core gameplay is dull and repetitive. Fans may enjoy the new narrative that extends the epic conclusion of season 5 but be prepared to endure some blunt, boring combat. 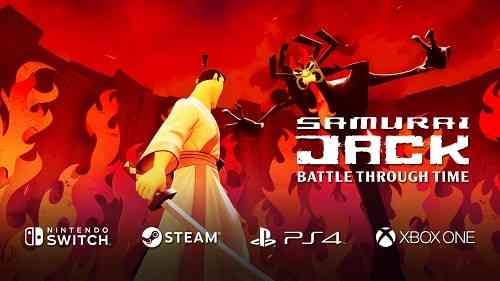 Samurai Jack Back in Game Form