My friends and I have a tradition of game nights leading back to when we were in high school. We are always on the lookout for good local multiplayer games for these occasions. Duck Game for the PC was one that a buddy of mine brought in. There is enough strategy involved to make it feel competitive, but the game does not take itself seriously enough to take away from just having a good time. When I heard that this game was coming to the Switch, I was excited as Duck Game really lends itself to the pick up and play style of the Switch.

The game itself is very simple. Your options are: jump, pickup/throw, shoot, and quack. The depth of the game comes from the weapons and their interactions. There are more than 50 different guns. Your arsenal includes chainsaws, lasers, and even muskets. These weapons come with neat interactions. If you throw a gun into fire, it will heat the ammo causing the gun to fire randomly. If you throw a box at another player, they will drop their weapon. Rev a chainsaw then slide on the ground and the saw will drag you along the ground. Little things that add a level of strategy to the game and will probably surprise a few players. There is no real tutorial for these interactions so new players will want to experiment.

There is no campaign in Duck Game. There are two modes: multiplayer and an arcade style challenge gauntlet. The multiplayer, this being a multiplayer game, is where Duck Game shines. Players have a choice between either local or online multiplayer for 2-4 players. Once the game starts the players are dropped into a 2D map with the goal of being the last one standing. The final winner will earn points and whoever gets the enough points to reach the milestone (usually 10) wins. There is a twist. Sometimes there may only be net guns and a lava pool. The game may spawn everyone with a gun that has one bullet and nothing else. It is these little tweaks and mutations that adds depth to each round and keeps things fresh. The single player part of Duck Game is series of arcade challenges that serve more for practice than a stand-alone game mode. The challenges are fun but to truly enjoy this game you will need either some friends or an internet connection. There is also a level editor. I found it to be quite intuitive even if navigating the menus with the joy con was a little tedious. If the Switch version follows the trend of the PC version, I expect to see some very well-done maps.

The game has a simple 2D look but is quite detailed. The different kinds of environmental hazards are easy to identify. All the guns look distinct and are easily recognizable. Each one fills a niche from ridiculous to powerful. The game has gone for an old school arcade vibe and does it well. The arcade theme extends to the music which goes well with the game and syncs up with the game pacing. Gun noises aren’t bad, some could have more pop to them, while others like the death ray have a unique sound. The quacking toes the line of being obnoxious and can convey either a taunt or a laugh which is perfect. 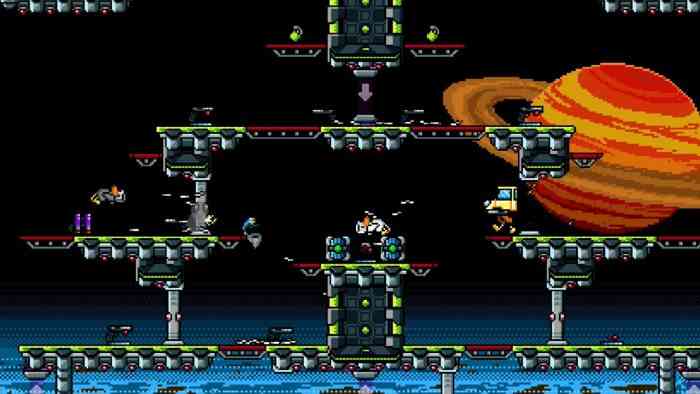 Duck Game is a fun local multiplayer game that is a great addition to the Switch. The game does not take itself seriously but can still create that competitive feeling to make you want to win. I had a blast playing this with friends. Duck Game is a good pick up for someone looking for a 4-player local that they can pull out for parties. While I did not have any trouble with the online multiplayer playing with people in person was much more engaging.

If there was a place Duck Game runs foul it is in the amount of content. While there are a lot of guns and interactions the rest of the game is shallow. In a party atmosphere rotating through games is no problem but playing through online multiplayer is a different story. The $13 price tag mitigates this somewhat, but I think some people will become bored should they play multiple rounds in a row. As a party game, I recommend Duck Game highly. As a personal purchase, I still recommend Duck Game because it is a simple game done well. 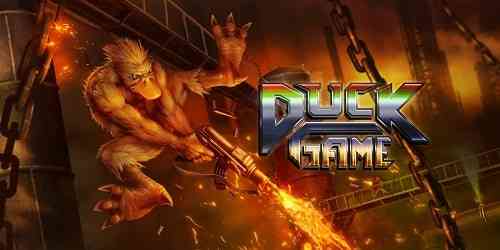