Recently I haven’t played anything other than Rocket League and I realized I hadn’t virtually killed anything in a while, so the voices were starting to get rowdy again. I was on the hunt for another game when I saw the trailer for Mr. Shifty. I was immediately reminded of a previous favorite of mine – Hotline Miami. Its senseless violence and punishing gameplay coupled with its instant respawn had me hooked for days. After playing through Mr. Shifty, I can say that while it might not be up to the same standard, it does a good job at scratching that same itch.

There isn’t much to the story for Mr. Shifty. You play as the aptly named Mr. Shifty, a teleporting thief with an identity shrouded in mystery. Throughout the game, you are guided by your commander, Nyx, who is there only to provide exposition and tell so-so jokes to Shifty, even though he never says a word back to her the entire time, or to anyone for that matter.

You’re tasked with infiltrating a building to steal a bundle of plutonium from a notorious crime lord, though we are never told anything about the past of our two protagonists and what their initial motivations are for this heist. Not knowing the reason why Shifty can teleport around a room, punch someone through a wall, and then teleport away again doesn’t detract from how fun it is, though. The story won’t win any prizes, but you can still have a blast blinking past bullets and sending bad guys to plummet to their death Hans Gruber style.

“The story won’t win any prizes, but you can still have a blast blinking past bullets and sending bad guys to plummet to their death Hans Gruber style.”

I’ll try to avoid too many comparisons to Hotline Miami, as Mr. Shifty brings its own to the table, but the map layout is the same top-down, floor plan style. It worked well then and it works well now, as it lets you meticulously plan your assault before you die a few dozen times and end up going in fists blazing, which surprisingly yields better results. The combat is very fast-paced and will rely mainly on your reactions to teleport out of harm’s way, but after knocking enough heads together you’ll build up charge for your slow-mo ability. This allows Shifty to dart around and take out a room full of enemies with ease, though it activates immediately and it will no doubt be when you least need it to.

If like me, you’d think that having the ability to teleport would make this game far too easy, then you’d be right. Being able to teleport at will and dodge bullets/weapons/fists makes the game a cakewalk. To tackle this, Shifty only has five ‘charges’ for his teleportation before he needs to take a breather and wait for it to recharge. It makes for a surprisingly difficult experience where you need to consider whether it’s worth using the last of your charges to teleport away and risk being gunned down without an escape, or knuckle down and fight off the last few enemies. 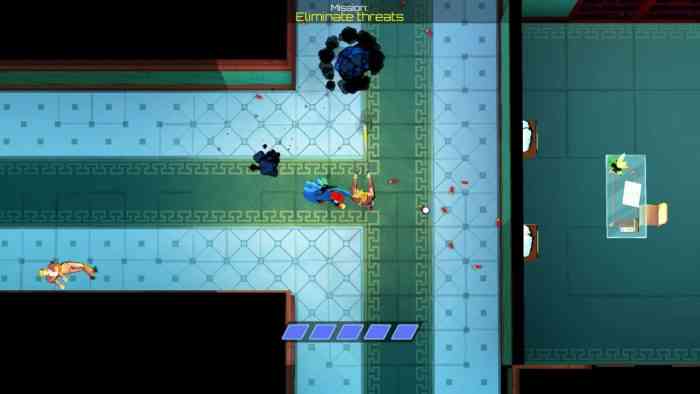 Implementing this system ensured that Shifty wasn’t massively overpowered, and it allowed the game’s difficulty to gradually increase without having the gameplay be monotonous. As time goes on, and you get used to how this teleporting business works, the game will introduce environmental challenges and traps for you to avoid or use against your enemies. The downside here is that, whilst the combat is great and the game’s mechanics are solid, it just ran out of ideas towards the end of the game. After a while, it just seemed to drag on and on, and felt like it should have finished a few stages before it did.

The teleportation adds what Hotline Miami never had – a way out. You can blink through walls, fire, and straight past missiles in the air. Shifty himself will die from so much as a strong breeze, so staying alive in a fight requires planning. All guns are given laser pointers to show the direction of the bullet, which allows you to teleport out of the way and then blink back into the action before the AI can even react.

Speaking of the AI, I found they were a tad too suicidal for my liking. The grenade throwers kept killing themselves whenever I hid behind a pillar, since they’d walk towards me to get line of sight and then step on the grenade they had just thrown, and others would walk like lemmings towards the freshly thrown grenades. There is friendly fire amongst your enemies, so I wasn’t so nit-picky on the occasions where this little blip saved my arse.

One of my other gripes with the game is the soundtrack. There’s only one song that plays on repeat, and though it started out as a great song to get me in the mood, it eventually just became background noise. A few different songs every other stage would work wonders, and keep my virtual, mass-murdering spirit up.

“All in all, Mr. Shifty was a lot of fun to play for the first few hours, but towards the end of the game it stopped introducing new challenges and started to stagnate.”

From start to finish the game won’t last you longer than three or four hours for a single playthrough, and there isn’t any reason to replay older levels other than to beat your current time or nab some achievements. For a price tag of $14.99 I’d want a bit more bang for my buck, but maybe they’re planning to implement some more levels, or splice in some community challenges to add some more gameplay.

All in all, Mr. Shifty was a lot of fun to play for the first few hours. The combat was slick and the levels were innovative, but towards the end of the game it stopped introducing new challenges and started to stagnate, repeating some rehashed areas I had already gone through. I have no doubt that I’ll play it some more if they introduce some new content, but until then it’ll be joining the hundreds of other forgotten games in my Steam library.

*** PC code provided by the publisher ** 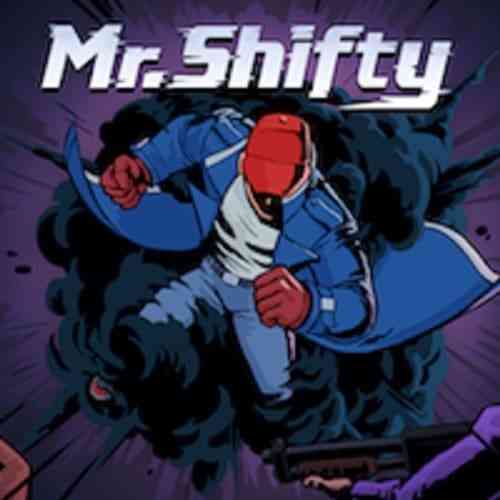