Glow Review – More Of A Fizzle Than A Glow

We all have games we enjoy for various reasons; One has better combat, another has fast cars, and yet another has hours worth of story to delve into. We also have games we play for specific reasons or needs, like cleansing the proverbial palate between long winded RPG titles or needing something you can jump into for a few rounds to clear your head before trying a boss fight again. Despite its potential, Glow is a title best suited for killing time while waiting for the latest AAA title to install.

Both developed and published by Impetus Games, Glow is a game grounded in simplicity: Players take control of a firefly in a small night time arena with only its own body as a source of light, while spiders and other bugs will spawn at set intervals and continually attempt to take you down. The firefly begins with a standard single shot attack with unlimited ammo and a heavy shot which requires replenishing through pick-ups from fallen enemies. This game didn’t have to be about bugs, it could have fit any number of other options and kept the same game mechanics, but not having applied even a basic story seems like a seriously lost opportunity given the setting Impetus Games chose.

“The idea of facing waves of enemies to gun down isn’t new; this game could have been about a helicopter and zombies, spaceships, any number of things.”

Granted not every title needs a deep, riveting tale of mystery and suspense, and maybe as an avid fan of narratives in video games I am always looking for a little more, but the choice to make this about fireflies and spiders and not explore that as a deeper meaning feels like a lost chance. The idea of facing waves of enemies to gun down isn’t new; this game could have been about a helicopter and zombies, spaceships, any number of things. 2009’s Deadly Creatures saw players control a tarantula and a scorpion – with no dialogue – and still put an interesting and intertwining story to it. Given the fact fireflies are associated with pleasant summer evenings of childhood and spiders are associated with nightmares and terrible things, there could have really been something more to it than this. 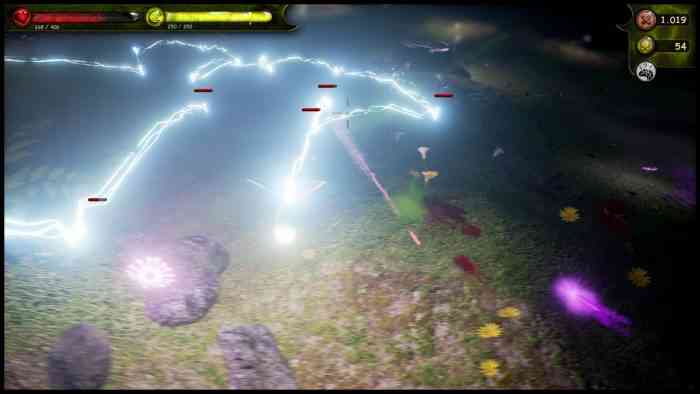 That isn’t to say the game isn’t fun. Floating around in the dark while focusing intently on finding the tiny spiders spitting death at you is certainly enjoyable. The haunting detail that went into the arena and the bugs really help set the tone, and the lighting effects are superb for this game. The field is simplistic enough to navigate easily but detailed with stones, flowers, patches of dirt, and small hills to not seem like a blank canvas but rather an actual live field. The barrier to keep you within the arena is a red honeycomb pattern that appears as you near it which looks nice, but it would be helpful if it were something a bit more consistently defined so you knew where you could dodge too and not just hit a wall at the last second. At the start of each stage, players are able to select from whatever upgrades they unlock (I personally enjoyed the shotgun blast) and will see displayed a list of how many of what kind of enemies to expect and the rate at which they will spawn, among other stage stats for the upcoming skirmish.

“With gameplay easy to jump into and simple, responsive controls, Glow is a great game for some quick, basic combat.”

Audio for Glow also lacks a bit considering the nature of the game and the fact you are alone facing a horde of spiders in the dark. The sound effects are nice but the actual music itself didn’t instill the kind of emotion I was hoping to get out of the game. The panic comes from how quickly your life bar can be drained as tiny spiders surround you, rather than a potent BGM to put you on edge. While the game does not offer a form of multiplayer it does tally the scores of your completed stages and puts you up on the global leaderboard, giving you a little extra motivation to hone your accuracy skills.

With gameplay easy to jump into and simple, responsive controls, Glow is a great game for some quick, basic combat. The insects and stages are nicely detailed with fantastic lighting effects but it’s easy to see the potential for Glow to be more than it is, especially given its content and lack of storyline/motivation. This is a game well suited for helping pass the time but sadly doesn’t offer a reason for players to become invested in it.