Total War: Warhammer – The King And The Warlord Is A Grudging Good Time

Total War: Warhammer continues to pile on the factions, and the latest offering of Total War: Warhammer – The King And The Warlord provides two factions, one mechanically solid, yet dull. The other however, is a fun new addition that help continue to flesh out how unique each faction in the game really feels. Players will be able to assume the role of the legendary Dwarven Hero Belegar Ironhammer, or the shifty Goblin Warlord, Skarsnik of the Crooked Moon. Each of the factions brings a fair bit of new gameplay, although one excels over the other. Read on to hear how each faction lines up!

Those coming into Total War: Warhammer – The King And The Warlord can expect to play as two factions that vary quite differently, although one suffers from a fair bit of familiarity. The green-skins however, get a fresh new faction that has their own special mechanic, and it captures the feeling of being a Goblin in the Warhammer universe through and through. Skarsnik and his shifty band of goblins are a treat to play, making snide remarks and mumbling to themselves as you order them around, and there is clearly a lot of polish to this faction in particular. Squig Herds, Night Goblin Squig Hoppers, and the new Goblin Warboss all help to bolster the Goblins forces, and boy will they need it. They can’t recruit any other units, but so long as they fly under the flag of the Crooked Moon, they are fair game. The units for the goblins all have a fair bit of polish to them as well, sporting detailed models and very good animation. On more than one occasion I got to see the Squigs proceed to devour various dwarven footmen as I proceeded to try and fulfill Skarsnik’s goal, taking the Karrak Throne.The goblins encourage hit and run tactics, due to their frail builds, but they excel more than any faction at being sneaky little bastards. The goblin’s guerilla sort of playstyle isn’t really seen in any of the other factions of Total War, so seeing Creative Assembly continue to innovate with these new additions is a treat, to say the least. 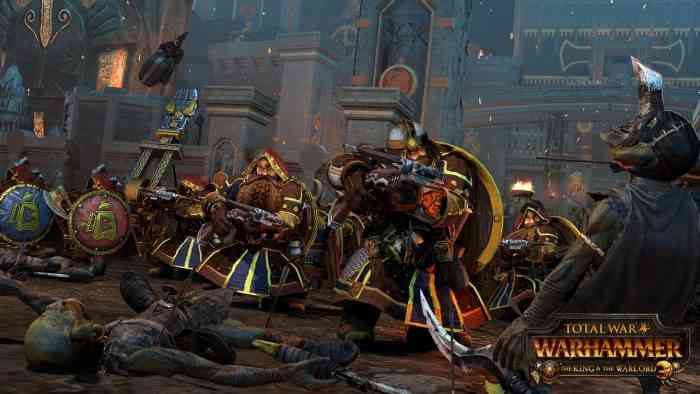 The Dwarven faction is a bit lacking, however. It introduces new units, but has no real deviation from the standard Dwarf gameplay. They make use of sturdy units that are hard to force to retreat, but they do get some new toys to play with that help soften the disappointment. The Bolt Throwers in particular are very effective at ripping through giant enemies. What better way to take down a slobbering giant or massive poisonous spider than with equally massive crossbow bolts? The Dwarven Rangers also help fill out the roster, but they do feel a bit dull in this case as well. Unlike the Goblin’s unique/lack of ability to recruit various units, the Dwarves just feel like an extension of the current faction, rather than a brand new addition, in the case of the Crooked Moon. Not to say they aren’t fun to play, though. If you feel like stroking your beard for extended periods of time, then the new Dwarven faction provides plenty for you to partake in.

“The goblin’s guerilla sort of playstyle isn’t really demonstrated in any of the other factions of Total War, so seeing Creative Assembly continue to innovate with these new additions is a treat, to say the least.”

Total War: Warhammer – The King And The Warlord ibrings a lot of content. Each of these new factions features new loot, new questlines, as well as other new support lord units that you can use in your Grand Campaign. The Runelord in particular is an effective support/heavy unit who makes use of runic magic whilst riding the Anvil of Doom (you could make a power metal album off of that description alone) into battle. This DLC in particular though, is clearly meant for those who know their Warhammer lore. These two characters have a very tightly intertwined rivalry, and Skarsnik especially stands out, seeing as he is quite possible the best goblin to have ever goblined. As you progress down each of the lords new skill trees, you’ll be able to help flesh out these warriors, and with all the new tools to bring into battle, you just may want to start a fresh campaign to either help reclaim Karrak for the Dwarves, or sneak your way in in true Goblin fashion.

**PC code was provided by the publisher**

Total War: Warhammer 3 Could Be Out On November 4th
Next Glow Review – More Of A Fizzle Than A Glow
Previous Toy Odyssey: The Lost and Found Review – Hauntingly Majestic