Back in 1995, LucasArts released the PC game Full Throttle. Designed by one of gaming’s great minds, Tim Schafer, the game was very well received and created a passionate base of fans (myself included). Since then, we’ve been desperately waiting for a sequel to no avail. Fortunately, Tim Schafer regained the rights for Full Throttle and now Double Fine Productions has given us fans a full remaster of this awesome game.

Full Throttle takes place many years in the future and follows the story of Ben, leader of the Polecats as he and his gang become entangled in a corporate scandal. Malcolm Corley, owner of the last domestic motorcycle company, Corley Motors, is near the end of his life. His business partner, Adrian Ripburger hopes to expedite his death and move Corley Motors in a new direction. Ripburger and his two goons, Nestor and Bolus, set a plan in motion to kill Malcolm Corley and frame the Polecats. It’s up to Ben to stop the evil shenanigans and save Corley Motors with the help of some unlikely individuals.

“Nowadays, a three to five hour game is sometimes a perfect treat for gamers looking for a quick fix on a weekend.”

Full Throttle is a point and click adventure. When you click on certain objects, you’ll be given a number of options (eyes, mouth, hand, foot) to action the object. Choose the wrong action with an object, and Ben will let you know. Along your journey you’ll also come across items you can use in different situations. For example, at one point you’ll need to siphon some gas from a security guards hovercraft – so you’ll need to collect a gas can and hose. You’ll place the can on the ground, the hose in the tank, and use the “mouth” option on the hose to suck out the gas. Full Throttle does a great job of spicing things up by adding a few non-point and click moments of gameplay. The most memorable of these types of moments are when you’re in control of your motorcycle and come across the occasional rival gang member where you’ll need to give them a few well placed punches to get them off of your road. One criticism of Full Throttle when it was originally released was the games length, which might take someone three to five hours to complete, depending on how fast you can solve the various puzzles. Nowadays, a three to five hour game is sometimes a perfect treat for gamers looking for a quick fix on a weekend. 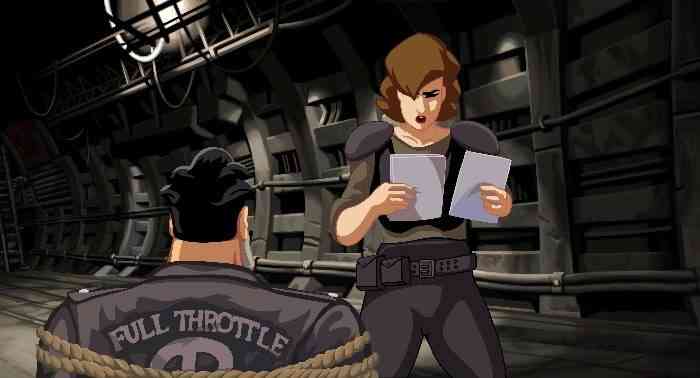 Full Throttle Remastered retains the entire story from the original. In fact, with the press of a button, you can revert the game to the original look and sound – which is a great touch. I often found myself switching to the original look in most areas, just to recall what it looked like. The remastered visuals aren’t going to win any awards for best looking game this year, but it still looks great. The sound has received an upgrade as well, which is great considering the games soundtrack and cast (more on that later). The game has over 100 concept art pictures and a pretty substantial amount of audio commentary with many of the games key developers like Tim Schafer offering insights into the games development. The PC version, which we reviewed, offered full controller support – if for some strange reason you had the crazy idea of playing a point and click adventure with a controller. If I had my way, I would have liked to see some of the concept art, videos and maybe even a playable demo of Full Throttle’s two sequels that were both in development, but subsequently canceled. This would have given us a fans a more complete Full Throttle package.

“Full Throttle Remastered is the perfect opportunity for gamers who missed out on the original to play this piece of gaming history.”

Double Fine Productions remastered all the music and sounds (including the voice acting) for this remaster. Compared to the original, the voices sound more clear and the music sounds more full. In fact, I didn’t quite recognize one of the music tracks near the end of the game until I switched it to the original mode, which just shows how much some of the sound was sacrificed in the original release. The music in Full Throttle has stayed with me for the twenty plus years since it’s release. The soundtrack features some perfectly fitting tracks from San Francisco band The Gone Jackals (many of the tracks were taken from their album Bone to Pick). Needless to say, Full Throttle has always featured one of my favorite video game soundtracks, and the remaster is no different. The voice acting is nothing short of brilliant. Mark Hamill takes on the role of villian Adrian Ripburger – which has a slight “Joker” sound to it (which makes sense, as he’d started his role as Joker three years prior on Batman: The Animated Series). Roy Conrad provides a masterful performance as the rough, yet caring voice of Ben, the games protagonist. 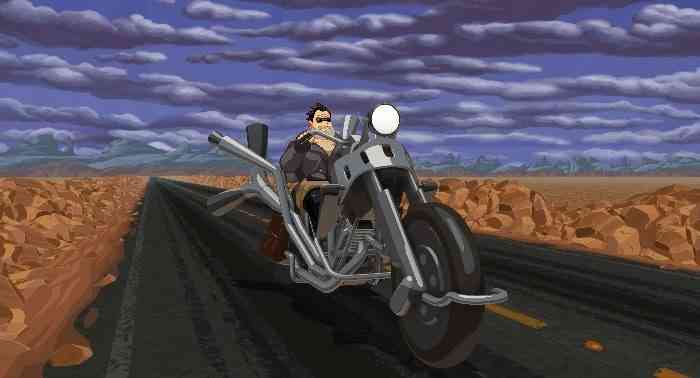 Full Throttle Remastered is the perfect opportunity for gamers who missed out on the original to play this piece of gaming history. In my opinion, Full Throttle is one of the best point and click adventure games ever made. While some of the gameplay might feel dated to younger gamers, and the short length might turn a few people off – for everyone else looking for a fun adventure that’ll take no more than a rainy afternoon to play through, Full Throttle Remastered is an easy choice. It’s unlikely we’ll ever see a true Full Throttle sequel as Tim Schafer recently said that he felt the Full Throttle story was “complete” and unfortunately, Roy Conrad, who was the (irreplaceable) voice of protagonist Ben, died in 2002. So, for the time being, we’ll just have to settle for this brilliant remaster that gives us a fans a complete version of this amazing game. 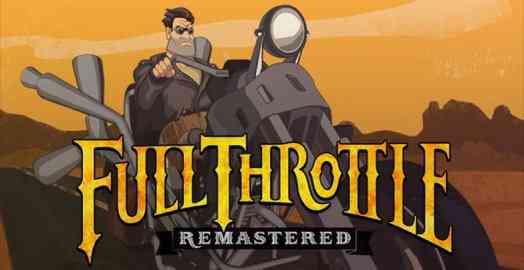