Orcs Must Die! Unchained is the latest entry in a series all about using traps and tricks to annihilate armies of orcs, kobolds, ogres and other monsters before they reach their goal. Whereas the first game in the series was a strictly single player experience, this latest game lets you fight armies of hapless beasts alongside friends. The game does come with a healthy selection of lore, although you’d be forgiven for casting it aside. Not to push aside the established narrative, but the core gameplay is compelling enough to eclipse the rest of the game. Robot Entertainment pretty much pioneered the third-person tower defense genre, and every new release works to hone the formula a bit more. Unchained retains this essential core while adding in sufficient amounts of new content to be worth investing some time in.

Among the new features, the highlight is Sabotage mode. You and a couple of friends are slaying Orcs in the usual way. Suddenly an enormous horde of Kobolds come screaming through with their speed boosted to twice its usual level. This fresh hell is courtesy of your actual opponents, the team of three with whom you’re indirectly competing. This is how the battles go. You choose the right time to trip up the other team with devious schemes, and they do the same. It’s a simple change that adds competition to the formula with less toxicity than you normally see in online play. Commonly known as asynchronous multiplayer, it’s a system used by games to encourage competition and communication in a game that isn’t inherently built for these types of play. The Orcs Must Die! tower defense model doesn’t lend itself to direct competition, but the addition of asynchronous components lets you humiliate your enemies while never meeting them in battle. If you’ve got voice chat set up or some other way of soaking in the suffering of your opponents then your victories are all the sweeter. My time with Sabotage mode was a LAN-party setup wherein exultation and agony was on clear display. Your mileage may vary, but I highly recommend a multiplayer configuration where your victims/aggressors can voice their suffering and/or joy. 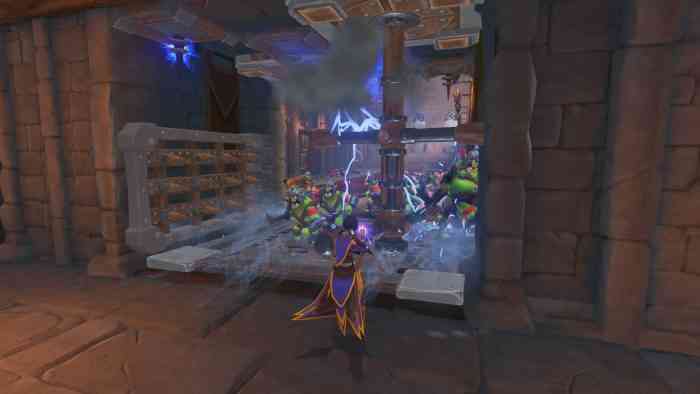 OMDU is heavily informed by tone. The audio and visual elements are lighthearted and fun, which is essential in offsetting the inherent frustration baked into the challenge. Every character is loaded with chuckle-worthy quips and one-liners. The graphics have a cartoonish flair that perfectly complements the physics at play. Orcs are meant to be flung, whether piece by piece or perfectly intact. Not to mention the victory dances. Winning feels good here, and those goofy moves your hero puts on make it feel so much better. The prologue is dripping with charm, while the battlegrounds segments are a bit lacking by comparison. Once your training wheels are off, the focus is laser-guided towards survival. I found the challenge level spiked significantly once I got to the main game. On the plus side, Orcs Must Die! remains a strategy-first game to the core. Though I was hampered by a series of missteps and deaths, once I discovered a fix for any given stage it remained reliable ever after. The enemy AI is clever yet predictable. You can count on them to stick to a path if it proves the most efficient one to travel. Thus, even if I wasn’t winning loot or currency for my lost battles, I was still gaining skills and experience in an organic fashion.

“The graphics have a cartoonish flair that perfectly complements the physics at play.”

The free-to-play model is fraught with peril. It’s all too easy for a F2P game to get into a pay-to-win style trap. Developers don’t often design things this way. Players will simply gravitate towards a game’s dominant strategy, and for F2P titles, this usually involves some aggressive spending. To their credit, Robot Entertainment has crafted a system that leans more on skill and strategy than luck. Depending on your goals while playing, you’ll find no shortage of satisfaction in mastering the available stages. Acquiring all the unlockable content without paying would take an immense time commitment, but you’ll log in a sizable chunk of time before you feel any paywalls. This is one area where the multiplayer is both a blessing and a curse. On the upside, human opponents are great for extending the life of a game. The downside being that talented human opponents are partially what drive players towards dominant currency-based strategies. I found the loot tables didn’t always work in my favour. More often than not, my rewards for completing a stage were merely currency for slowly upgrading my existing traps. I wanted more in the way of guardians or heroes as rewards for my time investment, yet I still enjoyed the slow process of improvement. The nature of the game means you’ll be replaying stages repeatedly just to crystallize your strategy for success. You might find the pace of the grind too much at times, yet the game itself is still addictive fun that’s hard to stop.

Orcs Must Die! Unchained is best consumed with friends, ideally with a lot of yelling and frantic arm-waving over impending victories and losses. The single-player game is good, but it lacks the high-paced frenzy that comes with challenging human opponents. I never encountered any hard paywalls during my time playing the game, but you might be tempted to pump money into your account just to move things along. You need tricky humans to battle against (or alongside) in order to keep things exciting. Although things might slow to a grind at times, I still feel compelled to keep playing until I unlock a few more heroes to mess around with. Unchained is a perfectly respectable entry in the series, but the multiplayer pushes it to must-play status. 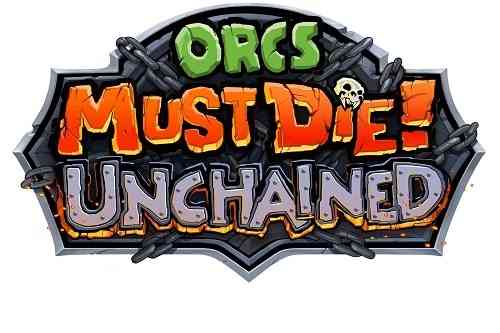 The Top 5 Beginner Tips for Orcs Must Die! Unchained