Fragments of Him Review

An interactive narrative is one of the hardest things to pull off in a game as it is always difficult to please the entire gaming crowd. A company like Telltale Games has found resounding success in creating an engaging story in worlds like Game of Thrones, Tales From the Borderlands, and Batman but even then, the ‘lack of gameplay’ has put many gamers off, regardless of compelling storytelling. Enter Fragments of Him, an interactive narrative that tells the story of Will and more to the point, Will’s death. While the intentions of Fragments of Him are lofty, the execution leaves much to be desired, feeling more like a movie that long overstays its welcome than a powerful examination of loss.

Fragments of Him focuses on the titular character, Will, and the final days leading up to his untimely death. It follows him, his partner, his ex-girlfriend, and his grandmother as they flesh out Will’s life and how they inevitably deal with the news of his tragic passing. The story is moving, touching on a topic that we all must deal with and doesn’t do it in an exploitative way. Will’s death never feels like something done for shock; instead, it feels like a jumping off point for digging through his life. As his relationship with Harry is explored, you play as Harry, Sarah, Will’s ex, and Mary, his grandmother. Each one of them fills in a little more backstory, allowing us to understand how Will’s death affects each of them.

As I mentioned before, games like the ones from Telltale have put other gamers off from a lack of actual gameplay. Some people are put off by simply walking through a story without any real control other than decision making. It’s not inaccurate for such players to wonder if they couldn’t just be watching TV or a movie instead. Fragments of Him tries to get past that hang-up by forcing you to interact with the environment to advance the story. Walk around the various stages that unfold a section of the story and find the items to click to advance the narrative, revealing more about that piece of the story.

“The story is moving, touching on a topic that we all must deal with and not doing it in an exploitative way.”

While this does allow you to interact more in the game than having a decision tree, the ‘interactive’ level of the game, much like its storytelling, falls flat on its face and only compounds the issues Fragments of Him presents, rather than alleviating them. The interaction with items around a kitchen being set up for Christmas, let’s say, reveals how Will’s grandmother felt about her grandson being gay. This sensitive subject that has quite a bit of impact later on down the line is completely inert as it’s very easy to miss the next item to click and spend several minutes searching it. This, of course, allows you to completely forget the first half of the sentence and you basically lose the entire point Mary is trying to make. This problem, as I said, compounds as the game goes on and the disjointed delivery manages to suck almost all emotional impact out of every scene. 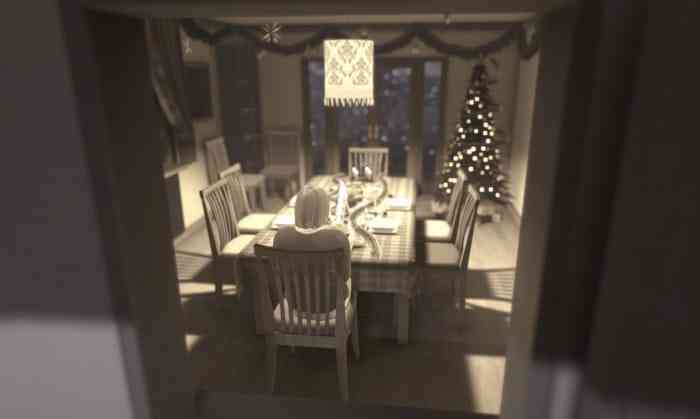 The story itself, while very well crafted, falls victim to its own mode of delivery. The interaction with items fractures delivery but it also creates bizarre dialogue choices. It’s almost as if they realized that there’s a chance you’re going to start losing information along the way, so they wanted to quickly remind you who they were talking about. Not only that but just reiterate that it is, in fact, Will they are talking about by saying his name in literally every other dialogue segment. So, not only did I lose my emotional attachment to what was happening, I’d now developed a visceral reaction to the name Will.

“In the end, Fragments of Him is a well thought out story that ultimately is undone by its gameplay choices.”

To be fair to Fragments of Him, the biggest issue with the story is how they chose to deliver it. If the game was done in a different medium, I’m positive that it would be just as impactful and important as Sassybot was aiming for. However, as a video game, it hampers the storytelling and forces you through tedious tasks to uncover what is sometimes only one or two sentences. Forcing me to ‘play’ for 20 minutes to uncover information that could be delivered in a paragraph in a short story or a scene in a film is not the best way to deliver your story.

In the end, Fragments of Him is a well thought out story that ultimately is undone by its gameplay choices. By trying to make gamers interact with the story more, the story became even more inaccessible. While I can appreciate the sentiment that Sassybot was gunning for, the delivery ended up being the undoing of a compelling storyline. Hopefully, the creative team can find the best outlet for their stories and use this game as a learning tool for their next project – and I do hope they have a next one.