The greatest challenge in reviewing Touhou Kobuto V: Battle Burst lies in explaining exactly what this game is. The chibi characters and upbeat music suggest you’re about to play something lighthearted and fun. This is half-true. A quick look at the trailer gives the game a 3D fighter vibe. This is somewhat accurate, but not exactly so. No, the clearest indicator of what’s in store for you is the first word in the title, Touhou. Beyond anything else, beyond any of the descriptors, I will assign this game in the vain hope of getting it right, you must understand Battle Burst as a Touhou game if it is to make any sense at all.

Touhou games are known for their punishing difficulty, their memorable characters and their oddly compelling music. Battle Burst is the latest in a series of spinoffs which take the original Touhou formula and apply to a separate genre. Whereas the main series is a collection of bullet-hell shooters, Battle Burst is… still mostly that. This game merely takes place in a 3D arena rather than a 2D field. While this looks a bit like a fighting game, all of the combat revolves around dodges, guard moves, projectiles and spell cards. The narrative is a single day told from the perspective of each of the fighters. The story segments are simple, lacking even proper voice-acting, but they manage to convey the circumstances and tone surrounding every battle. The characters’ attitudes and appearances more or less match up perfectly, but don’t let those cute exteriors fool you. This game doesn’t mess around.

“Touhou games are known for their punishing difficulty, their memorable characters and their oddly compelling music.”

The first time I fired up this game I spent a good thirty minutes getting mashed into paste by my very first opponent. This isn’t due to the overwhelming difficulty as much as the incredible strangeness of the mechanics. You have three different kinds of attacks, each of which changes form. You have a jump, dash and spell card command to use as well, along with a long list of combinations involving each of these moves. At first, I was spending time dodging and learning movement patterns, but you can’t do this and deal damage at the same time. If you dash for too long you end up stunning yourself, which is a death sentence. If you rely on only one attack you’re in just as much trouble. Eventually, I figured out a rhythm that kept me alive and winning matches. 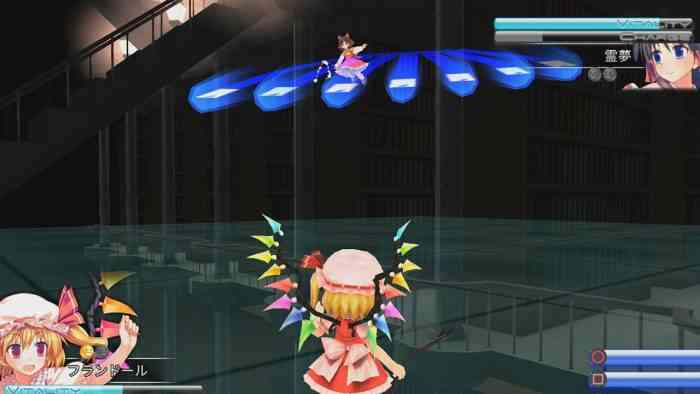 Every character feels a little different. The move list is the same for everybody, but everyone’s moves behave in unique ways. Charge attacks with two different characters do totally different things. Marisa’s charge attack is for aggressive offense, while Remilia’s charge move operates like a shield. Even the spell cards have their own unique behaviour from one character to another. When you fire up the story mode for the first time, you’re locked into a single character until you finish the campaign with them. This pattern holds until you’ve played through the stories of all the major fighters, then you’re able to pick whoever you want. Being forced to get good with one character after another really hammered home how distinct their fighting styles were.

I was a little disappointed by this game’s soundtrack. That’s not to say the music is bad, just that Touhou music is sort of legendary. The main series of games features songs that are incredibly fast-paced, complex and unspeakably catchy. There’s an entire cottage industry built around covering these songs in Japan. By comparison, the songs in Battle Burst are good, but not as good as I was expecting. On the one hand, I may be working with a bias. On the other hand, just listen to these things. I also wanted a little more from the story. The multiple takes on a single event can be fascinating, but this was not a compelling or eventful day. The boss you fight for most of the characters is a giant, bouncing head. This falls in line with the somewhat goofy aesthetic, but it still falls a little flat. Conversely, the fighting is amazing, and there are plenty of opportunities to engage in whimsical, brutal combat. If you’ve no patience for the story mode, you can simply sharpen your skills in the Arcade and Score Attack modes. Finally, there are no instructions for unleashing your spell card attacks. This was another roadblock that took some extensive experimentation to surpass. I eventually found success through smashing the three attack buttons and the guard all at once. Is this the right technique for activating your spell cards? I have absolutely no idea.

“Being forced to get good with one character after another really hammered home how distinct their fighting styles were.”

Here’s what you need to know about Touhou Kobuto V: Battle Burst. This isn’t a long game. Once you get the hang of the many complex systems that make up the combat, you can pretty much clean house in the single player. This is a Touhou game, which means that it’s harder than you expect, but it’s a spinoff fan project, so it’s not as hard as it could be. This isn’t exactly a fighting game, but you learn all the systems like you would with a fighting game. This is a cute and colorful game, but you’re expected to play it like a very serious title if you hope to succeed. I can’t totally ignore the flaws present, and I suspect that many potential players will not be able to either. But this is a rock-solid title nonetheless. If you know the Touhou name, or even if you know the masochistic joy of bullet-hell gaming, Battle Burst is worth checking out. 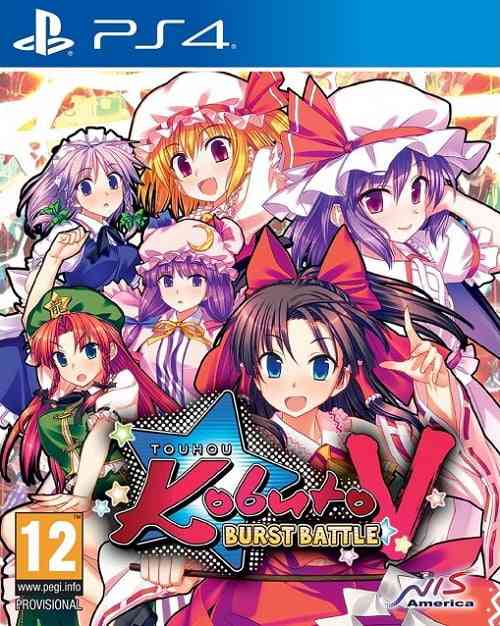 
A Cult Franchise Is Being Removed From the Playstation Store

Play Disgaea 2 Free This Weekend on PC
Next Fragments of Him Review – Touching LGBTQ Supportive Story Falters in the Delivery
Previous Egglia: Legend of the Redcap Review – An Eggstravagant Adventure