The story of Debris follows three scuba-divers, Sonya, Chris and Ryan who are on a mission to extract pieces of a meteorite from underneath the ice shelves. Just as the trio come across some strangely fluorescent fish, a series of loud quakes drags them down to the deep, dark depths and far away from each other. The trio work for a company known as ALTA which harnesses the energy of the meteor debris and as the plot unfolds, Ryan discovers a more insidious agenda at play. Chris and Sonya resist him at several points, getting overly defensive at times and sabotaging his progress through the underground tunnels at others. Sonya is the more helpful of the two teammates but she’s more easily annoyed than the crazier Chris while Ryan seems like the most logical and level headed of the three characters.

It’s important to discuss plot elements because although the story is an interesting one, parts of it are predictable and it’s mostly told through exposition. The dialogue between Chris, Ryan and Sonya acts as the main form of storytelling and the voice acting for each of the characters is solid. Ryan is apparently the most seasoned ALTA diver and he claims to be familiar with such missions several times but he seems quite ignorant to the experience as Sonya has to explain most of what the mission is. She still acknowledges his previous experience with ALTA but explains even the simplest intricacies to him as if he was just hired. I feel like if Moonray Studios should’ve just told the story from a noob employee’s perspective so that these bits would be easily explained.

For most of the traversal through the underwater tunnels, Ryan is chained to Sonya’s Squid pod which keeps your suit energized. The energy is required not only to survive the depths but also shoot flares and lasers depending which foes you’re facing. Some fish swim away from flares while others eat them. The laser will kill the smaller fish but bounces off the big fish and sharks. The problem with relying on this Squid unit to keep going is it doesn’t always respond to my commands and it gets stuck sometimes, preventing me from moving too far without dying and ultimately creating a game-ending bug. The first couple of times this happened weren’t so bad as the early stages are quite linear, but eventually, when things open up, it’s very hindering. Even when Sonya isn’t trying to prevent you from doing something, she inadvertently gets more than the sharks. Although energy is required to fire Ryan’s weapon, the FPS mechanics are questionable, requiring me to shoot slightly above a fish I wanted to neutralize. I did enjoy the flares and how they interacted with the rocky surfaces and the ocean itself. 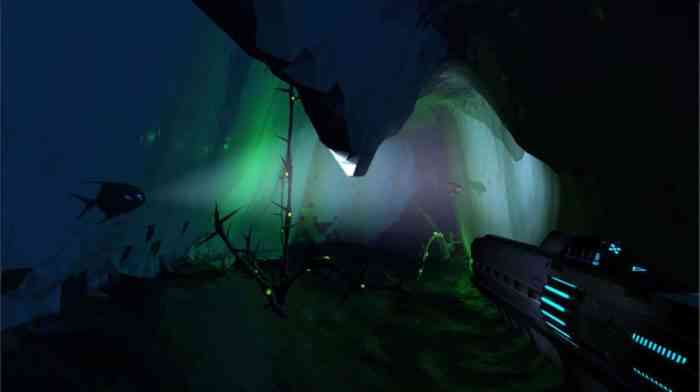 The music and general darkness of the murky waters come together to create an ominous and tense experience. I struggle to call Debris scary but I was definitely on edge at times. The fish mostly look the same as each other, they just come in several sizes. The most interesting enemy AI are these giant earthworms that shoot out from the sides of the underwater tunnels in an effort to crush Ryan. The fish function drastically different from each other which adds to the experience but the 3-D models look like they could fit onto a PS2 game. Similarly, the short draw distance would be familiar to a game from that generation as well, although it makes sense that the draw distance is short when Ryan is trapped in murky waters. The minimalist visuals start from the main menu and continue through most of the experience with repetitive level design and enemies.

There are some noticeable issues I encountered throughout my time with Debris. The primary issue is a complete lack of control when the game is paused and unpaused. For about five seconds after unpausing, none of my inputs are registered despite the fish, Sonya’s Squid and everything else functioning as usual. Because Sonya’s Squid stops following me at random times and is the only game-ending bug I encountered. There are several times where the HUD becomes warped or staticky as I progress from one chapter to another but this is explained in the plot. Many other times, however, I discovered choppiness that I’d dismiss as latency but for my playthrough, I was riding solo. It seems to come towards the tail end of a mission as if it’s already loading the next one, even though the load times are pretty outrageous for how visually undemanding the game is. The load screens are made worse by mostly just being a black screen with no tips or art to stare at.

Although I quite enjoyed the story of Debris, it was told mainly through conversation between three characters and a lot of it was predictable. I liked the use of energy and relying on what is essentially a battery that follows you around but it doesn’t effectively follow even when I press the input to bring the Squid to me. I had issues with the visuals of Debris but the music would be familiar to any cheesy horror movie. This combines with the darkness of the underwater tunnels and the short draw distance to create a tense experience. The intensity is made even worse when the bugs kick in or the game starts to lag, breaking my immersion. With so many fish, it’s weird also seeing so many bugs in Debris. The repetitive levels and enemy AI get old quick but the fish react to things differently which is engaging and the environment tells a story as you uncover glowing orange Debris deeper underground. If you don’t mind minimal visuals for an interesting story, Debris is worth checking out. 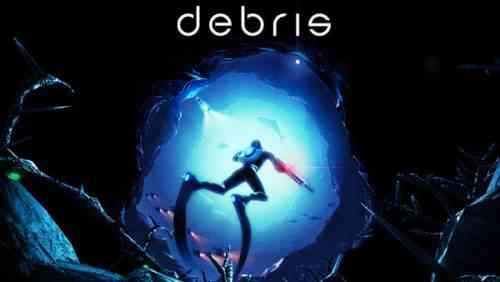