For decades, Capcom was among the best developers when it came to the fighting genre. For a time, the Street Fighter franchise was the premier fighting franchise in gaming. Of course, in recent years Street Fighter games have been plagued by poor design choices and ridiculous paid DLC practices. Fortunately, the company has a treasure trove of fantastic classic fighting games that gamers like me enjoy replaying to recapture that nostalgic arcade feeling. The Capcom Fighting Collection brings an assortment of classic arcade fighting games together in one package, including games that were never released before on home console or PC and games that were never released in North America. Shockingly, this is the first time North American gamers will finally get the entire Darkstalkers franchise in one collection – an exciting prospect for me personally.

The Capcom Fighting Collection includes 10 classic arcade fighting games. They’re all essentially untouched, aside from some minor gameplay tweaks and improvements to ensure an optimal experience. Each game has a variety of options that players can adjust, such as difficulty, screen filters, and more. These options should make the overall experience accessible to the widest audience available. Even so, Capcom fighting games are notorious for having some really cheap AI. Even on the easiest setting, I found Hyper Street Fighter II to be a bit of an unfair grind against CPU players that constantly spam special moves over and over and over.

The best part of the Capcom Fighting Collection is the inclusion of all five Darkstalkers fighting games, together for the first time in North America, in one package. I loved playing the original Darkstalkers game in the arcade, so finally, after all these years, getting the chance to play the whole series is an absolute treat. Even when this review is completed, I’m confident I’ll be jumping back in for more Darkstalkers action for months to come. My hope is that if enough folks enjoy these Darkstalkers games, Capcom will finally commence work on a brand new Darkstalkers title. 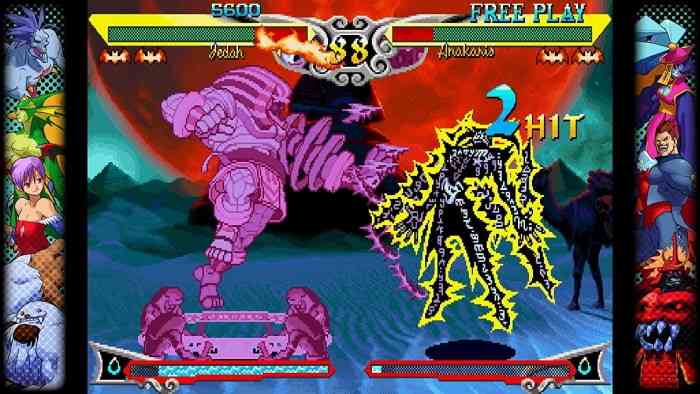 In addition to the Darkstalkers games, there are five additional games. Hyper Street Fighter II is essentially Super Street Fighter II on drugs. You’ve got a variety of speed options to choose from. If you opt for some of the faster settings, the gameplay is just a blur of kicking and punching. Even the background characters act like they’re on meth. As mentioned earlier, this version also has some pretty brutal and cheap AI. The CPU are absolute masters and it will take a lot of grinding and patience to be successful. Still, it’s nice to have some Street Fighter included in this mix, especially if you have a friend over for some one-on-one action.

Super Puzzle Fighter II is also included in this collection and is among my all-time favourite puzzle games. It’s reminiscent of games such as Dr. Robotnik’s Mean Bean Machine. In Super Puzzle Fighter II, you’ll try and combine as many like-coloured gems together as you can. Eventually, a flashing orb will appear, and if you combine the flashing orb with the same-coloured gems, you’ll send an “attack” at your opponent. It’s fun, intense and a must-play. I invested many hours of time into it when it was released on Xbox 360, and I’m looking forward to investing many more hours here on my PS5. 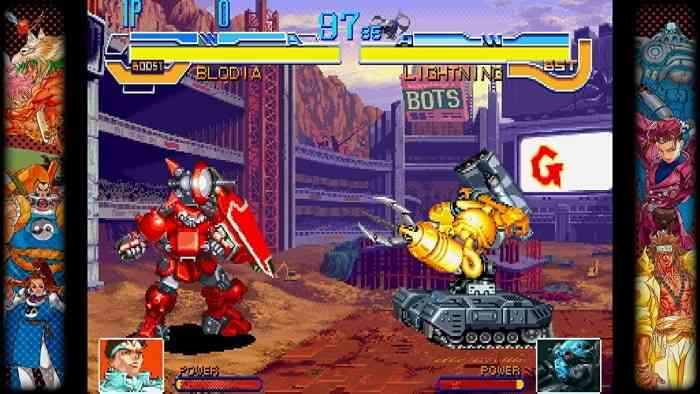 Rounding out the Capcom Fighting Collection is a trio of games that were completely new to me. Cyberbots: Fullmetal Madness is a fighting game that has players pick one of four mechs to pilot. In truth, this game was probably the weakest of the bunch. It’s not something I imagine I’ll find myself playing much in the future. Red Earth, which has never been released on consoles, is a unique fighter that incorporates some minor RPG elements and a password save system. And finally, Super Gem Fighter Mega Mix sees a handful of beloved Street Fighter, Darkstalkers and Red Earth characters squaring off in cute, chibi-style fashion. While I’m not a big fan of the goofy chibi style, I will say that the level backgrounds are some of the most adorable images I’ve ever seen in games.

In addition to the included 10 games, fans will be happy to know that this collection includes a fairly robust Museum section that includes hundreds of pieces of art and design documents as well as hundreds of music tracks – including some new remixes. While I would have appreciated a bit more insight into the individual games, such as a timeline, interviews and some more backstory – the Museum still has a wealth of content that I enjoyed. 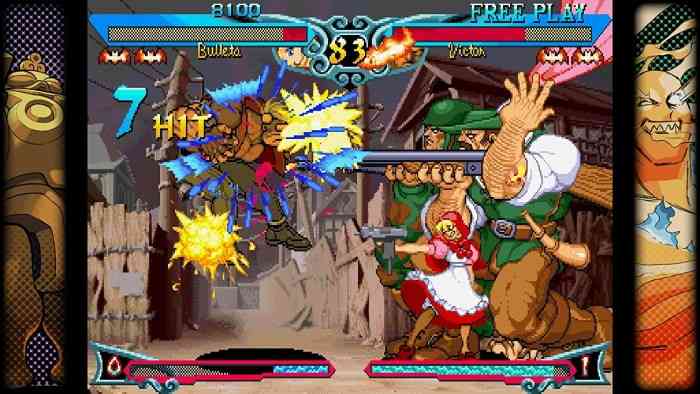 Capcom Fighting Collection includes both local and online multiplayer. Unfortunately, I can’t speak to either, as I couldn’t find any online matches and didn’t have anyone local to play against. With that said, I will say the way they set up the online multiplayer is quite clever. You can select which of the 10 games, or all 10 if you want, and the game will search for an opponent matching that exact criteria. I was worried that you might need to search for opponents for each individual game, but that’s not the case! Some other criteria you can tweak are the Game Version, Cross-region Matchmaking, and One-button Special Moves. In addition, while you’re waiting for a match, you can choose to explore the museum or play the games offline.

While overall, the Capcom Fighting Collection is pretty good, there are a few things that I wish they had handled differently. The game allows players to “Quick Save” anywhere in the game. This is perfect if you need to go do something and come back later. The problem is, that quick save is shared among all 10 games. So, if you have a quick save on Hyper Street Fighter II, you’ll have to overwrite it if you quick save on Darkstalkers: The Night Warriors. What a bummer. Also, the visuals haven’t been touched in decades. If you’ve got a big-screen TV like me, far bigger than the old arcade screens, the visuals will look very pixelated. These games, especially the Darkstalkers franchise, deserve a proper remaster with updated visuals.

This last issue is an odd one, but worth noting. After completing Super Gem Fighter Mini Mix as hidden character Dan, during the ending cutscene, Sakura tells Dan that “All your moves look retarded…”. It was a bit shocking, to say the least. I’m surprised it wasn’t edited out for this release considering how offensive the term is. 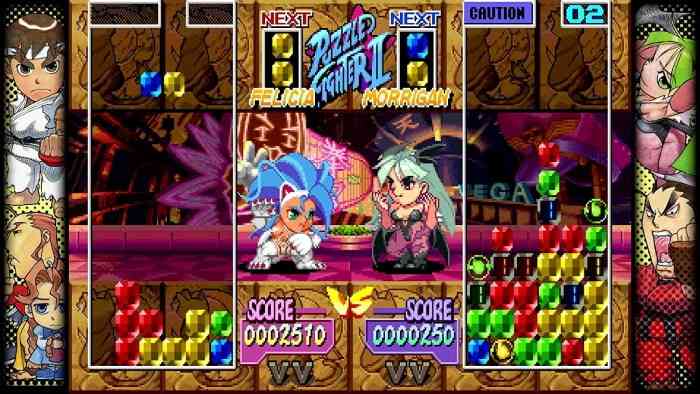 The Capcom Fighting Collection is a reminder of a time when Capcom was the king of making fighting games. It’s great to finally have the opportunity to enjoy the entire Darkstalkers franchise. It would be a damn shame if Capcom didn’t follow this release up with a brand new Darkstalkers installment. While I would have preferred updated visuals, the gameplay for the most part still holds up today. I hope Capcom adds the ability to quick save in each game individually, as opposed to a shared quick save among all 10 games. While this collection only features a small fraction of the fighting games Capcom has released, it’s still a worthy release and I imagine most fighting fans will want to add it to their collection. 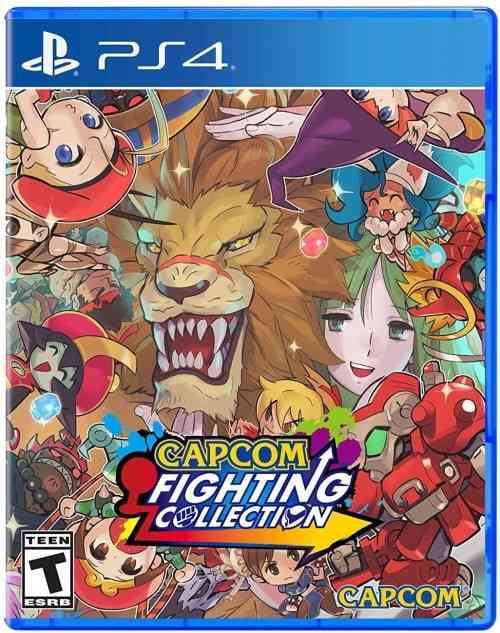