World of Mechs, on Meta Quest 2 from developers Studio 369, puts you in the cockpit of a 10-ton giant armoured mech, in arcade-style combat. Who hasn’t seen a movie like Pacific Rim and dreamed of taking part in some Kaiju-battle action? You pilot your mech in online squad-based battles against other people or AI enemies, firing lasers and missiles while using your wits to avoid getting destroyed yourself. Despite some issues, the basic concept works, and it’s pretty fun. And trust me, it’s even more fun in 360-degree, 3D VR.

It’s an easy game to pick up and play. There’s a Tutorial but you don’t really need one. The basics are very intuitive. Your mech has a rapid-fire laser gun, a missile, and a Special Ability. You aim by simply moving your head. You walk (slowly) by pushing the left stick. If you want to sprint, hold down the left stick. I must say the developers nailed the controls in World of Mechs. It feels natural and easy right off the bat. This isn’t rocket science — it’s a robot fight and there’s stuff to blow up.

You have a few game modes to choose from. There’s a Campaign, online Multiplayer, and Single Player with Bots. The Campaign isn’t bad. It’s a series of levels where you and your AI team try to achieve objectives against an enemy team. There’s a light story element, but mostly that’s just a set-up for the action of each level. It has some decent voice acting but levels recycle the same 5 maps. Despite having different objectives each time, the repetition of environments over the Campaign’s 20 levels kills the fun somewhat. At least you earn cash and XP to upgrade and unlock up to 32 Mechs over 8 classes.

Multiplayer is more fun, but it has the familiar issue of too few human players. There’s also no Lobby system so you can only choose Quick Play to get into a match. There are 4 game modes, but the most frequent match mode I played was Capture the Flag with three capture points. It delivered on the fun, with lots of fast-paced action as I tried to take and hold Capture points and hold off enemy counter-fire. Even with the lack of map variety, these matches are a blast — when you can find a full group of fellow human players. 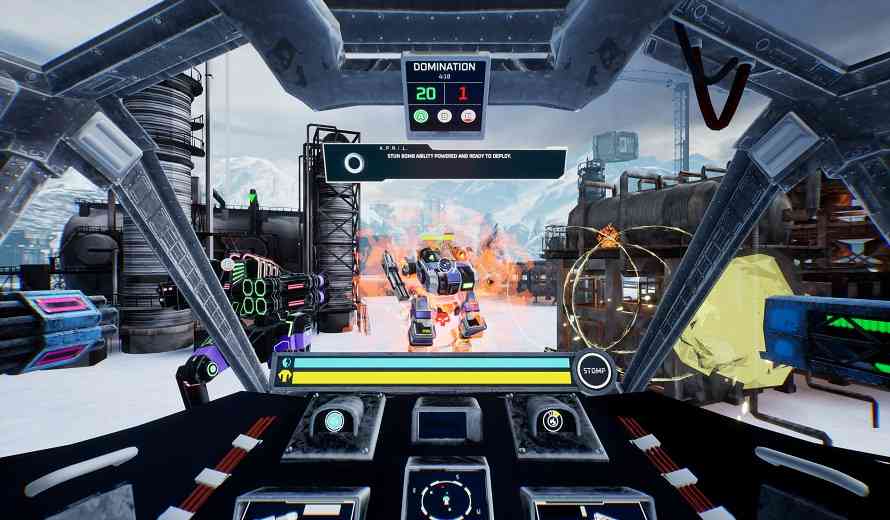 Having said that, World of Mechs feels a bit basic, or incomplete in some ways. I’ve already mentioned the lack of map variety. Even within maps, environments are visually simplistic and last-gen. The so-called “city blocks” you’re supposedly battling amongst are very toy-like, and lack detail. You can’t interact with or blow up buildings. You never get the feeling that you’re having a giant mech battle in a real downtown core. It’s more like a small laser-tag arena, with artificial trees and backdrops.

Still Work to Do

The systems feel too basic as well. There are currently no Leaderboards. And the upgrading system feels overly simple and unsatisfying. You can upgrade your armor and guns, but the options are limited. There isn’t much to buy at the moment. And only one upgrade can be activated at a time per part. So that means you have to keep going into the Menu and deciding which one to activate. Each one seems to have pros and cons — new upgrades aren’t necessarily better but just different. I suppose that makes for customization but I eventually stopped unlocking new upgrades, knowing that new ones wouldn’t be a step up from what I already had.

The bottom line here is, World of Mechs is a good game that feels a bit unfinished right now. In fairness, the devs have made it clear they’re committed to fleshing out the game in the coming year. Leaderboards are apparently coming in Quarter 3. And they’ve also promised Tournaments and Parties which will no doubt improve things a lot. But in the meantime, just know that it’s a work in progress at the moment.

World of Mechs has the basics down. It’s a fun mech battle VR game that’s got 20-plus hours of fun to offer, especially if you get into the online component. It’s got intuitive, simple controls and the battle mechanics are sound. There’s a lack of depth right now, and there are still a lot of new maps, details and system tweaks that need to be addressed in order to make this a complete experience. But even so, at $20.00 US this is a VR experience that’s worth your time and money.

MOTHERGUNSHIP: FORGE Lets You Choose How You Want to Die
Next Capcom Fighting Collection Review – Shining a Light on Darkstalkers
Previous Frozenheim Review – We Built This City on Rocks and Soil