If you’ve played the original or the Remastered version already, you know that Burnout Paradise is so much more than just a car-racing game. It was truly revolutionary in its time, bringing a new open-world depth to the traditional one-note racing experience. You’ve got the expansive urban environment of Paradise City to play in, sandbox-style, competing in races, upgrading your car roster, getting your rides fixed, and even just driving around exploring. There’s shockingly little explicit structure to the experience – no Tutorial, no Story Mode. You start up the game and right away, you’re in a car, and the world is your highway.

Get Your Motor Runnin’

The freedom is really refreshing. You can just choose to drive your car without doing anything else if you want, admiring Paradise City and enjoying Burnout Paradise Remastered’s near-perfect driving experience. But if you want more, it’s there in the form of driving events placed as markers all over the map, mostly at intersections. Taking part in the events is as easy as pressing the Accelerator and Brake buttons (ZL and ZR) simultaneously. Before you can say “Start Your Engines,” the event begins and it’s go-time without really any loading time. For a high-octane game, it’s strangely laid-back and even relaxing.

In a race, though, Burnout Paradise Remastered is pure distilled, chaotic fun on four wheels (or two, if you choose a bike). From the moment your muscle car rumbles to life and you hear the satisfying squeal of the tires tearing up the pavement, you know this is a racing game that’s been fine-tuned to well-oiled perfection. Despite being virtual, the cars have a palpable sense of weight, and the controls are responsive yet not overly-sensitive. Perfecting your use of the brake and gas pedal can result in some beautiful drifts around Paradise City’s corners. The city’s roads are optimally laid out for racing as well, with a good balance of curvy bits with long straightaways for those who want the rush of insane speed. 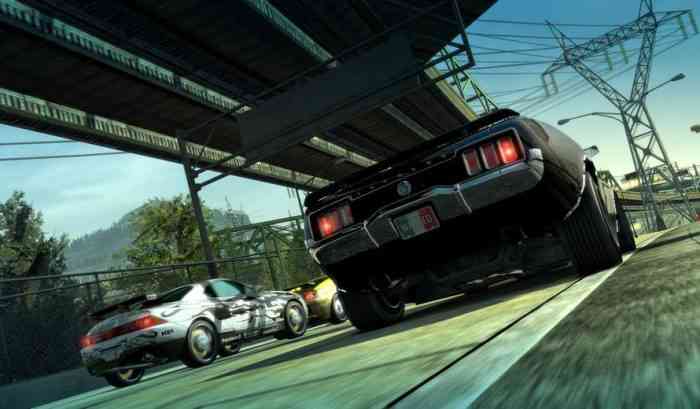 There’s also a nice balance of realism with arcade-y accessibility. You take damage when you collide with other cars or barriers, but it’s a forgiving system that allows you to still go full-throttle until things get really critical. Then, fixing your car is as simple as driving through a Mechanic shop and you’re good to go again. If you go head-on into, say, a wall, you of course get wrecked but you’re put right back into the race with a small delay, so one mistake doesn’t cost you a whole race. No matter the mode or the race, I always felt challenged without being overwhelmed.

I was surprised at how much I enjoyed just racing in Burnout Paradise Remastered. But there are other modes as well to spice things up. One of my favorites was Road Rage, where you have to take out the other drivers by running them off the road. Imagine a race but with fighting elements thrown in and you can imagine the adrenaline rush when you knock an opponent out of the race. The Marked Man event is also a thrill – it’s like Road Rage, but with you as the target car and every other car looking to take you out. There’s many more modes based on the basic car racing experience, but they add lots of extra addictive excitement.

Head Out on the Highway

Online modes take things to yet another level of fun. Hit Right on the Switch D-Pad and the Easy Drive menu gives you access to a host of PVP racing challenges. There’s a decent population already online, and testing my skills against humans gave me some of the best moments playing Burnout Paradise Remastered. I liked how things feel balanced between players; the fact that everyone is on the same level made me feel like I always had a fighting chance to win an online race. This is one game where I didn’t feel always totally outclassed against maxed out human opponents.

So yeah, the racing’s a blast. Aside from that, you can also have fun finding all the shortcuts in Paradise City, or doing stunts like super jumps off ramps. Despite the lack of structure, there’s definitely lots to do in Burnout Paradise Remastered. Mind you, I sometimes wished it had a fast-travel mechanic, as races often sent me way out to the boonies, only to have to drive back for 10 to 15 minutes to find another marker. And I must say I sometimes wished for more depth, like some kind of a Story Mode to give some focus to all the chaos, and maybe the ability to upgrade my cars more. As fun as it is, this is an experience that lends itself to a casual playing approach – pick it up, have a few races and put it down. I didn’t feel like I wanted to sit down and play it for hours on end.

As a port, Burnout Paradise Remastered is no Forza but it looks crisp on the Switch, delivering 720p in handheld mode, 900p docked and crucially, a consistent 60 FPS. For the price, you get the entire game along with the DLC including Big Surf Island, an extra urban environment to check out. Plus there’s those bitchin’ tunes blasting on the radio — admittedly, Guns and Roses and Avril Lavigne are getting a bit old but hey, I’m a sucker for the classics. At $49.99 US, the price is a bit steep considering this is not a new game, but there is probably no better car racing experience on the Switch right now. It may be pretty loose and free in its presentation, but there’s no shortage of fun to be had in Paradise City. When the rubber hits the road, Burnout Paradise Remastered on the Switch has what it takes under the hood. 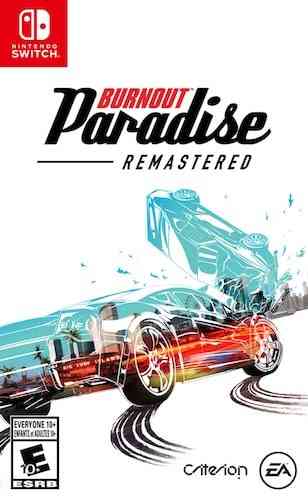 
Microsoft Is Quietly Re-listing Old Xbox Games on Xbox One

The Original Burnout Paradise Servers Are Shutting Down in August

EA Details What’s Coming to EA Access This Month
Next Iron Man VR Review – Strap In and Save the Day
Previous Edna & Harvey: The Breakout Anniversary Edition Review – Clean Coat of Paint on a Classic