My history with point-and-click games is sparse, beginning with Blazing Dragons for the PS1 way back in 1996 and my favorite title in the genre is a recent addition, Thimbleweed Park, which released in 2017. With this context in mind, somehow Edna & Harvey: The Breakout flew under the radar for me when it released for PC and mobile but I’m glad to have experienced the quirky characters and often difficult puzzles. While the comedy of Edna & Harvey: The Breakout seems centred on adults during the dialogue segments that are brilliantly voiced but when Edna is narrating or talking with Harvey, it seems tailor made for kids.

A wise man once said that beauty is in the eye of the beholder and Edna’s perspective on life makes some of the most mundane objects appear beautiful. Edna & Harvey: The Breakout is about Edna trying to escape from a mental institution with her stuffed rabbit, Harvey. The adventure begins with Edna locked in a cell, with a guard at the door who has an affinity for mini-golf and issues with his father. To escape, Edna and Harvey must both travel through time using the recesses of their minds to remember certain helpful techniques. In exploring the institution, Edna meets several other quirky characters who are locked up alongside her, one who thinks he’s a superhero that uses a coat hanger to hear cosmic messages and another who repeats his nickname in the same way a Pokemon does. 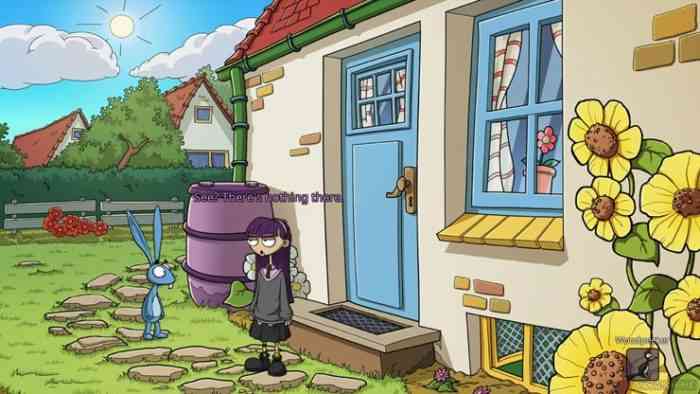 Many objects in the environment can be interacted with, just like any other version of this game, with Edna bringing her character to each of the various ways she can interact with things. Just like every other version of this game, Most object interactions are broken down into four choices which are “take”, “use”, “look” and “chat.” It’s essential to interact with everything because it could unlock the ability to do something else that is key to getting out of the institution. Even the smallest items play a role, so one of the key things to keep in mind when exploring the big house is to leave no stone unturned. For example, I was positive that a telepathically communicating brain would be key to thwarting a guard but it turned out that a book placed atop a small column was the secret to sneaking by him. This game has several examples of distractions placed around the levels such as this to keep the game from being too predictable. While the first puzzles seem easy, the game quickly gets more difficult as Edna explores the institution beyond her padded cell. As Edna explores, she discovers more repressed memories of the location, certain people and random objects that hold some sort of meaning to her. My biggest issues with Edna & Harvey: The Breakout involve either overthinking or underthinking a puzzle. Sometimes I’m thinking several steps ahead of where I should be and other puzzles have me completely clueless. This varying difficulty will make you think the game is too easy one moment and too hard the next, making it a less predictable experience than most point-and-click adventures. Simply doing something out of sequence will prevent you from proceeding so an attention to detail and being able to think step by step are key to The Breakout.

The Breakout is Like Dr. Marcel’s Home For Imaginary Friends

Though it may not appear that impressive to the uninitiated, Edna & Harvey: The Breakout – Anniversary Edition is a significant visual upgrade to the original and the visuals aren’t downgraded when playing in handheld mode, nor is the frame rate hindered. The cartoony visuals make this seamless transition possible and the Nintendo Switch is a great way to play this game. One of the biggest missed opportunities in the Nintendo Switch version of Edna & Harvey: The Breakout – Anniversary Edition is the lack of touch controls that could’ve transitioned from the mobile version of the game. While it feels like you should be able to touch the items in an environment to interact with them or touch items in the menu to use them, this is sadly a missing feature. I’m not sure if input changes as big as touch controls can be patched into the game but I definitely think that the game would benefit by having some level of touch controls on the go. Considering it’s a point-and-click, I’d like the ability to point and click on the touchscreen that allows gamers to point-and-click. 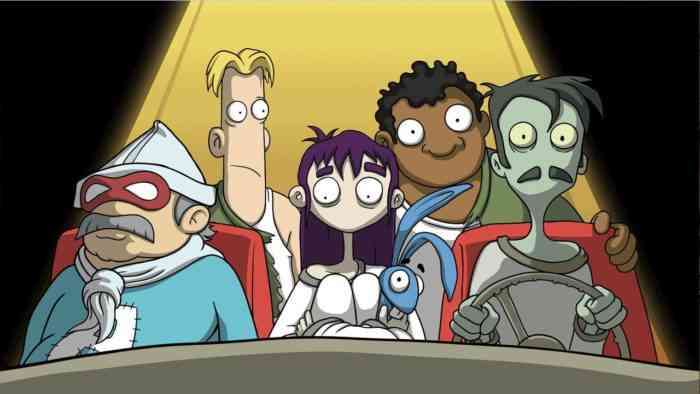 Edna and Harvey Will Help You Workout Those Brain Muscles

Edna & Harvey: The Breakout – Anniversary Edition is a very competent point-and-click adventure to play if you like some laughs alongside frustration. The quirky characters are the best part of this game and the voice acting is superb and helps with immersion. While some of the sound effects and ambient noise leave much to be desired, the voice acting makes playing this game with volume essential. The Breakout has jokes in dialogue that lead me to believe the game is made for adults, including Easter eggs from Futurama, Simpsons, etc. Edna’s perspective on life, however, seems like it’s made for a younger audience, but I’m not sure that the point-and-click genre is popular with kids these days. Thimbleweed Park does more to focus on an older audience who grew up with the genre but Edna & Harvey: The Breakout – Anniversary Edition looks to keep the genre alive with the next generation of gamers. The characters of this game ooze personality and are the best part of escaping the mental hospital. The environments look better than ever thanks to the updated visuals in this re-release and Edna looks less wild and more like a confused young girl. The pace of this point-and-click adventure is a little slow and it would benefit from a faster mode such as the x3 mode in recent Final Fantasy ports but as it stands, you’ll need to slowly navigate around the quirky world that Daedalic Entertainment has crafted. The lack of touch controls truly hinders this great Anniversary Edition from being an essential point-and-click adventure considering the fact that it released on mobile long before it released for the Nintendo Switch. 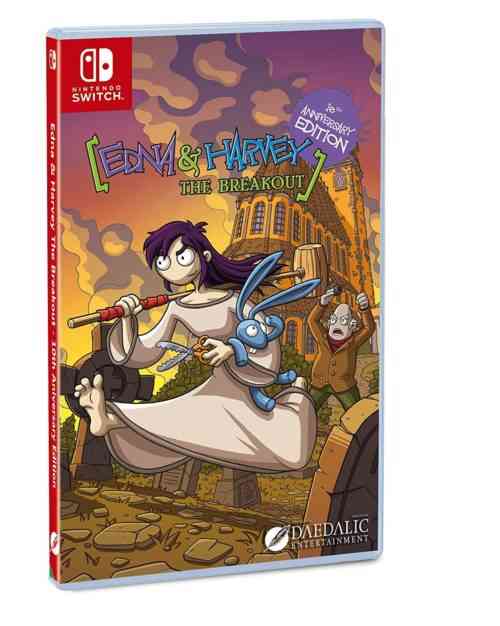