Has this ever happened to you? On a whim, you try out a silly little cell phone game but because it features characters you like, you can’t stop playing? The game itself is OKAY, but it is full of Star Wars characters or DC superheroes or WWE wrestlers or something, so you gotta collect ’em all. And the more obscure the obsession, the more you get dragged into the game! That’s probably got something to do with the very real affection I feel for Sentinels of Freedom, the new game from the Sentinels Multiverse!

Oh wait, maybe you’ve never heard of the Sentinels Multiverse. I wouldn’t blame you. But let me get you up to speed. Sentinels of the Multiverse is a cooperative superhero card game in which each player is a superhero, and they work together to defeat a villain, represented by a deck that plays itself. The cards feature artwork and quotes from the Sentinel comics, complete with citations to specific issues. A podcast called The Letters Page takes you through the lore, trivia, and minutia of this superhero universe. The thing is, none of it is real. It’s an imaginary story. Well, all stories are imaginary, but this one is more imaginary than most. 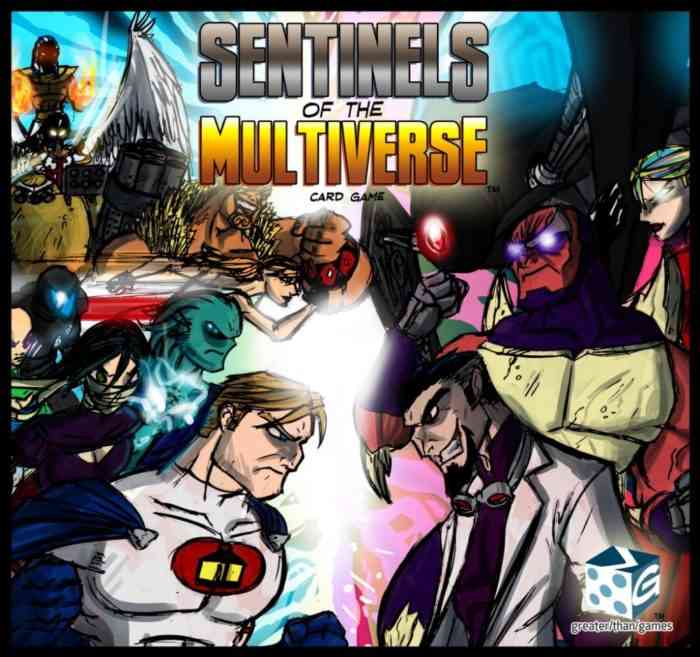 That’s because there have never been Sentinel Comics. It’s all a very well realized world that leans on the behind the scenes drama that happens in real comics publishing. Take for example the character Unity, who is playable in the Sentinels of Freedom video game. As the story goes, Unity was originally introduced as the kid sidekick on the short-lived Sentinels cartoon in the 90s. She spouted weird catchphrases and was pretty annoying. But in the 2000s, a miniseries introduced her to the comics, gave her a fleshed out backstory, and she became a fan favorite. In the video game, you can use her to psychically control robot dinosaurs, which is pretty fun.

Okay, so the video game Sentinels of Freedom is a turn based strategy game. You make your own superhero, who joins the characters from the card game. By spending AP, you navigate your characters around the map and then use superpowers to take out the bad guys. All of it is played very similarly to a cult-classic PC game from the early 00s: Freedom Force (though Freedom Force was real-time-with-pause and Sentinels of Freedom is strictly turn-based). As with that game, the story plays out through colorful comic book-style cutscenes, and the world is filled with ambient sound bubbles and other comic book trappings. I dig it. 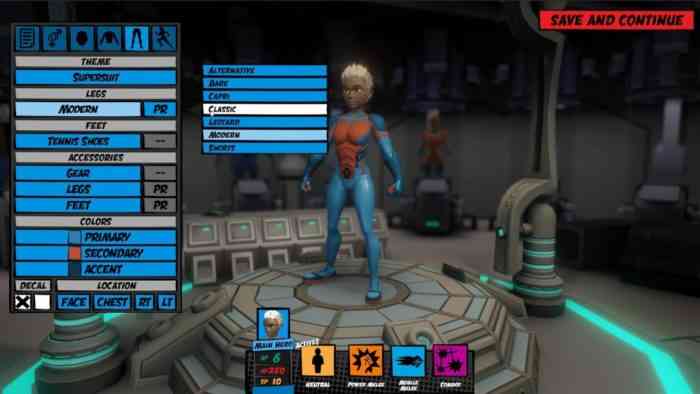 The rules of Sentinels of Freedom are deceptively complex. As in the card game, there are tons of damage tags such as projectile, toxic, sonic, or infernal damage. Each character also has multiple defense stats, which can block different types of damage. A super-fast character may be good at dodging projectiles. A heavily armored character may have a stat that allows them to block fire damage. Heroes can also adjust their stance, giving them different movesets and stats.

On the one hand, I really value that complexity. Superheroes are harder to balance than fantasy warriors or starship smugglers. You may build a team with Unity (who can build robot dinosaurs), Bunker (who is in a bulky metal suit), and Tachyon (who can run at lightspeed). The game has to be designed in such a way that all of those heroes feel powerful- but not in the same ways. The complexity really helps with that. There are lots of options, and lots of cool combinations to create and discover.

Dancing With the Devil in the Pale Moonlight

Sounds pretty promising, no? I’ve certainly been enjoying it. But not everything is perfect in Megaopolis. There’s the graphical style for one. I’m by no means a snob for high resolution textures or anything like that, but the graphical style in Sentinels of the Multiverse isn’t pretty to look out. The character models look like they have pretty low polygon counts. It’s not quite N64 levels, but it’s not much better than Gamecube. This feels like a real missed opportunity too. It wouldn’t take a lot of processing power for a cleaner, more comic book inspired art style, particularly one modeled after the style of the card game artist Adam Rebottaro. The 3D models can’t be all that they should be, and that’s a shame. 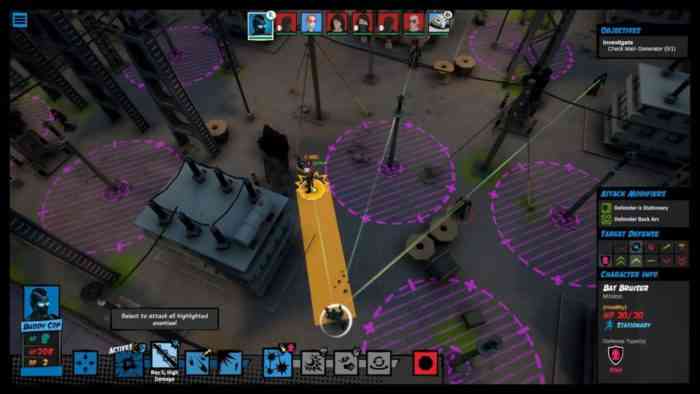 The graphical whiff doesn’t just end with the models. All of the presentation is a little questionable. The dev team really should consult with a user interface specialist. Little choices like the font, the backgrounds, and the text boxes are hard to read and aesthetically hard on the eyes. It’s again a shame, because there is so much style to draw on in the source material.

But what is truly befuddling is the place where the game does lean hard into the genre trappings. Like, remember when I was praising the complicated defense stats? Despite me loving the concept, they are in practice, impossible to parse. Every defense stat is named for a silly comic book sound effect, then given a color and a symbol. But in truth, it’s too confusing and abstract. Does Skrrzat block Pow? Or do I need to level up my Grit? And how do I deal with all this Fwoom?

Time For Some Truth and Justice

There is some amount of jankiness I will gladly accept from an indie game. And Underbite Games are definitely indie. They scored this license with one completed game in their library, Super Dungeon Tactics. I don’t think the Sentinels license is the hottest property around so I’ve gotta figure that they really wanted it. This game is a passion project. And that really shows! It’s like soul food, you can taste the love. This is a game by a scrappy developer. It’s got a lot of heart, and a lot of good ideas. And I’ve been playing the hell out of it. 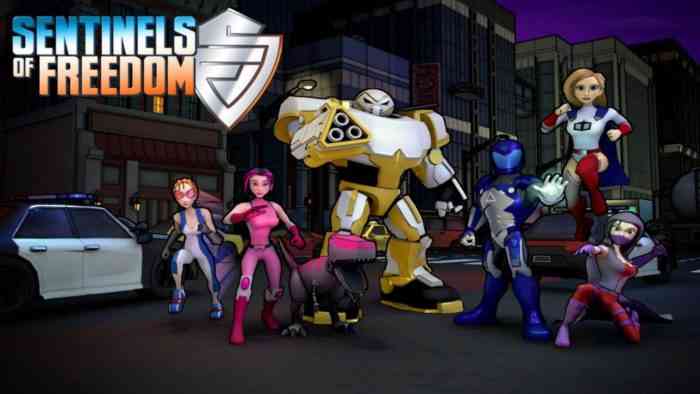 Because despite my frustration with many elements of the game, it really does make me smile. And that’s probably because… I really love this universe. In a media landscape drenched in superhero stuff, Sentinels manages to feel really unique. I care enough about the mythology that I got very excited to go on a mission to stop Fright Train from robbing banks. His puns were atrocious (I loved them), and his rivalry with the hero Bunker was palpable. And Bunker is rather close with his teammates Wraith and Tachyon so that led to interesting dynamics where… the characters are good. The writing is often good. The world is extraordinary.

I unfortunately can’t recommend Sentinels of Freedom as an introduction to that world. If you’ve got the money and a group of friends, maybe try to original card game, Sentinels of the Multiverse. Or if you are more into digital games (and you’re here aren’t you?) you would do well to try out the excellent video game version from Handelabra Games. There’s also the official podcast, which is a gas. But I’ll be honest with you, I’m really hoping you come back and play Sentinels of Freedom. Because despite the unappealing looks, this is a really fun way to explore the Sentinels universe and I hope you’ll come back and play this. There’s an ineffable alchemy at the heart of Sentinels of Freedom, one that goes beyond scores and polygon counts. If you invest the time, maybe you’ll learn to love this troubled little game as I have. 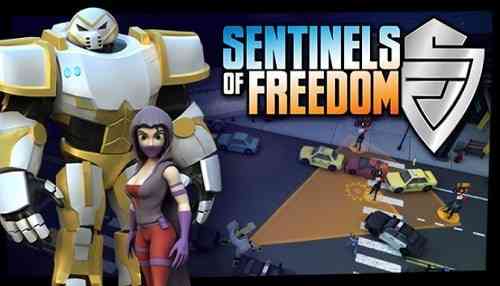 Spider-Man: Miles Morales Video Review – Next Gen Spidey is Exactly What I Need

Marvel’s Avengers Has Been Awful for Square Enix
Next Edna & Harvey: The Breakout Anniversary Edition Review – Clean Coat of Paint on a Classic
Previous Sennheiser GSP 300 Gaming Headset Review – A Gift For Your Ears