Point and click adventure games have been around for a long time. I remember playing them back in the early 90’s with classics like Kings Quest, Space Quest and of course Monkey Island. As touch input has become more accepted with modern tablets and smartphones, these games are once again experiencing a renaissance.

So let me introduce you to Edna & Harvey: The Break Out, which was first released back in early 2011 for the PC. The game stars Edna and her stuffed rabbit pal Harvey, who seem to be locked up in an insane asylum for unknown reasons. Poor Edna has lost her memory and most of her sanity. With the help of her rabbit friend who has a personality all his own, they seek to escape the asylum and the doctor who put her there.  This is the same doctor who wants to keep her locked up at all costs. 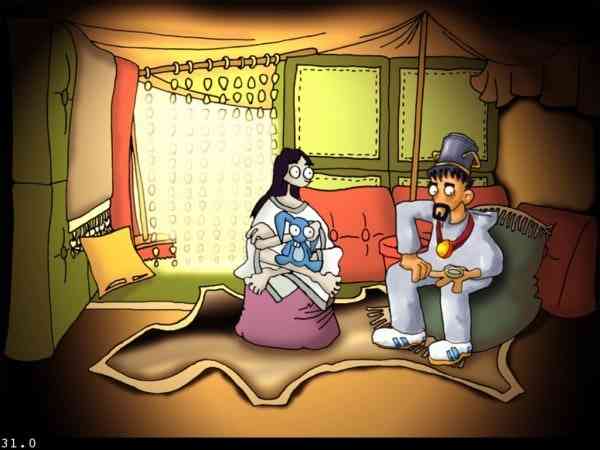 To start things off the game lets you choose to have English or German voice-overs (the game was developed by a German studio). You are also able to choose subtitles in English, German or French, which is a nice touch. You guide Edna around with a simple tap to where you want her to walk. Interacting with objects is just as simple but not perfect. I found myself sometimes tapping multiple times in order to get the object or person to respond. Most object interactions are broken down into four choices which are “take”, “use”, “look”, and “chat”. A very amusing thing is how Edna seems to give almost all objects their own personalities when using the chat option to talk to it.

When chatting with other characters in the game you are given a conversation tree of sorts on how to respond to the person or thing you are trying to interact with. This came with a lot of trial and error to advance the story, but it was still amusing enough not to get bored hearing some of the same lines repeatedly. Edna’s stuffed rabbit, Harvey, is there to help guide you through your quest and give you hints from time to time. He also sends you into flashbacks of your past to give you even more clues on how to solve puzzles in the current time and place. You will be picking up items as you go and your inventory can grow quite large, but it is easy to manage. To use an item just open your inventory, tap on the item you want to equip. Once it is equipped, just drag it to the spot you want it to interact with.

Worried about getting stuck on an obscure puzzle these point and click adventures are known for?  Well I have to say that some of the puzzles are tough, but not so “out there” that it will have you pulling your hair out. Also, a button on the screen will briefly highlight all objects on the screen which you can interact with. I do admit I had to rely on that feature a few times so I could progress, shaking my head on how I could have missed the item in question in the first place. 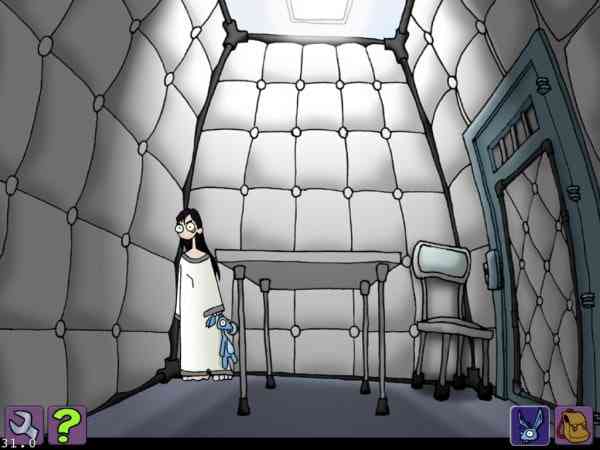 As you progress through the game you can unlock certain achievements and brag about them on Facebook. I’ve personally never really understood this feature, other than bragging about what you’re playing to others and promoting the game; but the option is there.

The art style of the game is somewhere between a happy version of a Tim Burton movie and a Saturday morning cartoon. It’s enjoyable enough to not get boring to look at, but not so over-the-top twisted that it hurts the mind. Animations of the characters and objects you interact with are fairly good, but not as smooth compared to other point and click adventures I’ve played in the past. Backgrounds are adequate but very static.  I would have enjoyed seeing a bit more life in them.

The voice acting in the game is well done and very professional sounding. Each voice fits the character or the object well and makes you eager to see what they will say next. Ambient music is nice when it’s there, but it can be very quiet or non-existent at times. Interaction with objects in the world are represented well with good samples for each, but nothing special. The real draw for the game is the voice work, which made the game for me.

Edna & Harvey is a great investment for any fan of the point and click genre as the game offers over 20 hours of gameplay for just $5.99 in the App Store. It does not bring anything truly new to the table in terms of gameplay, and the interface can be a tad finicky, but the clever writing alone should be enough to keep you coming back for more.