It took five minutes for Thimbleweed Park to transport me back to my childhood. The blocky character models, the list of action verbs plastered on the bottom screen — I didn’t expect it to be so instant. There I was, sitting in front of the family’s PC, my older brother beside me, staring at the Maniac Mansion logo etched across the dusty screen. Despite its comedic nature, Maniac Mansion used to scare me and the only way I could get through it was playing it alongside my brother. Flash-forward to 2017 and not long after wrapping up the opening prologue, I knew I had to call my brother up — who has long since left his gaming habits behind — and have him come over to experience it with me. Not long after, there I was, my older brother beside me, staring at the Thimbleweed Park logo etched across my flat screen TV. We were immediately gushing over the pixel art, puzzles, offbeat characters, and humour. It hit home really hard, probably more so than any independent game vying for the nostalgic crowd. Truth is, I wouldn’t have expected anything less from Ron Gilbert and Gary Winnick, the makers of Maniac Mansion and The Secret of Monkey Island, the so-called pioneers of the genre. It’s safe to say that they’ve done it again because Thimbleweed Park is the perfect love letter to anyone that fell in love with the genre all those years ago.

It’s clear from the first few hours of Thimbleweed Park that its sole intention was to make a point-and-click adventure game for the diehard fans. It is chock-full of references and callbacks to past games, some clever and subtle, while some are in-your-face and unabashedly fourth-wall breaking. One moment I’d be mesmerized by solving a puzzle due to my knowledge of old-school adventure games. Other times, I’d shake my head in baffled amusement over a character’s passion to be a game designer (of adventure games no less) working for a company known as MucusFlem (get it?). Yes, it can be a little on-the-nose, but Thimbleweed Park’s charm always won me over, and the engaging story kept me pushing on.

It isn’t all about inside gags and homages to a long-lost genre. No, Thimbleweed Park actually has a pretty interesting story to boot and it took me down some wild and unpredictable routes that brought a contemporary quality to the overall package. It all starts with a murder that is being investigated by two FBI agents, both of whom are controlled by the player and who have some secrets of their own. Any callbacks to 90’s TV greats Twin Peaks and The X-Files are, you guessed it, entirely intentional. The story may initially start out rather simple, but eventually it twists and turns into unexpected places, allowing a slew of playable oddball characters into the limelight including a potty mouth clown, the aforementioned game developer, and even a ghost.

“Thimbleweed Park holds the classic point-and-click adventure rule book so tightly to its chest that some of the genre fundamentals that worked in the 80’s and 90’s may come off as cumbersome to some.”

Playing as multiple characters is something of a staple for anyone who’s played Maniac Mansion before, and I’m happy with the way it’s handled here too. Controlling characters requires using the on-screen verbs in conjunction with various items and objects. For instance, using the Open or Push commands on a door will move your character over to the door to either open or push it to advance. There are more complex variations too that involve multiple items. Photographing a body means having a functioning camera, but it needs to have camera tape installed first.  This string of commands means selecting the camera tape and using it on the camera before clicking on the body to snap a picture. Point-and-click aficionados will naturally feel right at home with this setup, while newcomers may find it a bit tedious, specifically those playing it on console. Thankfully, some minor changes to the interface — while not always perfect — help speed things along. Moving the cursor on top of an item of interest will highlight the most likely verb coinciding with it, meaning simple actions like opening doors only needed a single button press instead of two. Of course, this doesn’t always work but it is a welcome addition when I wasn’t in the middle of a mind-bending puzzle. 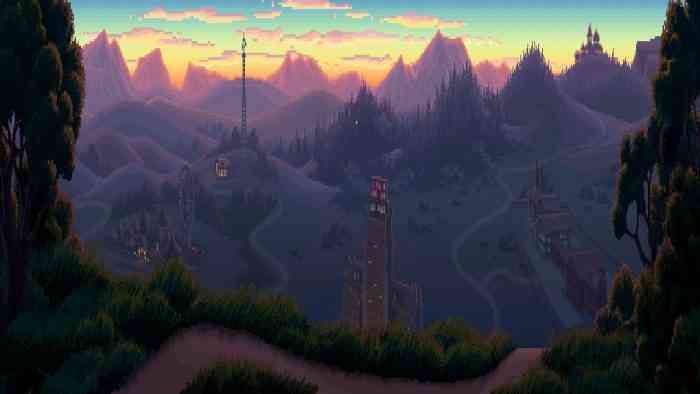 Speaking of puzzles, there are plenty and each of them satisfying, weird, and perfectly reminiscent of the genre. Thimbleweed Park has two modes of difficulty at its offset, casual and hard, that determine how hard and how any puzzles there are in your playthrough. If I may, please ignore casual altogether and jump straight into hard. Casual literally cuts out nearly half of the puzzles in the game, but doesn’t omit the items needed that would’ve been used to solve in hard mode. That means casual players will probably pick up items that have no use, which may cause more confusion than anything. If you’re new to the genre and are in it just for the story and characters then I suppose casual mode isn’t a terrible waste of time, but hard mode is the true complete adventure with everything intact, so why not start there?

“Thimbleweed Park is the perfect love letter to anyone that fell in love with the genre all those years ago.”

The puzzles are the real star here though. I found them to be the perfect mix of realistic logic to forcing me to think outside of the box. There are some definite head scratchers but every time I was stumped it was usually because I failed to pick up an item or that I wasn’t seeing the bigger picture. Some puzzles require switching to various characters to find the solution, which is as simple as clicking in the right trigger. This mechanic means I had the freedom to solve a different puzzle with a different character if I was ever stuck. Thimbleweed Park’s leaps in puzzle logic feel right in line with the world around it, and I never found myself stuck on a puzzle for too long. Having said that, I have to wonder whether my past experiences with adventure games of this sort gave me the necessary skills to plow through Thimbleweed Park with relative ease.

Thimbleweed Park is probably best enjoyed by those that grew up playing point-and-click adventure games. I knew before going in what was awaiting me, and it truly took me back to those early days playing Maniac Mansion, The Secret of Monkey Island and its sequel in my basement. That isn’t to say that those unfamiliar with the genre won’t get any enjoyment whatsoever here, but it is clearly marketed to people in similar shoes as me. This project would never have seen the light of day if it wasn’t for the diehard fans that helped fund it on Kickstarter.

Thimbleweed Park holds the classic point-and-click adventure rule book so tightly to its chest that some of the genre fundamentals that worked in the 80’s and 90’s may come off as cumbersome to some. But that wasn’t ever a problem for me, and I allowed the nostalgia to wash over me. Newcomers are very much welcome, but its design may turn you off if you’re expecting a more intuitive control scheme. But as someone who’s been craving for another adventure game for nearly 20 years, Thimbleweed Park is, indeed, the perfect comfort food. 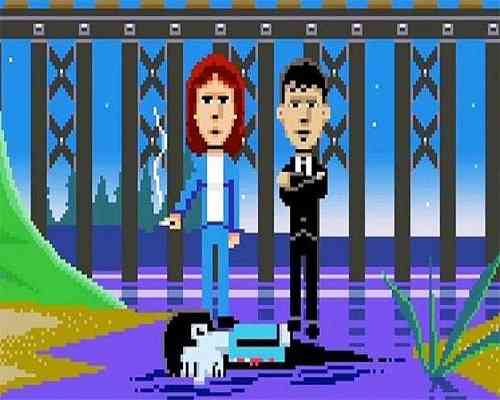