You play a diver on a mission gone awry. Your task is simple: stay alive and finish the mission. Items are scattered throughout the levels that refill oxygen and energy. Certain plants also need to be collected in order to progress. Anoxemia’s story is told in comic panels and your characters’ out-loud musings. You’re alone down there, with no one to hear you talk but your probe. One of the many things I’m not sure about is whether said probe talks back or you’re just imagining it. I also took several stages to figure out which items replenished oxygen and which ones gave back energy. Due to the interchangeable appearance of several key objects, I spent a long time just clicking on things and hoping my levels rose. Even now, I’m not totally sure which items do which. The story is doled out in tiny amounts through the aforementioned comic panel cutscenes. I quickly pushed it aside, my vision tunneled down to each successive stage and its challenges.

Underwater levels are incredibly polarizing among gamers. They’re a difficulty spike that makes dry land a blessing from the gods. They’re a peaceful interlude with beautiful music. They’re a chance for designers to show off their skills with some gorgeous environments. This game throws all of that out the window. Anoxemia makes the ocean depths feel small, dark and merciless. You’re immediately presented with two timers, both of which are counting down. One is for oxygen, one is for energy. These timers are designed to make every second count. The system worked on me, at first. I could feel the pressure from all sides as I hunted for more items to extend my remaining time. The levels on both systems carry over from stage to stage as well, meaning you don’t get any sort of relief from just finishing a level. Eventually, the pressure faded for me. I knew that death would just mean starting the stage over, so the timer no longer felt like a big deal. 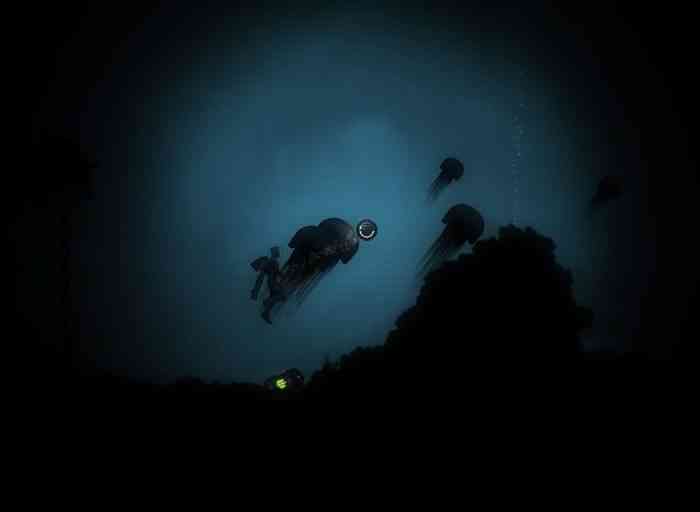 Games have a tradition of changing the controls for underwater segments. You move slower, the inputs are less responsive and often some abilities are blocked from use. Anoxemia simulates the challenge of moving through the deep by dividing control between your character and the drone which accompanies you. The result is a sort of twin-stick system with one of the sticks missing. If that analogy doesn’t make any sense rest assured the controls are equally obfuscating. Button inputs are tied to the position of your avatar, yet movement is based on the path your drone takes through the water. One of the tiny black squares you collect is dynamite, which is placed on appropriate rock walls when you touch them in the right spot. Another move is a harpoon which I never discovered the use for. You can expel some energy or oxygen to dash forward, which sometimes gets obstacles out of your path. The indirect movement system is a nightmare to work with anytime you’re being pursued by enemies or time limits. There were multiple moments when I was a minute away from suffocating and trapped behind a wall I couldn’t clearly make out due to the deep darkness covering most stages. The other major tool at your disposal is sonar. I found myself spamming the button for it throughout every stage, though I couldn’t tell you what it actually did. Overall I found myself fighting with the controls more than the enemies. While I understand the need for difficult controls in a horror-type play environment, Anoxemia doesn’t feel scary enough to justify this. What comes across the clearest is inconvenience, rather than fear.

“Anoxemia’s intended atmosphere is one of horror, yet I mostly felt annoyed.”

At first, I was fighting with the attack subs. One would approach and eviscerate me while I was trying to navigate a corner. Eventually, these gave way to mazes I had to navigate. It was at this point that the darkness became my primary enemy. There was no way to distinguish walls from passages without slowly feeling my way along with the drone. The sonar only points out enemies and specific items. This led me to asphyxiating over and over again with no idea where the exit was. The stages have no obvious exits to speak of. Sometimes you need to get from one side of the stage to the other. Sometimes you had to collect a particular item or items. This was never communicated to me. I just began to notice which events triggered the stage ending. It was the same for the oxygen and energy levels. Only through collecting items and watching which level rose was I able to piece together a relationship between the numbers and my survival.

All of this adds up to an experience it’s difficult to learn from. You can’t improve your next run through the stage because you’re not sure what you did wrong or right. Enemies are clear enough, and the act of you dying is cleanly telegraphed. It’s just all the things you do that remain a mystery. To be fair, your drone does tell you things which could be construed as clues. But this is a matter of interpretation and assumption rather than a matter of fact. Anoxemia’s intended atmosphere is one of horror, yet I mostly felt annoyed. I wasn’t afraid or juiced up with adrenaline, I was just frustrated. If you’re looking for the wonder or the terror of the deep, you may want to look elsewhere. 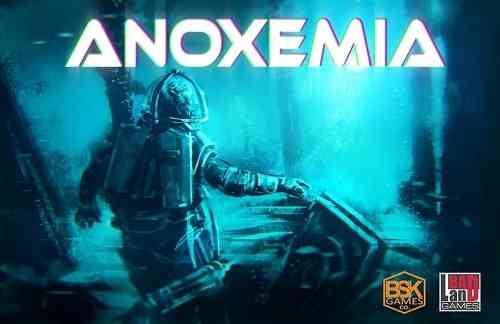