Captain of an elite counter-terrorism squad, betrayed by his commanding officer and abandoned to a nomadic life on the run from the law, with only his crew to rely on; I can hear the collective yawns from this tired and out-dated concept. So how do you make it entertaining? Give it excessive blood, high power explosive weapons, and make the main character an alcoholic mercenary who can’t help but turn everything into a wise crack. Bulletstorm: Full Clip Edition knows exactly what it is and doesn’t take itself too seriously, going easy on the plot and heavy on the outlandish violence and destruction.

Originally developed by People Can Fly back in 2011, Bulletstorm was picked up by Gearbox and has since been remastered with some impressive upgrades. Full Clip Edition features an overhaul to the graphics of all models and environments with a noticeably enhanced frame rate. Although you will still notice the game’s age, it has been enhanced very well for current gen. Coupled with its linear story, intense combat, and shall we say, colorful characters, it makes for a fantastic experience without bogging you down in melodrama.

Players take control of Grayson Hunt, a rogue soldier with a penchant for booze and seriously irking everyone he encounters. Voiced by the fantastically recognizable Steven Blum, Grayson drunkenly leads his crew into a suicide mission for revenge against General Sarrano, who destroyed the lives of Grayson and his men. In the ensuing chaos, Grayson crash lands on an abandoned resort planet only to discover Sarrano, too, impacted on the surface and is awaiting evacuation. With Sarrano being the only means of escaping the planet, Grayson is now tasked with finding and protecting his long-time nemesis if he has any hope of escaping.

“Bulletstorm: Full Clip Edition knows exactly what it is, going easy on the plot and heavy on the outlandish violence and destruction.”

Controls are incredibly simple which is excellent when it comes to Bulletstorm’s “Skillshot” feature. Currency for this game is awarded through the Skillshot system where points are awarded based on the plethora of kills you pull off with everything from interchanged gun and melee combat combos, to environmental kills, to some very specific specialty kills (leash two enemies into the air, kill the second one first, then the first one before they hit the ground, etc). Accumulated points are then spent at periodic resupply pods which allow you to purchase ammo, secondary fire rounds, increase clip size, and select your preferred load-out. The game has a clever way of explaining the Skillshot system in the early chapters of the story which is a great way to rationalize a typical arcade-shooter trope. Combos are a blast to pull off and even in the midst of a severe firefight you can take the time to go for a particularly high-scoring kill and enjoy the carnage. 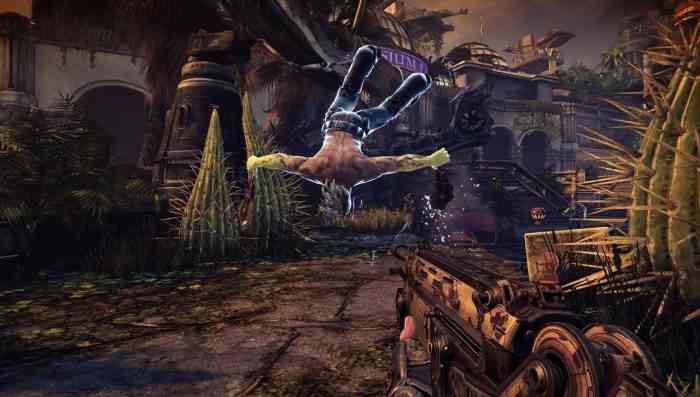 Anyone interested in Bulletstorm should be coming here for the gameplay and not looking for a deep and methodical plot – that simply isn’t here. This game knows exactly what it is and it excels at just that; gruff jokes and excessive violence. It fits very nicely into an experience above Duke Nukem Forever and teeters just below the recent DOOM. In fact, if anyone has reservations about getting into the frantic carnage of DOOM, Bulletstorm: Full Clip Edition is the perfect place to start. The story itself is worth playing through a few times, but Bulletstorm also features co-op online multiplayer combat, including all bonus maps included in the original DLC packs, Gun Sonata and Blood Symphony. These packs combined will offer twelve Multiplayer maps, a new “The Ultimate Echoes” gameplay mode, as well as over thirty Challenge Maps, additional multiplayer levels, and the new Overkill Campaign mode exclusively introduced with the Full Clip Edition. The one sore spot is the lack of a split-screen multiplayer mode. Sitting next to a friend to play would simply be a ton of fun.

“Non-stop, high-octane combat, colorful characters and slick graphics make Bulletstorm:FCE an experience that gore loving gamers can definitely get behind.”

As with most remastered titles, the audio has been upgraded and fine tuned for some nicely improved quality. While the voice acting might not be to everyone’s taste, I definitely got a sense of the surround sound, as I could determine where the next Skull or Creeper was hiding by listening to his mutated groaning. The soundtrack for Bulletstorm appropriately kicks up the pace for high-intensity action but the real detail comes in the sound effects that accompany the deliciously excessive violence. Screams of agony, exploding heads, and explosions of fire add quite a bit to the experience and I found myself enjoying the over the top chain reaction massacres available to players mid game – probably a bit too much. 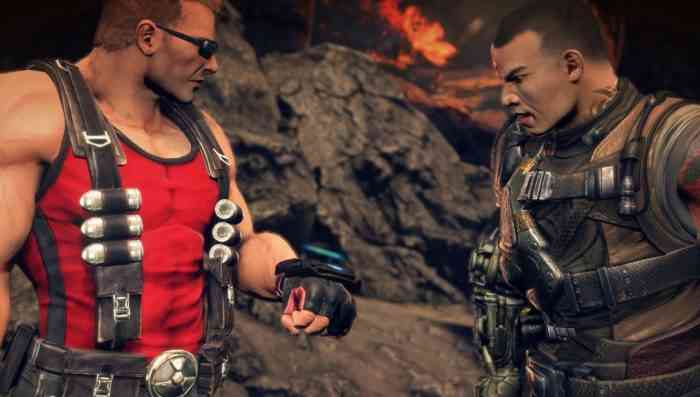 This, of course, brings us to one of the most highly anticipated additions to the game: The Duke himself! Gearbox has introduced DLC to play through Bulletstorm as Duke Nukem: a completely detailed model, voiced by the original Duke, Jon St. John. The DLC – called Duke Nukem’s Bulletstorm Tour – will have players complete the campaign mode as Duke with original voicework and his classic sass. The outlandish gore and inventive weaponry in the game make this a perfect domain for Duke to make an appearance, and I am sure those with less than favorable memories of Duke Nukem’s last outing will see this as a second chance to redeem the big man.

Bulletstorm: Full Clip Edition is a great experience for mature FPS players and is sure to delight. Non-stop, high-octane combat, colorful characters, and slick graphics make it an experience that gore loving gamers can definitely get behind. It carries plenty of co-op multiplayer options, a highly replayable campaign, and some fantastically slick graphical improvements. Adding the Duke Nukem DLC is icing on the cake to what is already a stellar experience. 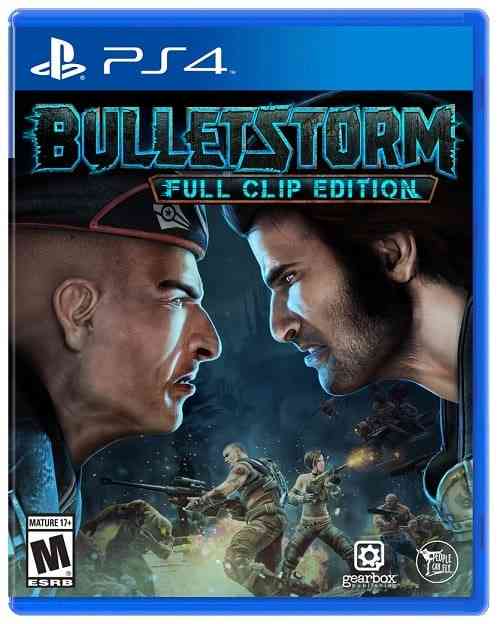