The Nintendo Switch continues to defy the naysayers who doubted it could handle ports of the big AAA games, with some truly big guns like Doom and The Witcher 3, among others, delivering pretty much the full experience on the diminutive handheld, with some minor trade-offs (and some patching). The latest example is the Borderlands Legendary Collection, bringing to the Switch three huge titles in one package: the first Borderlands game along with its sequel, Borderlands 2, and the surprisingly good Pre-Sequel. It’s got content galore, if that is what matters to you — the full games along with all the expansions for each, adding up to hundreds of hours of Borderlands goodness. But this is the Switch, and the biggest question is, how does it run? Well, after playing it, I can tell you it runs just fine. This is a truly impressive game package and another successful AAA port on the Switch.

I won’t go into too much minute detail as to the actual Borderlands games, as those reviews are easy to find. Borderlands is Borderlands — a crazy, fun, chaotic looter shooter series that offers some excellent co-op FPS play, and a surprisingly-deep ongoing story. I’ve always had a ball playing it on various platforms, and the thrill of finally winning a protracted firefight and seeing those bad guys explode into a rain shower of colorful loot-drops never gets old. Despite the at-times cringeworthy writing, I still laugh at some of those cheesy Bandit lines — and I still think about what a shiny meat bicycle might look like. I also still think Skags are possibly the most irritating enemies to ever appear in a game. No, it might not be perfect, but overall Borderlands is just so fun, it’s pure gaming junk food and that is just fine by me. But let’s talk about how well that crazy action translates on the Switch version.

When it comes to porting the game over to the Switch, Borderlands has a distinct advantage over some games in its cel shaded visuals. Without the need for photo-realism in character and environment models, the Switch version looked to my eyes just like the PS4 and Xbox One versions I have played. And the game fulfills the promise of faithful resolution, delivering 1920 x 1080 in the docked mode but also a pretty impressive 1280 x 720 in handheld mode. I continually had to stop and just admire the fact that I was holding a full and faithfully-reproduced version of such an iconic game in the palm of my hands. But as I said in my opening, with each such example I see on the Switch, the less surprised I am. 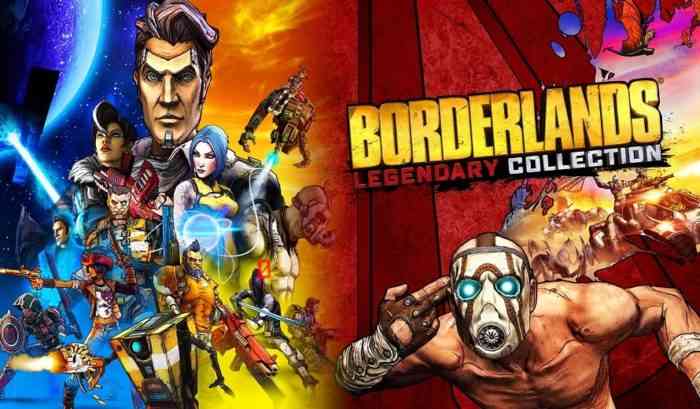 There are a few noticeable trade-offs, of course, but they aren’t a big issue. The frame rate is a good but not ideal 30 FPS. Most of the time, like when I was exploring, or fighting small groups of enemies, I didn’t even care. Especially in handheld mode, the action felt smooth and any small visual flaws did not stand out. In docked mode, on my 60″ TV, I felt the frame rate more, especially moving side to side, and the pop-in of some objects and textures naturally showed up more on a bigger screen. It was never a problem though, and to its credit the game never stuttered for me, even in the thickest large-group firefights. The developers have obviously balanced this port really well so that any visual sacrifices made in order to shoehorn such a gaming behemoth into the little Switch are not all that noticeable.

As I said before of the previous Doom port on the Switch, in Borderlands Legendary Collection there are small, unavoidable physical nitpicks relating to the handheld platform itself. One is text size. On the small screen it can be hard at times to read the games’ tiny words. Luckily, in Borderlands games this isn’t really a problem, unless you really, really need to know the name of that new gun you just picked up. The green and red arrows telling me whether they were better or worse than my current weapon were generally all I needed. But there is also the issue of controlling the game using the Joy Con thumb sticks. In particularly hectic encounters, those little rubber sticks don’t feel up to the task and of course playing with a Pro Controller is ideal, but not always possible on the go. You can even utilize the motion controls of the Joy Cons if you wish, and it actually works pretty well — I just have become too used to using a traditional controller set-up, I guess, so that won’t ever likely be my go-to method.

As for the games you get for your $49.99 US, the Borderlands Legendary Collection is especially perfect for anyone who has not yet experienced the franchise. Going back to the start with Borderlands, you get the whole story of the Vault Hunters as they seek to uncover the secrets of Pandora’s Eridian legacy — and score lots of sweet, sweet loot. It feels a bit outdated in light of the improvements implemented in Borderlands 2 and 3, but it still hold up surprisingly well. The Pre-Sequel gives some backstory to on one of the franchise’s key characters, Jack; and Borderlands 2 gives Handsome Jack center stage in what is probably the best game narratively as well as in its more refined action. These base games along with all their respective DLC make the Borderlands Legendary Collection a great value of action-packed insanity, on the Switch or any other platform. Come on, little one! Time to die! 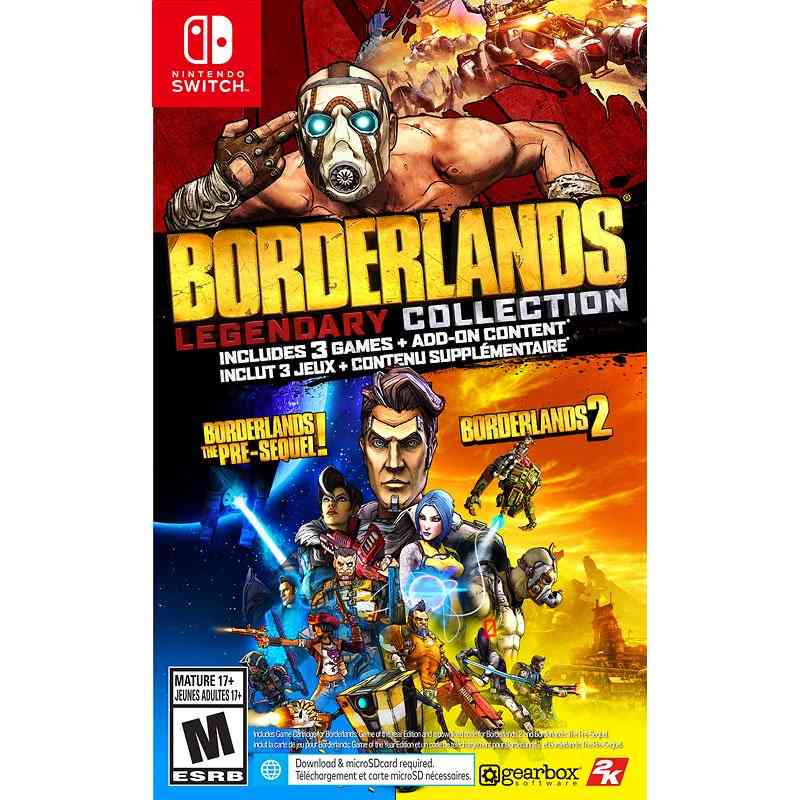