Doom Switch Review – Demonic Annihilation in the Palm of Your Hand

Back in March when the Switch was first released, Nintendo made it clear that it wanted the new console – unlike the failed Wii U – to be for “serious” gamers as well as casual ones. That meant full, authentic ports of the biggest games that played just like they did on the PS4 and Xbox One. And they proved that was no empty promise when they boldly announced that FPS hit Doom was coming to the Switch, in the same form as it had on the other platforms. But promises are cheap; with the Doom port finally arriving on Switch this November 10th, we find out if that promise has been kept.

I’ll get to the big question right away: if you have played Doom on the PS4, Xbox One or PC and you’ve been wondering if the Switch version measures up, the answer is a definite yes. Somehow, Bethesda has managed to squeeze the full experience of this epic FPS onto the small screen of the Switch, with almost no noticeable difference. As someone who has put hours into the PC version, my playthrough on the Switch took me through the same, perfectly-designed levels, wheeling through the same arsenal of weapons and cutting the same gruesome path of death and destruction through swathes of demonic enemies. And incredibly, this time the apocalyptic mayhem was fully contained in my two hands.

Much has been said about the merits of Doom on previous consoles, and I will spare you a straight reiteration, except to just confirm that all of the things you loved about the original are here in the Switch port. Heart-pounding, kinetic violence is in full force with a perfectly-balanced combat system that somehow challenges you while still making you constantly feel like a powerful badass. That comes from the guns – especially the celebrated BFG – but also those cool Glory Kills, which offer a steady diet of visceral, hands-on brutality that feeds your inner barbarian in a way that few other games have.

“wondering if the Switch version measures up, the answer is a definite yes.”

The full Doom single-player campaign is here – all 10-15 hours of it, depending on how much time you take to discover all of the game’s secrets, including upgrades, tokens, keys, Easter Eggs and classic Doom levels buried for you to find. Multiplayer is included too – although my pre-release playthrough didn’t yet feature enough other players to try it. You also get all the game’s DLC, making the $60.00 US price a bit easier to swallow. Unfortunately, you won’t get SnapMap on this version, so if you liked that creative side to the game, you’re out of luck. That’s apparently the first of a few compromises made to get this port done.

And of course, some compromises are bound to be necessary in bringing a game like this to the Switch, and they are evident at times. Resolution is set at 720p even while playing in the dock, and that is a pretty big negative when playing a game that relies so much on slick visuals for its appeal. Playing on the smaller screen, as most apparently will, you are not as apt to notice the visual downgrade; move the game to your TV, however – especially that 65” 4K-ready monster you just proudly hung on your wall – and the difference is harder to ignore. 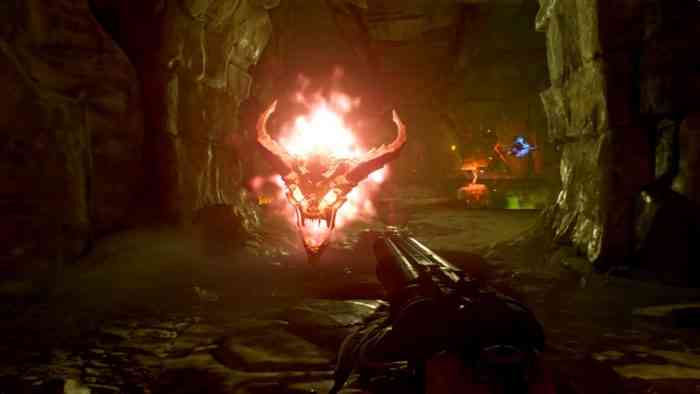 In terms of the action, you’ll also have to live with a framerate of 30 FPS instead of the original 60 FPS. That’s a pretty hefty drop in smoothness but I was impressed that the game never stuttered or froze, except for brief, tiny instances when things got very crowded and hectic. Overall, any worries that the diminutive Switch lacked the horsepower for big titles are put to rest by Doom’s solid performance on the handheld throughout my time with it.

Possibly the biggest downside to the Switch’s smaller screen is in reading Doom’s text. The writing in menus is so small that it is downright illegible at times – if you’ve played the game on other platforms you’ll probably be able to navigate them by memory, but otherwise, it’s a lot of squinting and even guessing. Later, during actual playtime, there are moments where you need to read a sign or pick out a small object and these times will often require you to stop and move up close to them in order to see them fully. None of these is game-breaking, but they are annoying.

You also might have a hard time making out smaller or far-away objects with the small screen. Enemies that are in the distance tend to just be a tiny dot, and since much of Doom is dimly-lit or even outright darkness, the problem of screen size becomes a factor. Players who have played the game already on the PS4, Xbox One or PC will have the advantage of memory to help them out at these times – new players will find their progress slowed as they bring their faces up to the screen to see details. 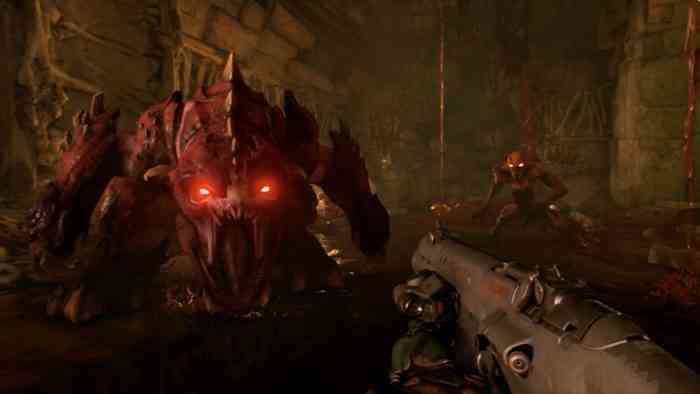 Another question I had with the Switch version of Doom was the controls – would such a fast-and-furious playing experience work on those tiny little thumbsticks? My answer, after playing for hours is, kind of. There is no doubt that it is awkward at first, as you get used to using the thumbsticks to move and the triggers to fire, all while keeping your eyes on the little screen. That brief delay or slip of your thumbs on those little buttons slows you down, for sure. Yes, you do get used to it more as you play, but I definitely recommend that you play Doom using a Switch Pro Controller if you can.

“Doom on the Switch is the real deal.”

But despite some shortcuts and downgrades in shoehorning a huge FPS juggernaut onto a handheld, Doom on the Switch is the real deal. All of the action, all of the fun, and most of the gameplay are in your hands, in a port that definitely fulfills its massive expectations. And let’s not forget that what you give up in the Switch version is counterbalanced by what you get: the ability to take this classic action title anywhere with you, on a fully-portable platform. I spent last weekend playing Doom while waiting for the bus, and that’s something I thought I would never say. 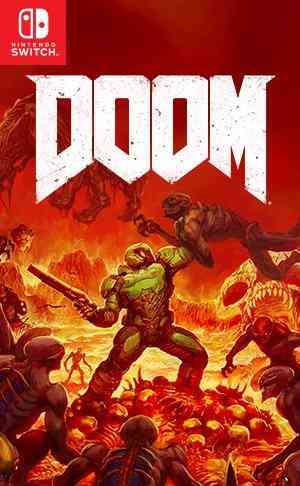 
Here Are the Winners of the Golden Joystick Awards 2021

You Can Now Run Doom On a Twitter Account. This Is real.
Next Horizon: Zero Dawn – The Frozen Wilds Review – One of 2017’s Best New IPs Is Back for More
Previous Hidden Agenda Review – Unconventional Experience Misses The Mark