Those Who Remain Review – A Gaping Maw of Irrelevance

Those Who Remain Review

Those Who Remain is a psychological horror game developed by Camel 101 and set in the sleepy town of Dormont, a seemingly normal place to live. The story opens with Edward, the protagonist, deciding to break up with the woman he is having an affair with even as he drives to a motel to spend one last night with her. It quickly changes into an atmospheric horror story when Edward receives a phone call telling him to stay in the light—because when he doesn’t, menacing shadow creatures will devour him.

I had hopes for Those Who Remain. I love a creepy motel, to the point where I once booked a motel staycation and brought motel murder mysteries with me to evoke the atmosphere I enjoy so much. So starting off in a creepy motel is exactly up my alley, and I did find myself intrigued by the missing people and the mystery inherent in a phone call telling me to, “Stay in the light.”

Stay in the Light

I personally found the atmosphere genuinely successful. The first mark of a horror game should be: does it scare you? And yeah, I was scared. To be honest, it’s not hard to scare me, but hey, still. In the first few minutes of the game, the suspense and the spookiness of having the dark figures at the edges of the light always looking at me freaked me out so much that I turned the volume down and put on a peppy playlist so I could play without turning the game off every minute and a half.

There are no jump scares, so this fear came from good environmental storytelling in the opening scenes of the game, as well as nice atmospheric touches and a dark, encroaching soundtrack. Off to a good start, then.

Sadly for me specifically, the motel is quickly left behind. Sadly for all players, the story doesn’t live up to its initial promise. After a little while, my fear dissipated and I found myself bored with the events of the game. Those Who Remain quickly turns from a story about Edward trying to find his disappeared paramour and get safely to town to a series of explorations of different places, from libraries to family homes to police stations, which often have abrupt transitions that seem to be necessitated by plot and are orchestrated by plot magic. 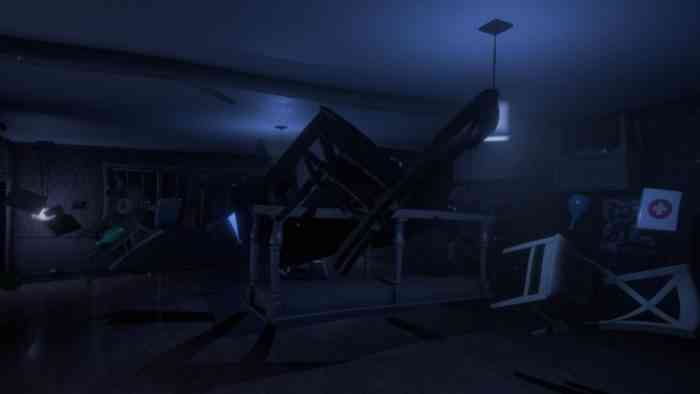 A major element of the plot becomes Edward judging the crimes of others. Those Who Remain asks some interesting questions about the morality of people who do terrible things for sympathetic reasons, but I never found myself truly invested in them or Edward’s reactions to them. Edward, while fine enough, never struck me as anything more than yet another sad video game man with a broken family. I also found myself wondering, “Why doesn’t Edward just sit in this brightly lit room until dawn?” enough times that it was distracting. The incentive for him to carry on just didn’t seem strong enough. And the ending out of three that I got just didn’t seem worth all the effort it had taken to get there.

I like exploration and puzzle games, and I didn’t find there to be anything egregiously wrong with the game, but I also didn’t see anything particularly notable either. The only gameplay feature I actively disliked was whenever there was an enemy in the midst. Since Edward has no controls other than walking, the inability to properly hide from the enemy was nerve-wracking in a lame way…and then didn’t end up being a really big deal. The biggest enemy, which is best described as a titty monster with a headlight for a face, seemed more interested in her own feet than she did me. She still killed me plenty of times, though, because I sometimes I was too bored to fight the good fight.

Overall, Those Who Remain is fine. Just fine. It’s not terrible and doesn’t deserve to be hate-played or mocked or anything like that. Edward is a fine protagonist, the eerie atmosphere starts out strong and devolves to fine, and the gameplay is fine. I’m sure a lot of work went into this experience (I say this a lot, but I mean it), but unfortunately, there doesn’t seem to be anything keeping this game safe from the gaping maw of irrelevance.

Love the motel, though.