Heavy Boots of Lead, Fills His Victims Full of Dread

As the life cycle of the Playstation 4 begins to wind down, PSVR owners have been left wondering what the next step for their beloved headset will be. For now, the future remains uncertain, but what’s clear is that Sony isn’t yet done with this generation of virtual reality gaming. Their swan song of sorts has only just begun, and Iron Man VR is a message of reassurance that the years ahead are looking bright. While developer Camouflaj’s take on the life of Tony Stark isn’t the advancement in VR that, say, Half-Life: Alyx was, the fact of the matter is donning the Iron Man suit and taking to the skies is just flat-out cool. If you have the hardware, there’s no reason for you to miss Iron Man VR.

I think most were in agreement that regardless of whatever became of the missions, graphics, and storyline – so long as playing as Iron Man felt good, all else could be forgiven. And that’s mostly the case here. Iron Man VR struggles with repetition, and a forgettable story (that I’ll admit, gets better in the final act). But over the six to eight hours required to beat the game, it won’t matter. You’re here to suit up, take flight, and wipe the floor with some baddies – and Iron Man VR nails this.

I felt as if I was a child again the first time I launched myself into the air. Or, maybe more appropriately, I felt as if I was living my childhood fantasy. And more so than anything else, isn’t that what we grasp for every time we hit the start button? In that sense, Iron Man VR is one of the greatest games I’ve ever played. The feeling of zipping through the air, the rush as the clouds race by and the wind whips your cheeks. Honing in on a target and launching the assault – It all plays excellently. And while the general impreciseness of the PSVR’s tracking system leaves room for improvement, flying and shooting are mostly everything I could have wanted.

A common sentiment amongst the PSVR community is that because ‘Move’ controllers lack joysticks, using them often becomes more of a hassle than it’s worth. And I’ll admit, I’ve seen otherwise good games fall apart due to a poor control scheme. But Iron Man VR never really suffers from that problem. Getting a handle on Tony is relatively straightforward, and the tutorial that’s provided should be more than enough for anyone to get off the ground. The simple-but-smart mechanics like tilting your hand up to open your palm or your wrist down to activate secondary weapons work brilliantly. And I love that the face buttons are used sparingly, not to overwhelm the player. A lot is going on in Iron Man VR – things are fast-paced, and it’s easy to lose track of enemies. Not having to fight the control scheme is much appreciated. 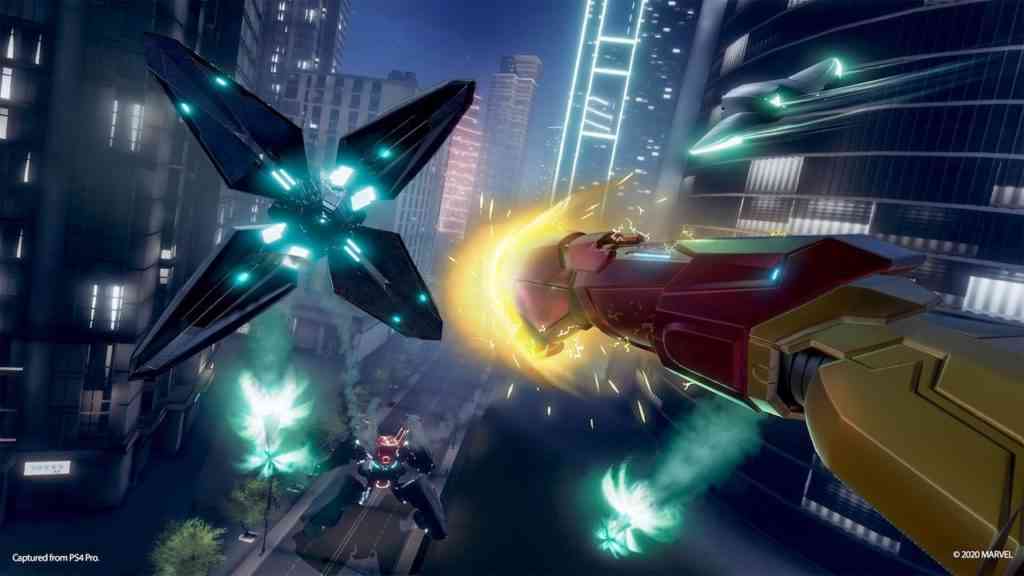 I did have to scratch and claw to keep focused on the story, however. It’s a snoozer. At least, until the final act. Due to some excessively subpar voice acting (Josh Keaton’s Tony Stark is, in my opinion, the worst performance the character has ever received) and a mundane roster of villains, the first two acts of the game are a tremendous slog. The final two missions are well executed and deliver a couple of beats that land with a generous amount of impact, but overall the story is forgettable. Though, as monotonous as the writing is, the missions and overall structure of the way the campaign plays out are equally so.

There are twelve chapters in Iron Man VR, and nearly every one of them suffers from a feeling of tedium for two reasons. The depth of the enemy variety is about as deep as a kiddie pool. And every mission boils down to beating this same handful of enemies, over and over again. Sure, there are interactive environmental moments where you’ll be tasked with, for example, fixing the landing gear of a plane. But the game mostly plays these for you. On top of that, of the three boss fights that occur, only the last one truly feels different from the other levels. If it weren’t for the moments in between, where Iron Man VR breaks things up and finds its sense of humor, it would all feel like one giant mission.

Equally as enticing as putting on the suit, exploring Tony Stark’s mansion turned out to be exciting in a different way. I would have liked more rooms to explore, but what’s there is a lot of fun, especially the garage. Equipped with a kitchen, gym, and play area, I’d rather not say how much time I lost messing around with everything. Eating a sandwich or some grapes in VR wasn’t supposed to be this satisfying. Lifting weights and hitting the punching bag are wonderful touches. And the arcade-style basketball hoop works quite well for what it is. These little nuances are what make VR experiences genuinely shine, and it’s no different with Iron Man. I just wish there were more of them. 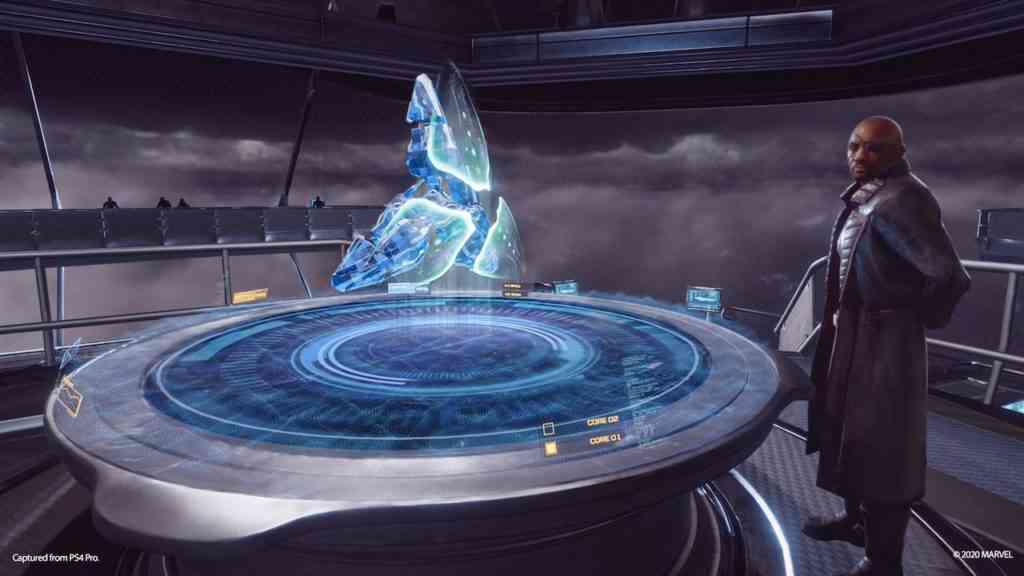 As you progress through the story, each mission opens up with further challenges becoming accessible to the player. On top of this, each stage has a ‘Free Fly’ mode, where you can hop in and explore the map until your heart’s content. These didn’t do enough to keep me coming back, but they’re there nonetheless. The big problem is that not only do the environments suffer from the same sort of screen door effect that plagues every PSVR game, but the levels are uninspired and lacking any creativity. The lighting is fine, and sunsets go a long way to mask a lot of the shortcomings. But if you slow down and take a look at your surroundings, you’ll see things struggle to hold up. Shanghai, for example, was great upon my first arrival. Five minutes in, however, the honeymoon had worn off, and the blocky, lifelessness of the city became too painful to ignore.

You would think with how often Iron Man VR needs to load that there would be a bit more to those levels. But sadly, that isn’t the case. I couldn’t believe how often I was standing in complete darkness as the game chugged along, jumping between cutscene and gameplay. Sometimes, you’ll get a loading screen with a few pages of information you can flip through, but these never change. It would have done wonders if there was some target practice to utilize while waiting—especially given that you retain all the inputs during these downtimes.

Honestly, though, what does it all matter when the core experience is something you’ve wanted since you were five-years-old?

Despite several issues, Iron Man VR was worth the time. A severely repetitive mission structure, lackluster enemy variety, mediocre environments, and a dull story can’t stop this train from rolling. It’s the beauty in the uniqueness of its sales pitch. This is the closest to being Iron Man you’ll ever get. We’re in this exciting, quiet-before-the-storm era of VR gaming. Developers have the opportunity to lay extensive groundwork and show us the possibility of what we’ll see in the future. That’s what Iron Man VR has going for it. 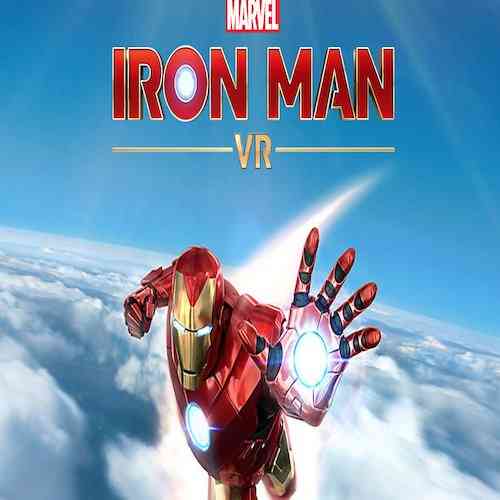