Marvel’s Midnight Suns Includes a Ton of Systems to Keep Gameplay Consistent, Despite the Cards

After attending the in-person preview event for Marvel’s Midnight Suns and speaking to a few other attendees, one thing has been made clear: the game shines brightest in that moment-to-moment gameplay. Your enjoyment of the game will hinge on whether you enjoy this kind of card-based tactical thinking.

Unfortunately, the idea of card-based mechanics did not receive the warmest reception among Firaxis’ Xcom fans. It’s a different category of tactics that requires different kinds of thinking, and some may find the transition a bit jarring. My last preview article briefly covered what these changes accomplish for the game, but here, I aim at a deeper core. Speaking as a fan of both TCGs and Xcom, I found Marvel’s Midnight Suns to be an excellent mixture of both – and hopefully, this article will show you why. Along with giving you a few tips and tricks to help optimize your play, of course.

To start, we’ll provide a very brief overview of what’s in this game, mechanically speaking. You have three heroes and six random cards from your deck. You’ll get 3 card plays, 2 card redraws, and one movement action per turn.

Some cards will refund themselves or give special bonuses if they kill an enemy – usually, those are your basic cards that also generate “heroism”. You’ll be spending heroism on more powerful cards and on using your environment to attack enemies.

All non-environmental attacks and enemies have functionally limitless range, which unfortunately makes movement a rarely-valuable resource. It has the obvious use of dodging area-of-effect attacks, but can also be used to position heroes around terrain objects.

Optimizing your usage of the objects around you is something you’ll always have to think about. They’re a very consistent resource for squeezing out extra damage! While these actions cost heroism, they do not cost card plays, giving you a convenient outlet every turn. Even when you think you’re out of actions, have a look around – you might just see an extra bonus. 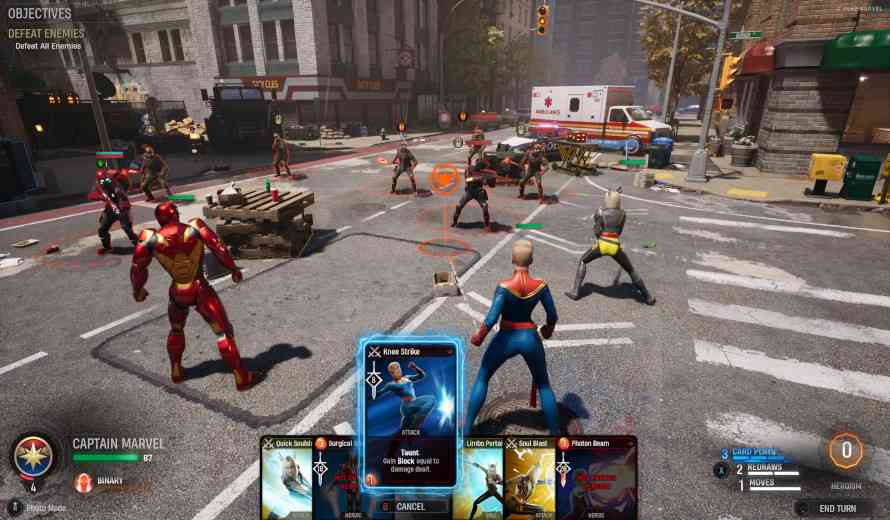 Many story missions will require use of specific heroes. Some research projects require using certain heroes a few times. Marvel’s Midnight Suns aims to overturn the common tactic of just using a few heroes until the end of the game – a problem you no doubt experienced in games like Xcom. Its solutions aims to get you using nearly your entire roster over the course of a single playthrough, developing each one to a significant, though not complete, degree. You won’t be able to use every character build and tactic over a single run.

To get the most out of Marvel’s Midnight Suns, you’ll be thinking a lot about teambuilding ideas. To that end, building hero teams with different synergies in mind will be your key to victory. Spiderman is good at building up heroism, for instance – but where will that heroism go? Perhaps to Captain Marvel, so she can enter her Binary state and dish out even more damage? Or maybe Ghost Rider, whose unbeatable damage comes at the cost of his health? Will you have a way to heal him afterwards? Decisions like this are of fundamental importance, and some heroes are better suited to different kinds of encounters. You can spend a lot of time considering the best hero-combination for a given boss fight, and even longer picking the right cards for each hero’s deck to best play off of each other’s strengths.

It’s worth noting that some of the preview event attendees I spoke with said that Magik was noticeably stronger than the other heroes. This isn’t something I can verify myself, as I didn’t use her during my allotted hours. But if you find yourself stuck, consider building a strategy with her in mind. You might just find the success that the others found.

There’s something a bit deceptive about the idea of tactical card games. The implication is that each turn, you’ll be given a random set of tools from which you’ll build a grander plan. That each turn will consist of picking the best cards for your situation, and that if you don’t draw any good ones, you’re out of luck. Rinse and repeat every turn cycle until you either win, or RNG decides you lose. This is not true in Marvel’s Midnight Suns.

Many players, especially Xcom fans, aren’t too attracted to the idea of not having access to most of your arsenal at any given time. While that fear is, to an extent, justified, it’s not inherent to card-based games at all. If my experience with modern Yu-Gi-Oh! Has taught me anything, it’s that deck inconsistency and “useless” hands are optional. It’s fairly easy to design a card game structure with consistency in mind, and Marvel’s Midnight Suns has offered you a variety of tools to get the consistency you need. 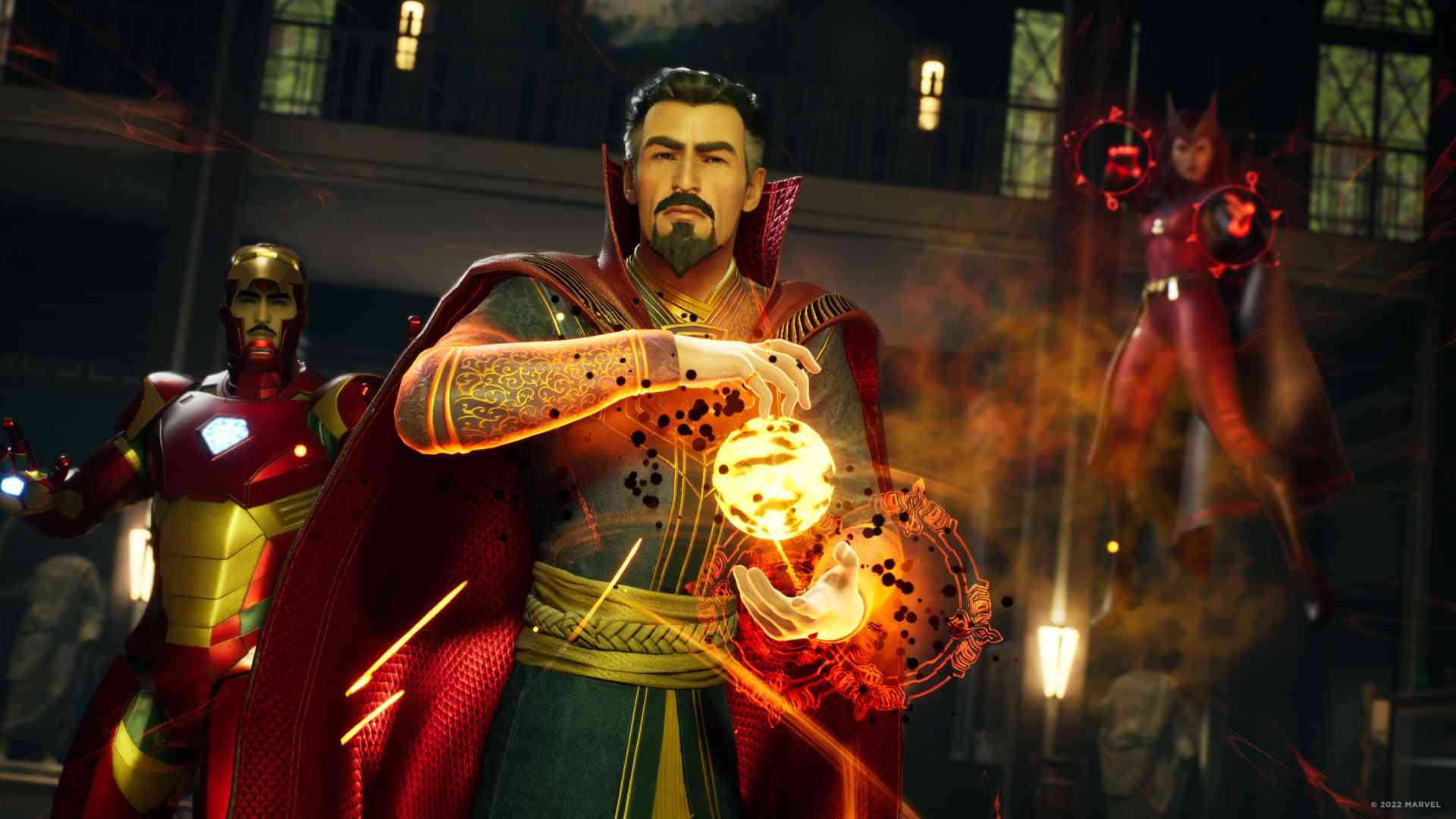 Here Are Some Numbers:

At 8 cards per hero, you’ll end up with a 24-card deck, with up to 2 copies of a card allowed within. Your opening hand size is 6, plus 2 redraws per turn. A third of your deck is made available to you before you even play any cards. Whenever play passes to you, the first thing the game does is refill your hand – spent cards are replaced by others from your deck. Unused cards will carry over for as long as you want to keep them.

On top of that, all heroes have cards that draw more cards. But these aren’t normal “get a random card from your deck” abilities, they give you more cards linked to that specific hero. So, if you need Spider-Man’s entangling-web attack to make your strategy work, you’ll run that card as a 2-of, then run a 2-of of the card that’s likely to snag it directly from your deck. That’s 4 ways of accessing the web in a 24-card deck, of which you see a third on your opening turn. All that on top of the inherent draw power you get by just playing cards and redrawing. And if that’s somehow not enough, other heroes have cards to make your strategies even more consistent.

Marvel’s Midnight Suns is a game that will require a degree of planning and a keen eye in order to reach a victory. The card game structure carries obvious risks if you absolutely need certain cards to make a strategy work, but the game includes a variety of structures to lend a helping hand. If you find yourself struggling, there’s usually a system to help you out. Be it something as small as a stray box to throw, or as large as an entire hero build to help “solve” a tough encounter. The game offers many challenges, but few unbreakable walls, so be observant! The puzzle always has a solution, and the excuse of “I just drew bad cards” is one that Marvel’s Midnight Suns aims to eradicate. Temper your thinking with that in mind, and you’ll find the success that the game wants you to reach.