With a title like Soulstice, you’d be forgiven if you thought Rely Games Studio’s new action title was a FromSoftware clone. I mean, dude, it’s right there in the name. But Soulstice has more in common with Devil May Cry than Dark Souls. Ultimately, though, this upcoming action-RPG hack-and-slash is its own, unique thing.

I had the opportunity to both listen to the developers talk about Soulstice and have some hands-on time with a couple of levels. It definitely brings a few new ideas to the third person action space, and it was refreshing to play a game that didn’t borrow too heavily from the Soulsborne playbook.

In development since 2018, the developers describe Soulstice as a “hack-and-slash action” hybrid. It’s a good description. Soulstice has a bit of everything. There’s platforming and environmental puzzles, combo-based combat, and a little bit of anime influence in the character design. At least in the bit that I played, the levels definitely had a gothic, Souls-like look.

Soulstice’s biggest hook is the way it allows players to control a character duo. Briar is a flesh-and-blood warrior, and her ghostly twin sister is Lute. Together they form a chimera, or reborn union of souls. A large part of Soulstice is strengthening and exploring the bond between the sisters. In simple terms, Briar wields weapons like swords and chains, while Lute deals in more ethereal, magic damage and defense. It wouldn’t be an RPG without character upgrades. In this case Briar’s upgrades come from over 70 weapons of increasing power. Lute can also upgrade her powers via skill tree, like her ability to cast a protective force field over Briar.

Large scale enemy encounters are rated at the end of battle, from bonze to platinum. Each rank earns more XP to spend at the traveling merchant. Similar to Soulslike games, death means a restart at the last checkpoint, respawned enemies, and a loss of whatever XP had been accumulated.

Unlike Soulsborne games, Soulstice is entirely linear and takes the player through various districts of a sprawling dark-fantasy city. The look is very atmospheric and pervaded by mist. There were some platforming mechanics, and while they are pretty forgiving, the zoomed out camera didn’t do me any favors. It was difficult to be sure of where Briar was supposed to go or even to see her in the environment. In part, this is due to the drab palette of the city and the likewise drab colors of Briar’s armor.

Speaking of the camera, it’s probably the biggest hurdle to really enjoying Soulstice right now. It’s a fixed view camera that has a slightly annoying snap-back whenever you try to rotate it. And you will want to rotate it, too, because often enemies are out of view, firing at Briar and Lute. I think the developers are going for something like the camera in Nier: Automata. The combat is more hack-and-slash, though, so the instinct is to rotate the camera around the environment to find the hidden enemies.

Aside from fighting the camera, in the demo Briar and Lute faced a few different monstrous enemies and a couple of bosses. Melee combat includes fast and heavy attacks and several combos, and Lute has offensive powers as well. There’s no lock-on mechanic that I could find, which made targeting specific enemies a bit frustrating. At this early stage of development, combat is fun and using the complimentary powers of Briar and Lute adds interest and variety to what could be fairly repetitive encounters. The game’s dramatic music and engaging voice acting help propel the narrative, a relatively familiar-sounding story of an evil corruption that has spread through the land.

Soulstice is slated for release in Fall of 2022, so the team has time to make some adjustments. At the top of my list would be fine tuning the camera, and perhaps tweaking the lighting and contrast in order to make the protagonists a bit more visible in the world. There will be many districts to explore, so I’m hoping there will be more variety in the palette and enemies. Those caveats aside, I think that Soulstice has some genuine potential and I look forward to playing the final game. 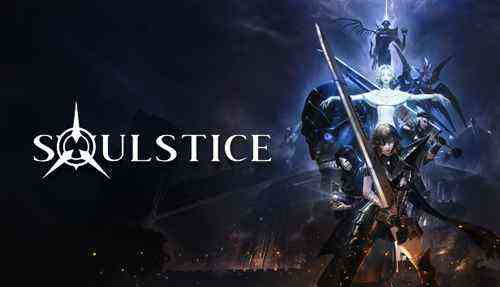