Yu-Gi-Oh! Master Duel has some big shoes to fill. Until this release, Yu-Gi-Oh! players had been going to a variety of free online emulators to get their card game fix. These options, while barebones, still offered players free access to every single card in the game.

In order to have a successful launch, Yu-Gi-Oh! Master Duel needed to set a strong first impression. The card economy, the available card pool, the features outside of the game itself – everything needed to be stellar. And given Konami’s shaky reputation in the minds of many, it was hard to imagine that Yu-Gi-Oh! Master Duel could overcome these barriers. If those fears sound familiar to you, you may be pleasantly surprised by what you find behind Master Duel’s doors. The TCG experience is fast, fluid, and explosive in all the right ways. 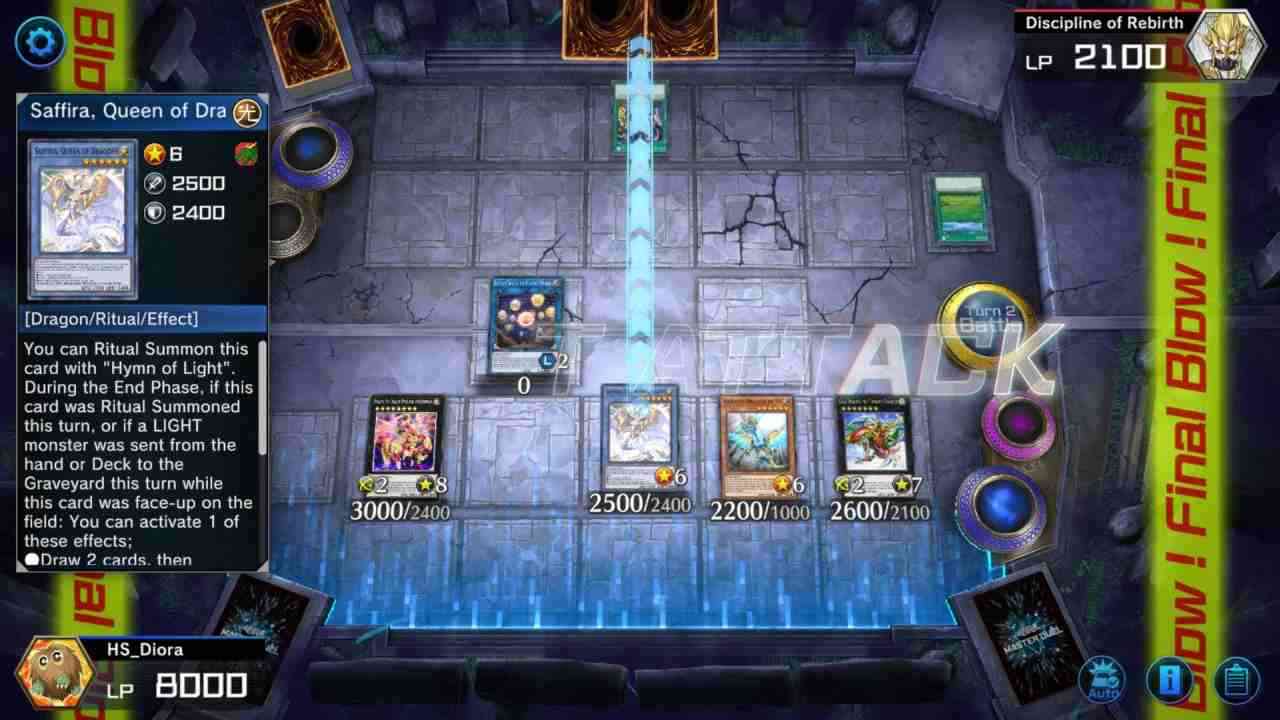 My Grandpa’s Deck Has No Pathetic Cards! …Okay, Maybe a Couple

If you’re a fan of the game from twenty-ish years ago, you might be disappointed to find that Yu-Gi-Oh! has evolved without you. It’s a totally new, unfamiliar landscape, and that can be off-putting for some. If you’re downloading Master Duel as a way of recapturing that vintage cafeteria table experience, you’d be better off looking at an existing free simulator, joining an online community, or waiting for an update.

Cower Before My Awesome Plan!

But what will you find behind Master Duel’s doors? Well, you’re reading a review for a Yu-Gi-Oh! game, so I’m sure you’ve seen a classic anime moment of ‘nerd pushes up their glasses, proceeds to absolutely destroy their opposition’. That’s how modern Yu-Gi-Oh! feels. Whether you’re the one executing a multi-stage combo, or the one looking for the best moment to interrupt it, everything feels like “just another step in my master plan!”

This familiar energy defines Master Duel’s presentation. Your opponent’s field will splinter and crack as you deal damage. Cards will recoil as larger monsters hit the board. The music swells as you prepare a lethal blow, and a fiery explosion celebrates your victory. 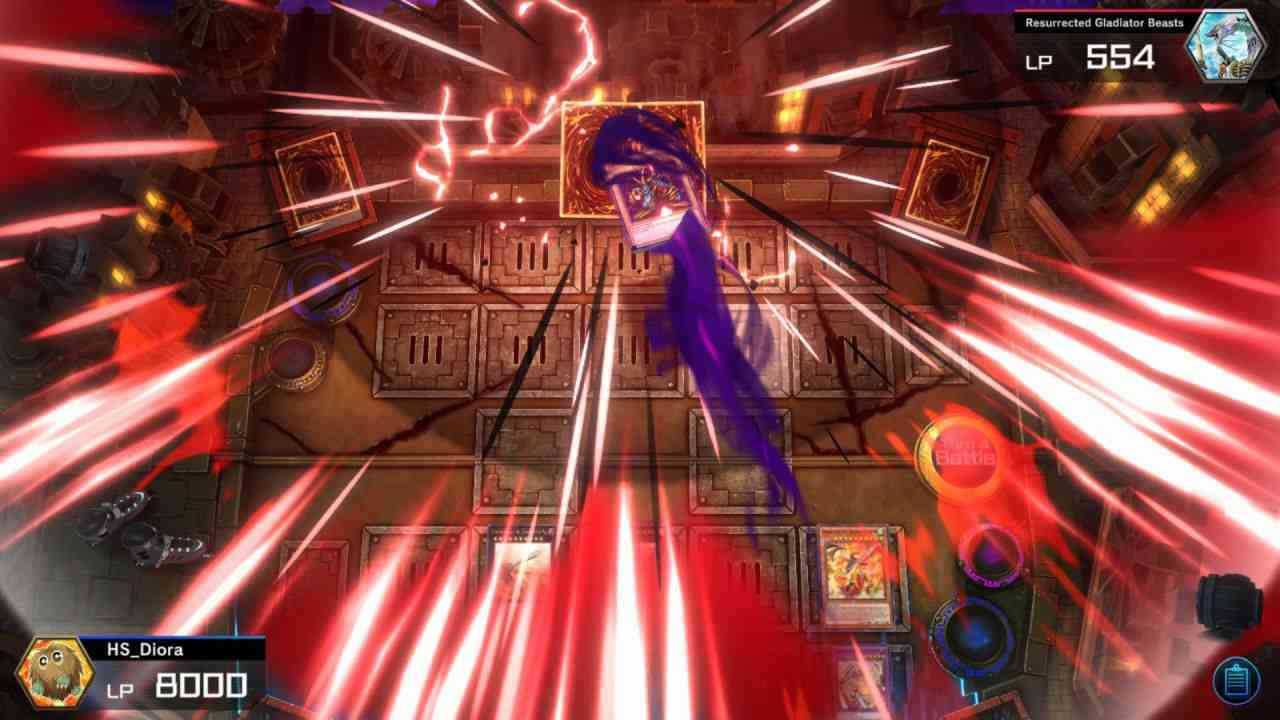 Yu-Gi-Oh! is a game were any blow could turn lethal. You’ll need to master your deck to act and interact at the best time and in the best way, and the end result is oh-so-satisfying. But that complexity also creates a steep learning curve. And should you fail to climb it, achieving victory can feel like an insurmountable task. Yu-Gi-Oh! Master Duel is very good at rewarding skill, but is cripplingly punishing to those below.

And with a game as susceptible to power creep as Yu-Gi-Oh!, it’s easy for new or returning players to feel completely outclassed; the cards they once knew cast into obscurity, or put on life support with an entire “archetype” of cards designed to keep them maybe-playable.

YuGiOh isn’t the most accessible game in the world. The basic rules are simple enough, but there have been so many card types added throughout the years. It’s easy to feel lost. Luckily, the game features a lengthy set of single-player adventures. Each one is intended to teach you a slice of the game and kick-start your collection.

This solo mode takes place through multiple smaller campaigns that highlight a specific “archetype” (a card faction, basically). It’ll teach you the mechanics of that set of cards, while also giving you a healthy dose of lore along the way. 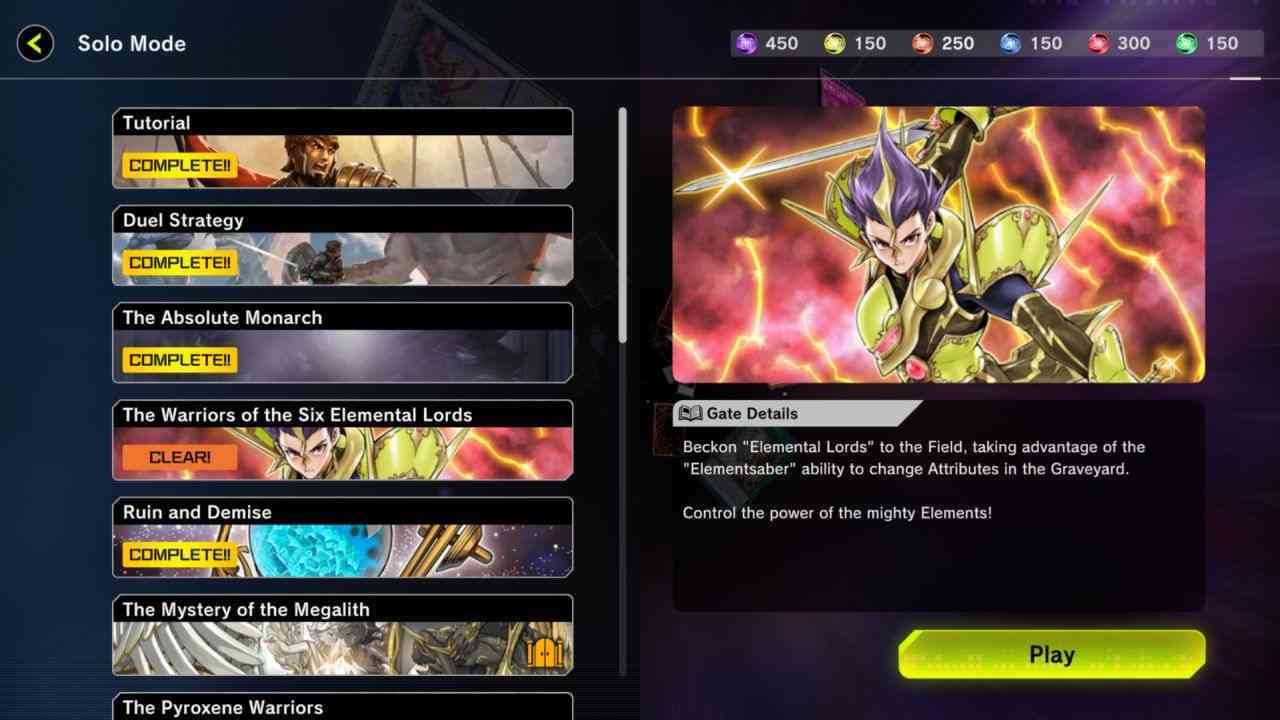 The stories conveyed are… well let’s be honest, they’re not great. A few standout examples have some great ideas (the “Gladiator Beasts” come to mind), but we see very little of what these characters and worlds are, beyond a couple of paragraphs. It’s all raw text, by the way. No voice acting, and minimal animations. And unlike many card games, Yu-Gi-Oh! has little interest in conveying story or character through card design – the most you’ll get is card art that references other card art.

As for the tutorial’s quality, it’s (at best) adequate. By the time you’re done, you’ll know how to play Yu-Gi-Oh!. But you won’t know what strategies are decent. Or worse – you’ll be fooled into thinking the pre-constructed decks are anywhere near playable. You will 100% need to look up decks and new-player guides online if you want to get the most out of Master Duel.

Arm Yourself for Battle

Let me tell you one quirk about Yu-Gi-Oh!’s gameplay. Modern decks are consistent – very consistent. With so many ways to grab different cards from your deck, and with opening hands determining so much of what you can do in a given game, the weight of each swapped card can be instantly felt. This is excellent not just because it makes deckbuilding so much more important, it makes deck testing so much more fun. And in a game like Yu-Gi-Oh!, building up deck knowledge is paramount. 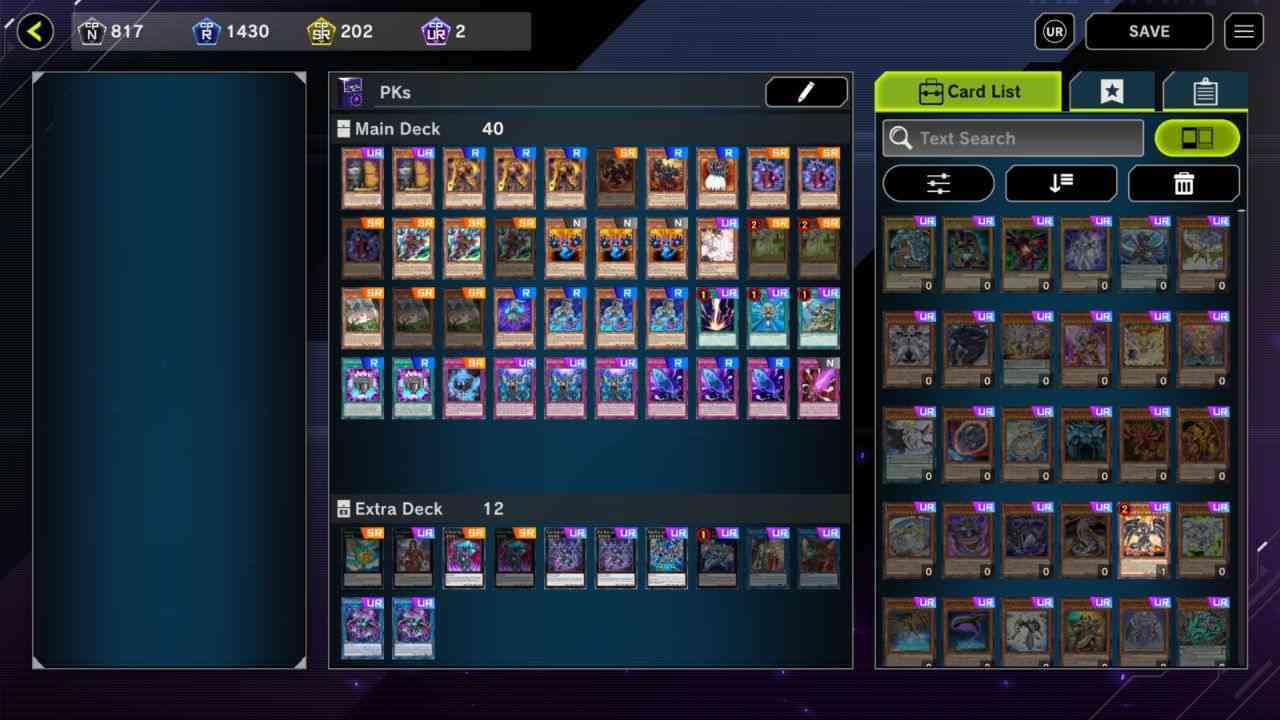 I cannot stress this enough about modern Yu-Gi-Oh! decks: looking up deck lists online will not make you a good player, practice will. Your mileage here will vary between strategies, of course. But most decks are something you can fiddle and study with for weeks, months, maybe years.

This is both a blessing and a curse. On one hand, each new deck you pick up can be a whole new adventure for you to learn and master. But on the other, “pick up and play” decks are few and far between.

But overall, the deckbuilding part of Yu-Gi-Oh! has a gameplay loop of its own – a process of optimization that rivals actual gameplay in terms of enjoyment. Which is a shame, because the free-to-play nature of this game really discourages that kind of branching out.

Did Konami Pull a Konami?

When you first start the game, you’ll be given enough currency to buy an absolute ton of packs. More than enough to liquidate the cards into “crafting points” and build 2 or 3 competitive-level decks. But once the initial “freebies” run dry, the limitations of this crafting system will start to crop up. “Ultra rare” cards can only be crafted with “Ultra Rare” crafting points, which you can only get by dismantling unwanted Ultra Rare cards. Which you can only get through packs. And as you’d expect, pulling any Ultra Rares is… difficult. 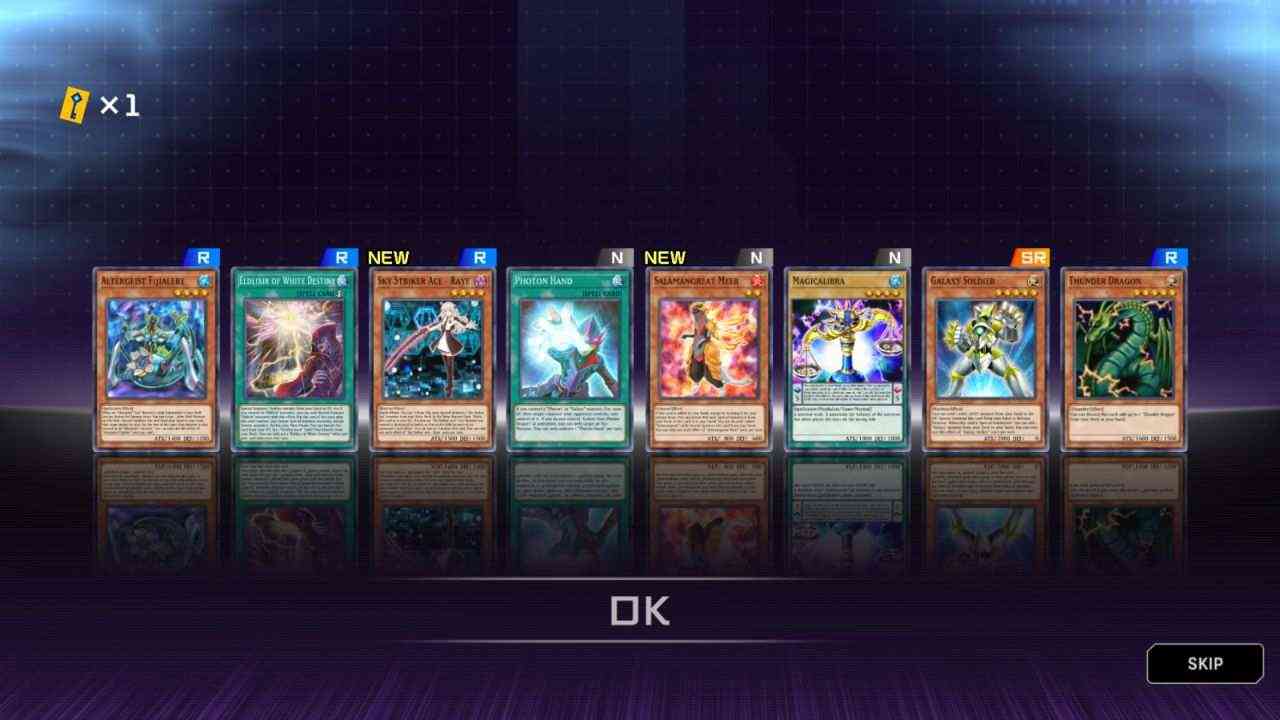 Konami has made sure that no matter what deck you’re playing (yes, even the older, unplayable strategies), there will be a selection of high rarity cards you’ll need to craft. Because of this, you’ll start to feel very frugal after the first few hours of deckbuilding. You’ll hesitate to try any new cards unless they’re “Normal” or “Rare” (you’ll be drowning in those crafting points with almost no effort).

Of course, you could always just skip this grind… by buying gems to get more packs. Packs are $2 in gems apiece, by the way. There are ways to get gems without paying, but this being a free-to-play game, it’s a glacial rate.

Yu-Gi-Oh! Master Duel is an excellent game buried under a few layers of frustration and potential hang-ups. Excavation efforts are easier than they might appear, and the game does an okay job of helping you out. The game can be frustrating and off-putting for some, but if you know where and how to interact with your opponent’s multi-minute combo turns, a whole world will open up for you. Even as I write this, I find myself tempted to boot it back up for “just one more game.” And given how close I am to my assigned word cap, I might do just that. 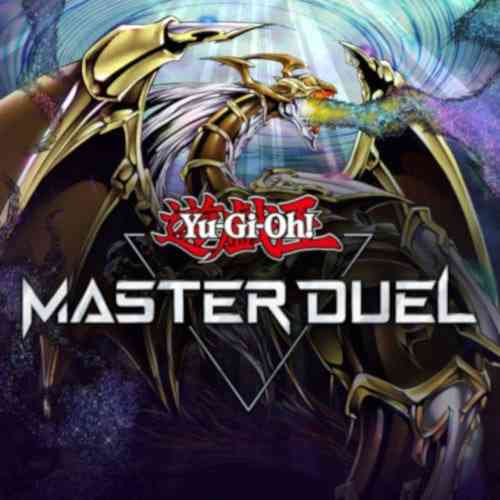