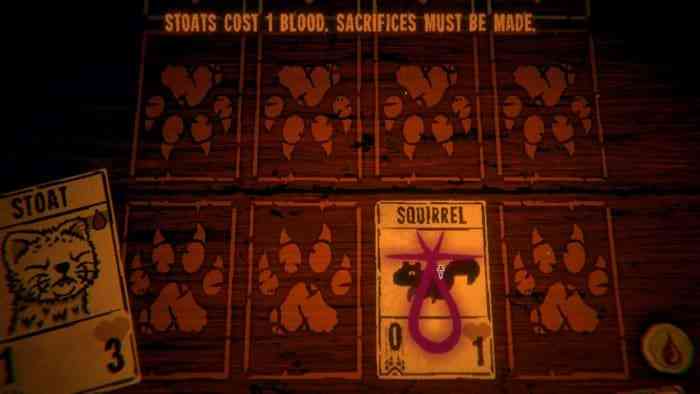 Every year seems to have an indie darling that sneaks up and sinks its teeth into a big chunk of the gaming public. Last year it was Hades, and this year it’s Inscryption. What appears to be a deck building roguelite quickly becomes much more than that. Created by Daniel Mullins of Pony Island fame, Inscryption is a fascinating game for a lot of reasons. The core gameplay mechanics and card battles are remarkably robust, with layers of increasingly complex mechanics laid over top as you progress through the most interesting part of the game: the narrative. It’s horrifying and psychedelic, mystifying and creative, and it’s a non stop thrill ride from the first second. Clear your calendar before you jump into Inscryption, as you’ll be up all night going for just one more run.

Resident Evil Village is an outstanding game, and one that scored the highest of all in our team voting. What’s interesting is most of its points came from mid pack rankings – 4s, 5s, and 6s – rather than top dog honors. That’s not a knock against the game though, as it goes to show just how broadly appealing Capcom managed to make a game that was a tiny niche just a few years ago. And Village really does run the gamut with tense stalking and chase sequences, excellent combat and boss fights, and some truly terrifying scary sections. It’s also gorgeous from head to toe, and we don’t just mean the titular Lady Dimitrescu.

The level of detail is frankly bonkers, and you could spend hours looking at all the detail and effort put into scenes like the castle and the smelting plant. It all comes together in a glorious 60 frames per second on the new consoles, and really plays well considering what clunkers Resident Evil games used to be. It may be ranking in the middle of the pack on our 2021 best video games list, but it’s a can’t miss masterpiece almost anyone can enjoy.

Insomniac is on an incredible home run streak. Spider-Man and Miles Morales were fantastic, and to follow up just months later (without much of the industry norm crunch) with Ratchet & Clank Rift Apart is nothing short of astonishing. Ratchet and Rivet control like a dream with clever control mechanics like automated strafing, and the mix of gun based combat and platforming is some of the best we’ve seen. The guns are absurd, the characters are absurd-er, and the fun factor of Rift Apart is much like LEGO: suitable for ages 1-100. The story doesn’t do anything too creative, but it moves at a good clip, and provides just enough motivation to keep things engaging. With a good amount of side content and the most stunning graphics of the year, Ratchet & Clank Rift Apart is the best reason to get and PlayStation 5. Almost…