Marvel’s Spider-Man Does Whatever A Spider Can

Every so often, a piece of media becomes the gold standard for a genre; the benchmark which all subsequent efforts attempt to surpass. Super Mario Bros. was one of those games, Grand Theft Auto 3 another. Prior to playing Marvel’s Spider-Man and writing these words, I would’ve considered Arkham Asylum that benchmark in the Superhero genre.

Spider-Man isn’t reinventing any wheels, but each aspect of the experience is utterly brilliant. Unbelievably gorgeous, ridiculously polished, and packing everything you’re looking for from a Spidey experience, Marvel’s Spider-Man is sheer joy from tip to tail. It’s the best superhero game of all time.

*This review discusses the story of Spider-Man, but doesn’t spoil anything. Promise.*

New York. The Big Apple. It’s one of the centres of the Marvel universe, and Spider-Man’s hometown. The scale of Manhattan is both staggering and enticing. There’s a huge aerial playground for Spider-Man to swing around, and I quickly found that each chunk of the map feels really unique. I was worried that constantly navigating NYC’s grid would get old or at least automatic, but that didn’t happen during my 30 ish hours (thus far).

The environment itself is mostly limited to the outdoors, with segments occurring inside after a quick load. I feel like some people will complain that there’s not more Spider-Man can do to directly interact with the cityscape, but honestly, that’s not what this game is about. 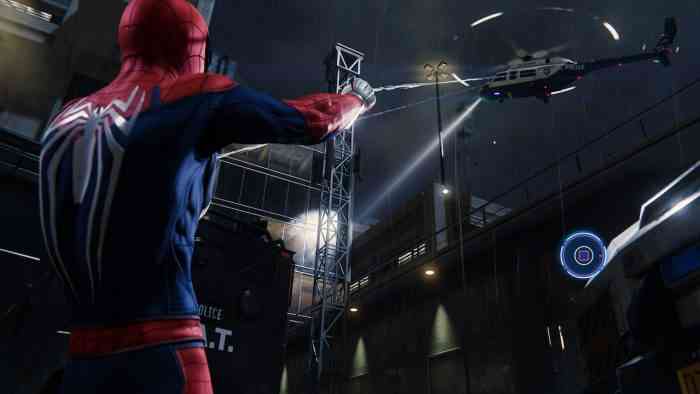 Let’s cover something quickly: Puddlegate is fake news. Have some things changed? Of course they have. That tends to happen as development progresses. To be clear: this game is absurdly gorgeous. You’ll stop and stare in awe of the gorgeous lighting and extremely impressive character models, and you’ll probably bumble a few sections because you didn’t realize that crazy cutscene is now gameplay. On my Pro, the framerate is locked in at 30 fps. I did notice a bit of dynamic resolution scaling in particularly insane sections, but only because I was specifically looking for it. In a practical sense, Spider-Man is jaw dropping.

Beyond the technical level, Spider-Man’s style is comic book perfection. John Paesano’s soundtrack would be right at home in a AAA Marvel film with its driving string sections and sombre horns, and the animation team deserves a statue in their honor. Spider-Man is all about quick movements and flexible agility, and everything certainly looks the part here. You don’t just feel like Spider-Man, you ARE Spider-Man. 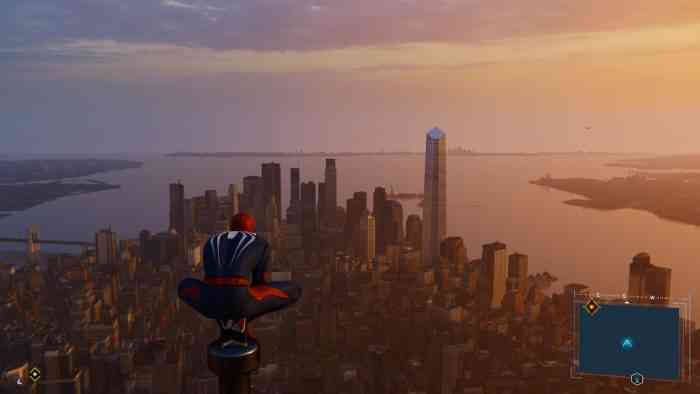 Spins a Web, Any Size

Table stakes for any Spider-Man experience is the web slinging. Fear not friends, for your friendly neighbourhood Spider-Man has the best damn traversal of any game I’ve played. I routinely went collectable hunting on the other end of town just because I’d get to swing over there. It’s incredibly good. There’s a fast travel system, but you won’t use it. Web slinging is just too much fun. That’s partly because of how fantastic this recreation of New York is.

Hell’s Kitchen has a completely different vibe than the Financial District, and that plays directly into how you approach them. I found myself naturally gravitating to different traversal methods as I crossed town, preferring huge, sweeping swings in some areas, or wall running and perch launches in others. Interesting to note is that web swinging does actually require something to web onto this time around. Gone are the days of swinging from the sky!

As good as the slinging and rumbling are in Spider-Man, the story is one of the most compelling elements of the experience. That’s tough to break down without spoiling anything, but what I will say is that the game is rife with character development. Everyone gets their moment in the spotlight, and brief though they might be, the writing brilliantly communicates motivation and intention. 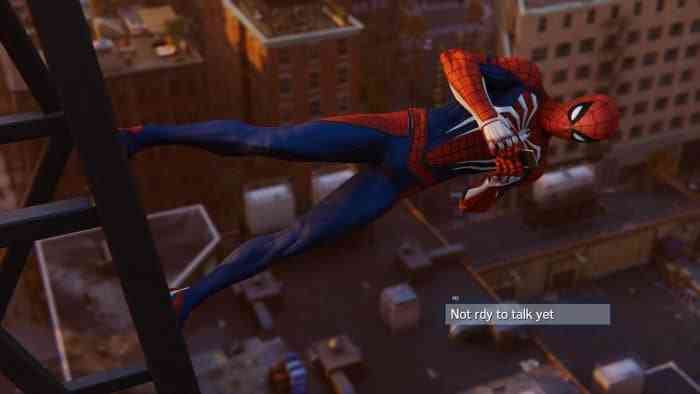 Spidey’s famous quips are of course on tap, and the bulk of the dialogue is your typical superhero chatter, but there are several genuinely shocking and affecting sequences along the way too. I’m not ashamed to say I got a wee bit choked up in a couple of places. It doesn’t dilly dally either. Each story mission pushes things forward in a major way, and has a specific purpose.

More than anything, what makes this story a smashing success is the fact that it’s not just a Spider-Man story. It’s also a Peter Parker story. That fact, and those moments, give Spider-Man a grounding that it really shouldn’t have. You’ll connect with Peter, and through him feel a meaningful connection to the other characters and the world at large. Yuri Lowenthal’s performance as Peter is a huge part of that – giant kudos to him for putting so much raw emotion into his work.

But hey, this is an action game, so there’s got to be some action, yeah?

Oh, hell yes. Insomniac’s quite obvious combat inspiration is Rocksteady’s Batman games, but to say Spider-Man has Arkham combat would be an absolute sin. There are combos and dodges and countless other similarities, but spider-combat is fantastically diverse. Peter’s a genius, so there’s a great assortment of gadgets to play around with, and his mobility is excellent thanks to the web shooters.

There’s a reasonably deep set of moves to pull out, with plenty of air combat options, disarming moves, and ways to spice up the direct hand to spider fighting situations. You know when you start to get bored of combat and avoid those scenarios? Yeah, that never happens here. Swinging around and getting into brawls is stupidly entertaining, especially when the volume of bad guys ramps up.

Not everything boils down to whooping ass though, as plenty of missions lean heavily on stealth too. Unalerted AI baddies are a bit dumb for my personal tastes, with narrow vision cones and an unnatural ability to not notice things. I mean, Spider-Man is pretty quiet, but it’s still one of my very few annoyances in the game. Then again, yanking fools out from right under their buddies’ noses is very Spider-Man. 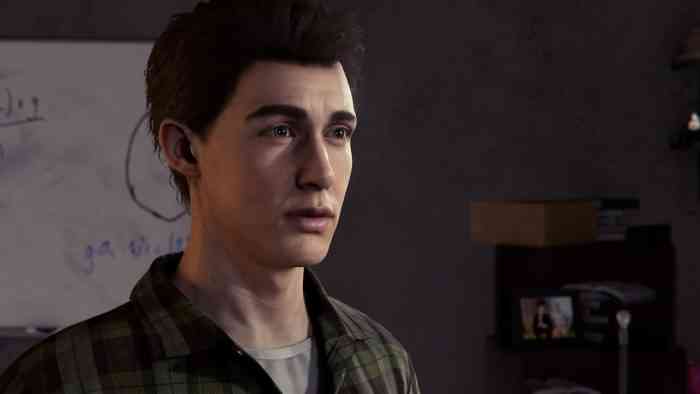 On the flipside, a massive thumbs up for Insomniac building minigames that are fun. I really loved the circuit and spectrograph puzzles, and I would definitely do more of those if I could.

Want to get back to your Spider-roots and stop some crimes? There’s an ok variety of them on hand, but they more or less play out the same way each time you run across the same crime type. These are some of the only moments where quick time events happen, and I’m perfectly happy with how they’ve been implemented. Some are timed while others are require quick tapping, but the common thread is that you’ll be involved in making Spider-Man a superhero instead of watching.

There are quite a few other things to do in the city, so I’ll mention my favorite for word count’s sake. Peter has left 55 backpacks full of spider-heirlooms around town, and you’ll have to swing and crawl all over the place to snag them. Sounds boring as hell, right? Yeah, I usually hate this stuff too. Shockingly, I’m 100% addicted to getting them all. Why? Well, you get to use the awesome traversal system for one, but Insomniac’s attention to detail means that each item has a unique piece of dialogue attached to it, and there’s some excellent fan service to be had there. 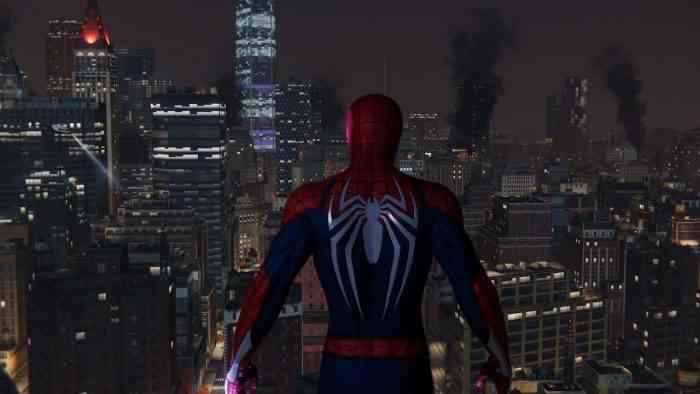 I won’t spoil the suit list here – that’d be a jerk move – but there are plenty of nods to the zillion comics and series Spidey has been part of, and each suit has a special suit power attached to it. Whether that’s a crazy web shooter move, or the ability to temporarily lower gravity, each of the powers is legitimately useful and cool. The skill tree is less a tree and more of a checklist, but suit mods allow for a bunch of flexibility in how your Spider-Man performs. You’ll absolutely want to try them all out.

There’s also a photo mode set to be added to the game, but as of this writing, the feature hasn’t dropped.

I can’t stop thinking about this game. If I’m not playing it, I want to be. The web-slinging is brilliant, the combat is deceptively deep and diverse, and there are a million things to do. The story is emotional, resonant, and teases fans of the series in countless ways. It’s one of the best looking games of the year, and honestly, one of the best games I’ve ever played, full stop. 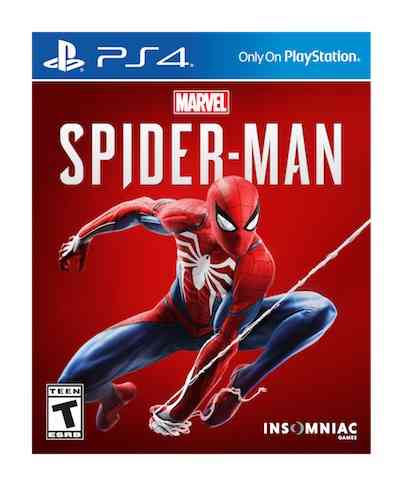