It’s no secret that politics and gaming hardly mesh well. Grand Theft Auto is one of the many examples of games that get slammed for political humor, stances, and more. With the latest release by PanicBarn and No More Robots, to the list. Not Tonight sets itself into the same genre as the near cult classic Papers Please. You are a bouncer and you’re checking IDs, papers, and tickets to make sure that only good, clean people enter. This game manages to make an impression without breaking a single sweat. It will leave you speechless, you’ll find yourself engaged with every little detail.

Let’s talk about Not Tonight’s premise and its story, the latter being one of the game’s strongest points. The game follows the British nation after the controversial Brexit. A far-right government took over and brought the hammer down on non-english citizens. You, as what they refer to as, a “Euro” live in an awful, run down flat. You’re given a timeframe: one month to make your rent. You’ll make your money by taking low-paying jobs as a bouncer for various venues. Pubs, night-clubs, bars, and festivals. You’ve gotta make enough money not to get evicted; from your flat and the country.

The longer you go the deeper the story gets. You’re later contacted by the Resistance. The Scorpion. A mysterious entity bent on restoring Euro freedoms. Letters, visits, and more, you cannot escape their influence. At the end of the day, you’ll have some choices to make. What you do in game will affect your outcome in plenty of ways, so be on the lookout and be on your guard. The end goal is the New Year’s event, teased at the very start of the game and the end-point goal of your journey.

Games like Not Tonight are the kinds of games that I never knew I’d want. You would imagine that playing a game about checking IDs outside of a bar would be boring, and you’d be wrong. Something about what’s done here is addicting, but let’s start from the beginning.[Text Wrapping Break][Text Wrapping Break]Not Tonight starts with your character. You’ll have a lackluster character creation to go through before you do anything in the game. You get to choose from a few appearances and backstories. It’s a bit of a let-down that the backstory you choose doesn’t get mentioned or matter in any way at all. You can choose your appearance based on a few options. Bear in mind there’s limited customization at the very start. 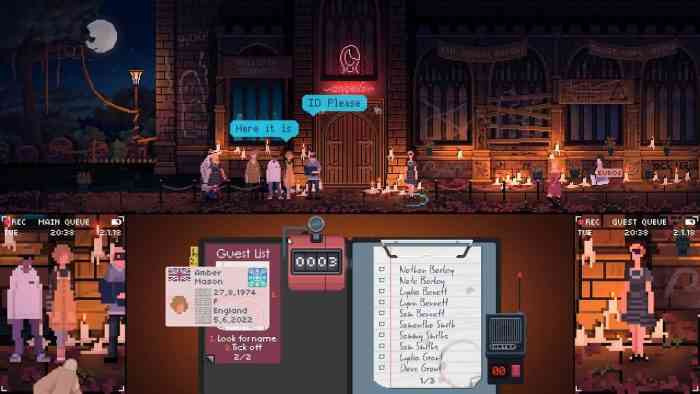 You’ll be making your money by being a doorman. In every job you’ll have lines full of people with IDs/tickets/etc to check. You’re issued grades based on your performance in a level. Let in as many good people as possible to reach bonuses for extra cash and bump up your grade. A watchful eye and your quick reflexes are your best tools. As you progress you’ll need to keep track of more people, red flags, and lines. It can be a bit overwhelming at points but patience and practice will net you the win.

Sometimes, after refusing a guest, they’ll attempt to bribe you to get in. Be mindful that your Social Credit Score will go down if you take one. This and other nefarious actions contribute to your SCS. Don’t let that fall too low or you’ll face the consequences. I have to make a note of how satisfying it is to turn people away, especially after bribes. Gotta enjoy the little things.

I do need to touch on the game’s auto-save and load system. Sometimes you’ll quit to the menu to load your autosave and restart. The game makes each new load take up one of the three save slots you have. This means that to load your game you’ll need to delete another. This is annoying when you want to restart as you’ll need to delete another save before loading. You can’t delete a section or part of your file either. Your autosaves will stack up as you play, making loading take longer. The save system needs refining to better work with players. Sometimes the random aspect of the game can lead to you missing out on a milestone for a level too. It can throw several bad people at you in a row during your last call and waste precious seconds to make the bonus rate.

Much like many of its kind, Not Tonight looks great with its pixelated style. The animations and graphics are spot on despite the faceless models. Some of the characters can make checking photos on the IDs tough. None of this is annoying or detracting by any degree. The music is also spot on, every song tailored for the style of level. On top of that, if you’re feeling like listening to it again buypurchase a radio. I imagine that the licensing rights for some of these songs would be a nightmare. I don’t actually recognize any of them though. Regardless, keep an eye out for the soundtrack. These elements together make the visuals all-around appealing and pleasing. Some of the items in the lower interface can be cluttering and make looking at things tough. You might have some trouble grabbing and moving cards and tickets at first too. Like before this doesn’t detract much from what are some good pixel graphics.

All talk, conjecture, and analysis aside Not Tonight is great. As I stated before, if you liked Papers Please you’ll love this game. You don’t even need to be into the graphics or politics to get a kick out of this game. Not Tonight delivers pure-bred fun and challenge in a way that rarely, if ever, feels cheap. The game is well worth your time picking up if you can manage to push through the massive pool of levels. The game’s completion time gets hammered down if you don’t restart like I do. Bear that in mind when you play. Keep away from all the politics and coming controversy and you’ll be more than satisfied. PanicBarn’s creation is something I’ll recommend at length. I need to unwind now. Tea, anyone? 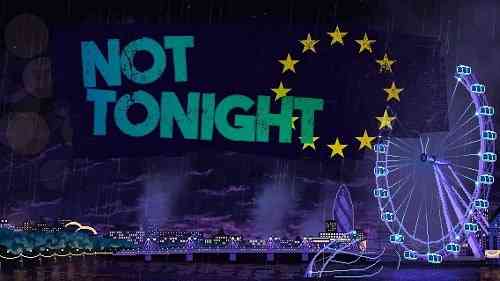 The White Raven, Tactical RPG, Funded With 48 Hours Left On Kickstarter
Next Spider-Man Review – The Best Superhero Game Ever
Previous Brawlout Review – It Brawls and Falls