Magic: the Gathering, as of late, has found great success in bringing other properties into their game. The most recent set: Adventures in the Forgotten Realms, was a Dungeons & Dragons – themed main set release, and there was also a selection of exclusive, online-only “Secret Lair” drops featuring characters from The Walking Dead. Expansions for Lord of the Rings and Warhammer 40k are already on the horizon, and now, two new Secret Lair drops are on their way: one themed around Street Fighter, and one for Fortnite.

While the details on what the cards do aren’t yet revealed, we do know that the Chun-Li card with have a “Multikicker” ability – where players can repeatedly pay a cost to get multiple instances of a bonus effect. Considering the character’s fighting style, this is just deliciously on-theme. 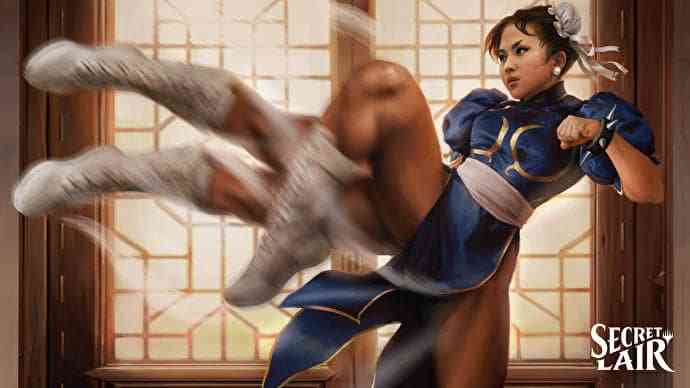 While reception to the reveals of D&D and Lord of the Rings expansions for Magic left fans excited, the Warhammer and Walking Dead reveals weren’t quite so warm. Many players lamented the idea of mechanically-unique, non-Magic cards breaking up the game’s fantasy aesthetic – especially when those cards are a timed exclusive release, as was the case for The Walking Dead’s drop. Wizards has said that those cards won’t be mechanically unique forever, but to date, we’ve yet to see that promise materialize. And with the Street Fighter expansion opting for the mechanically-unique route as well, we are likely to see a repeat. That path is one the Fortnite expansion won’t be taking, however – those cards will be reprints of existing Magic: the Gathering cards with Fortnite-themed art, so players won’t feel the need to add Fortnite’s cast to their decks if they don’t want to.

Clearly, the Walking Dead expansion was financially successful enough to bear repeating. And since this Magic Showcase event also revealed a bunch of new core sets, it’s possible that we could see mechanically identical cards appear in the near future. But whether that’s a solid prediction or wishful thinking is yet to be seen – the only way to know for sure is to wait and see.